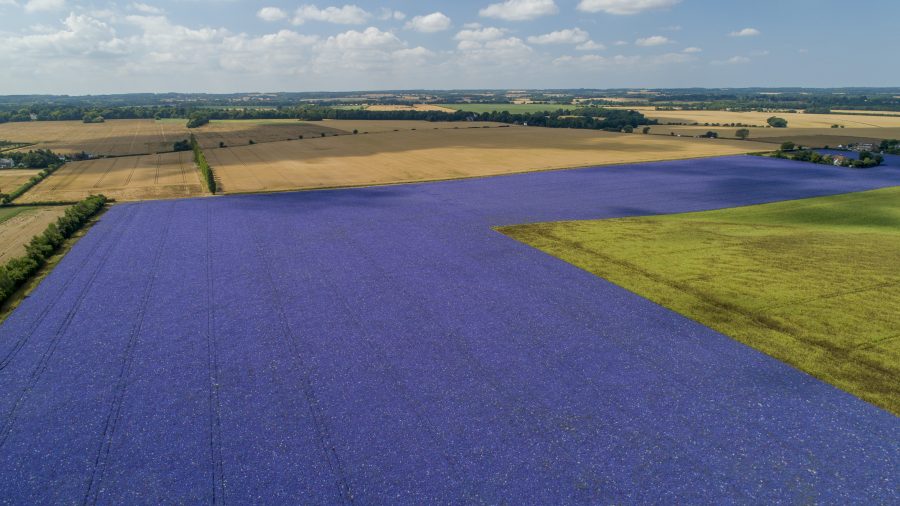 A highly versatile block of first-class arable land has been put up for sale and could represent a litmus test for the UK land market, with domestic and global food security rising up the agenda and demand for farmland surging.

The 306 acres at the Lees Court Estate, stewarded by the pioneering farmer and entrepreneur The Countess Sondes, gives would-be buyers a rare opportunity to acquire Grade I land at a time when ground of such quality is seldom on offer, since it is estimated that only about 3% of England is classed as Grade 1.

The American born Lady Sondes, recently described by Tatler as “the most glamorous and intriguing character in the British aristocracy today”, has established a reputation as a world leader in integrating non-food crops alongside conventional food production. The land’s rotation has recently included echium, a purple coloured crop used in the skincare, pharmaceutical and baby food sectors, which has delivered significant environmental benefits.

It represents the first time this land at Faversham, marketed by Strutt & Parker as a whole or in two lots for £3.4m, has come to the market in the estate’s 800-year history.

Mark McAndrew, Head of Strutt & Parker’s National Estate and Farm Sales Team, said: “At a time of considerable economic uncertainty, affecting almost all investment sectors, farmland stands out as a hugely attractive option. There is certainly a growing appetite for UK farmland from a wide range of buyers, resulting in recent reports of top quality farms and parcels of commercial land selling for significantly more than their guide prices.

“Farming and food security have never been more at the forefront of global sensitivities – as highlighted by the attention given to the sector by the two remaining Prime Ministerial candidates – so the most productive land is likely to be increasingly sought after.

“It follows growing tensions within the rural community about what has been felt by some as a drive to push rewilding over food production. This is land capable of growing a wide range of crops, which is becoming evermore crucial as farmers seek ways to diversify their farming systems against the backdrop of extreme weather, supply chain disruptions and changes in agricultural policy.”

Adding to the appeal of the property is the sensitive and considered regenerative farming approach that Lady Sondes has taken over many years, which has ensured the land is in excellent heart for successive generations.

The estate has found that including non-food crops such as echium in the rotation has been hugely beneficial to pollinators, birds and other wildlife and helped to protect and enhance soil health. It is land that has demonstrated its productive potential, producing high-yielding conventional cereal crops while delivering award-winning conservation and biodiversity benefits.