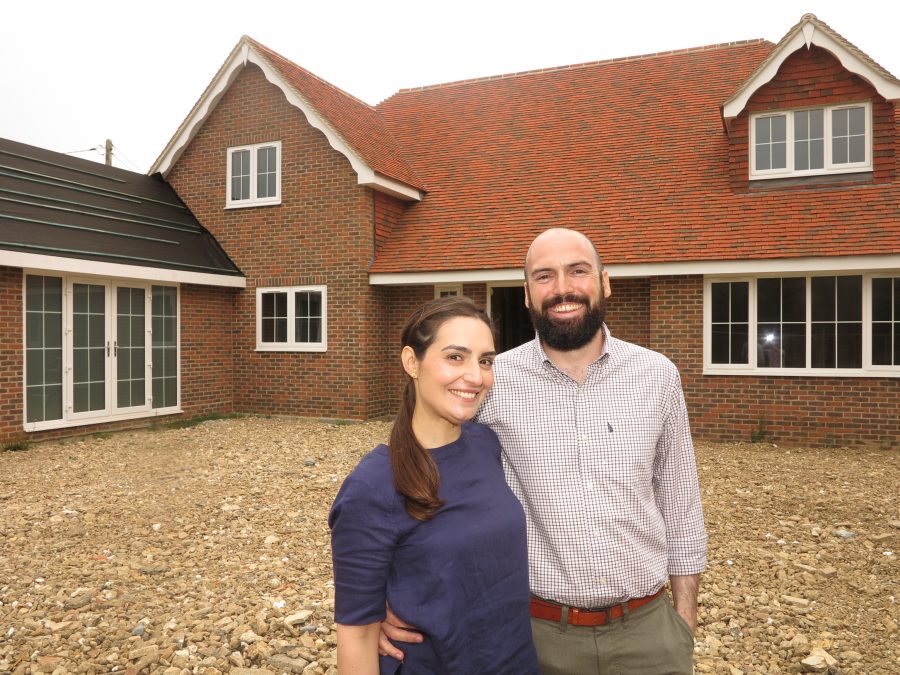 “Every pilot knows that there is only one situation in which you have to do things in a hurry, and that’s when the oxygen fails. Otherwise, even if the aircraft is on fire, you work methodically through a checklist,” Ryan Saunders explained.

He wouldn’t have known it at the time, but the methodical approach he learned to adopt in his first career now stands the former commercial pilot in good stead in his new role as a planning and development consultant.

His encyclopaedic knowledge of his subject – something which was equally vital when flying aircraft for a living – allows him to find the best solution to planning challenges facing farmers across the South East.

He set up the business, Saunders Rural Solutions, based near East Grinstead in Sussex, as a way of combining his master’s degree in Town Planning with his experience in rural surveying and his family’s farming and construction background.

The successful combination is supported by partner Chiara’s background in journalism and PR. She carries out policy research and then uses her skills to help craft a story that puts the farmer or landowner’s application over to the deciding body in a convincing way.

“We were asked to support an application to allow an alpaca farmer to live on site,” she explained. “After researching the gestation period for crias (young alpacas) I was able to support the application by pointing out that after spending 11 ½ months waiting for the arrival of a valuable, newborn alpaca, the farmer really wouldn’t want to risk not being on site during an overnight birth.”

That ability to explain ‘technical’ issues in an accessible, ‘human’ way, together with a clear focus on making sure all the questions are answered and the boxes ticked helps Saunders Rural Solutions achieve the best possible result with the authorities that make the decisions that can have such an impact on farmers’ lives and livelihoods.

“Planning officers are busy people. You need to make their lives as easy as possible by understanding the relevant criteria and making sure you meet those criteria and by providing every last bit of information they need. Then you need to make your case in a convincing, real-world way,” explained Ryan.

Ryan’s parents, Charlie and Beverley Saunders, worked in farming and construction, but at the age of 21 Ryan gained his commercial pilot’s licence before working in the industry for 10 years, as well as training others.

It was a rewarding but high pressure job, and at the age of 30, after deciding the time was right to move back into the world of farming, Ryan began working with a well-known rural surveyors firm and studying for his master’s degree.

His plans could have been derailed when Covid-19 struck while he was studying, which meant the role he expected to move into no longer existed, but with typical ‘checklist’ calmness, Ryan finished the course, qualified and decided instead to set up his own business in partnership with Chiara.

His Master’s dissertation focused on the use of permitted development rights to support farm diversification, something he has put to good use in the new business.

Ryan’s family moved to Morgans Farm two years ago, with the 66 hectares and additional rented land now being farmed by Ryan’s brother Ross and his fiancée Kate, a veterinary surgeon. The farm included a late sixties-built bungalow that was structurally unsound and would have cost a huge sum to repair and so Ryan applied for a replacement dwelling on behalf of Ross and Kate.

While a like-for-like application would have been automatically approved, Ryan used his skills to gain approval for a smarter, larger home and office, making sure it met all the relevant national and local policies.

The original agricultural occupancy condition (AOC) had lapsed because the previous owner had not fulfilled the condition, but Ryan knew that as soon as Ross moved in, it would have automatically been reactivated, so he took the precaution of getting that removed as part of a successful application for a new farmyard, four new barns and supporting infrastructure for the cattle and sheep operation.

Early in the company’s life Ryan acted for a smallholder who was using two shipping containers to store woodland maintenance equipment. Neighbours had claimed the containers represented permanent buildings and should be removed.

The local council initially agreed, pointing out that the containers had been there for several years, at which point Ryan proved they had been there for more than ten years and successfully applied for a Certificate of Lawful Existing Use or Development.

On a nearby farm, the owner wanted to create a forestry track to get into woodland in order to remove fallen trees, tackle an outbreak of ash dieback and plant more woodland as part of The Queen’s Green Canopy initiative. Despite a favourable report from an arboriculturist, the local council was unhappy about the planned track going within 15m of the boundary of nearby ancient woodland.

“A track that stopped 15m away from where it needed to be wouldn’t have been much use to anybody, so I prepared a long-term woodland management plan in association with the Forestry Commission and the council backed the scheme,” said Ryan. “It took a patient approach but by exploring all the options we achieved the desired result.”

It is that patient and knowledgeable approach that underpins Saunders Rural Solutions’ approach. “I’ve not met a farmer yet who isn’t smart enough to do what I do, but they lead busy lives and can only focus on one thing at a time. While they are looking after their crops or animals, I can help with their next project.”

Ryan, who also handles housing development applications, planning appeals and a wide range of other development issues, prides himself on a flexible approach and is happy to chat to farmers outside normal office hours. “We know how busy the farming life is – and we’re here to offer help whenever they need it,” he commented.