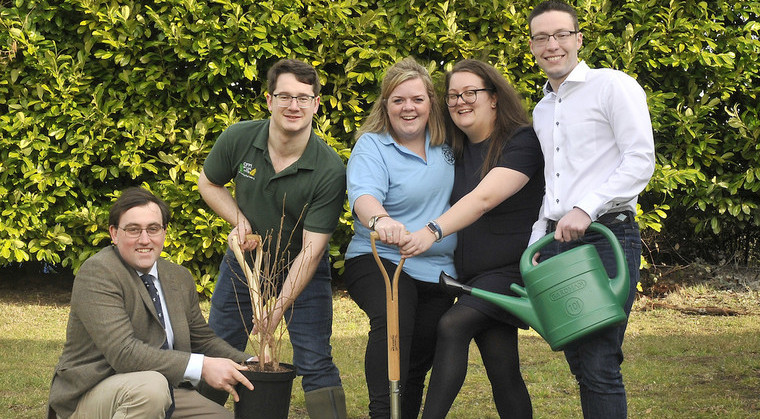 Members of Young Farmers’ Clubs (YFCs) from across England and Wales are planting more than 9,000 trees over the next two months to help in the fight against climate change.

Sixty YFCs, involving members aged 10 to 26, will be involved in the planting of the sapling trees, supplied by The Woodland Trust, with many YFCs aiming to plant a tree per member.

The project is part of a national YFC initiative called #ProtectYourFuture, launched by YFC members earlier in the year.

Young farmers chose to plant as many trees as possible as their contribution to making a positive impact on the environment for the next generation. The campaign was launched by NFYFC earlier in the year and supports the Government’s Year of Green Action.

YFC members will be planting trees to support local community projects, such as at a learning disability centre, supporting the landscaping of new grounds at a local football club, community farms and improving habitats along a river.

Katie Hall said: “YFCs ordered sapling trees from The Woodland Trust earlier in the year, so it’s amazing that 60 of our clubs are now receiving the packs and starting to plant the trees.

“This year YFCs have been focusing on ways to improve the environment through our Protect Your Future campaign and it’s great to see so many of our members making a positive impact on their local environment. The trees are a real symbol of hope for the next generation.”

“The Woodland Trust is delighted to be working with NFYFC to get so many trees in the ground across the country. Trees play a vital role in our lives. They provide shelter and shade, protect our soils, filtrate our water, provide a home for wildlife, add value to our streets and give us a place to relax and unwind.

“They play a pivotal role in the fight against climate change, cleaning our air, storing carbon and producing oxygen, and that’s why we need them like never before. We hope as many people as possible will follow the example of the young farmers up and down the country, plant trees and dig in for all our futures.”

The government launched its 25 year environmental plan in 2019 and started with a Year of Green Action driven by the #iwill4nature campaign.