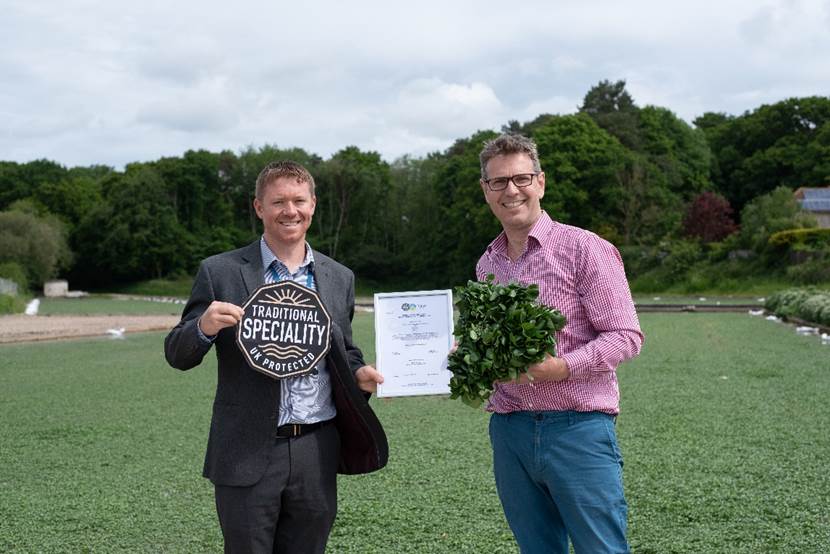 The Watercress Company, with farms in Dorset, Hampshire and overseas has become the first watercress grower in the world to be successfully audited against the new Watercress TSG specification (Traditional Speciality Guarantee).

The TSG guarantees watercress has been grown to the standards and methods that it has done for generations.  This method of production protection is similar to the locational protection awarded to Cornish Pasties or Melton Mowbray Pork Pies which have a Protected Designation of Origin (PDO).  TSG status means that finally only watercress grown in flowing water will be allowed to be sold as watercress in the UK with a pending application to get it registered in the EU as well.

The process to be granted a Geographical Identification for their crop began 10 years ago after traditional growers like The Watercress Company had spent decades promoting watercress and its health benefits and, as a result, watercress was growing in popularity.   As demand grew however, new growers started to take short cuts and began growing cress on land or indoors on benches with no flowing water and passing it off as watercress.

The NFU Watercress Association, was determined that the traditional way that watercress had been grown for thousands of years by medieval monks living in monasteries by rivers, and by farmers for hundreds of years, should be protected and recognised.

Following the successful adoption of TSG for watercress in September 2021, Dorset Council Trading Standards began an auditing programme to establish whether the farms run by The Watercress Company met the required standards and on 22 April 2022 they became the first grower in the world, to be officially recognised as TSG certified.  This certification will be valid for two years before another audit will be conducted.  Since this first audit, other growers have been passed and cleared for TSG compliance too.

Tim Evans, Senior Trading Standards Officer for Dorset Council said: “This was the first audit against the new Watercress TSG specification. The Watercress Company is a significant player in the watercress industry and has multiple growing sites in the UK and overseas. The audit focussed heavily on the characteristics of the plants being grown and the physical properties of the beds in which the crops are grown, including the water source and channels.  We fully support schemes such as this that help to protect and promote traditionally grown foods and I’m delighted to be able to present TWC with this certificate’.

“It is a traditional practice that has been done the same way for thousands of years, with care and enthusiasm.  Some of our customers may not be interested in how watercress is grown, but I believe the majority are passionate about its health properties and the ecological way it is produced, and it is entirely fitting for it to be recognised in this way.  When they see the TSG logo on packs, it will give consumers absolute clarity, and confidence, that what they are buying is the real deal.”