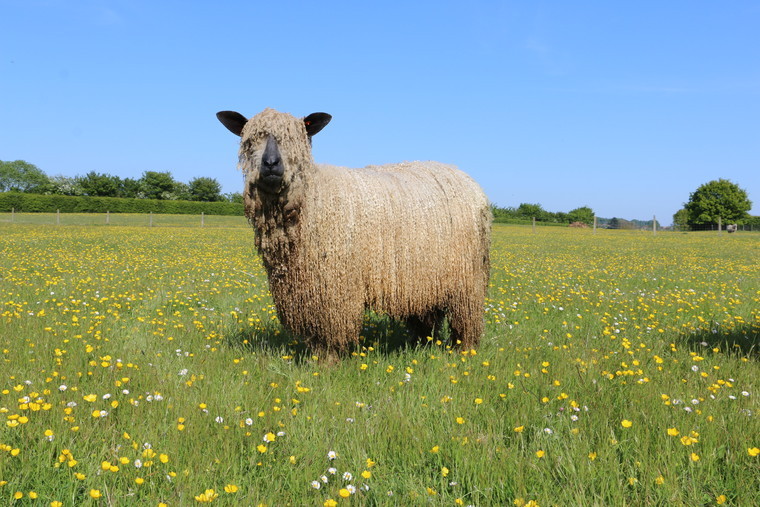 Sandra Brown, who is now, at the age of 78, reducing the Wensleydale flock she keeps at her smallholding just outside Ashford in Kent, is selling wool privately at close to £20 a kilogram, and recently sold two of her flock, with fleeces, for £250 apiece.

In 2017 – well before coronavirus was even heard of – one of Sandra’s black Wensleydale fleeces went on to be named Reserve Champion in the British Wool Golden Fleece competition after winning at the Kent County Show.

The National Sheep Association, meanwhile, has said it is “disappointed” to see the impact of the coronavirus on wool prices. Chief Executive Phil Stocker commented: “It’s not fully clear how the reduced value of the remainder of the 2019/20 clip will affect the overall value of a farmer’s wool delivered last year, but it would be easy to assume total fleece values might be down by 50%.

“Although there are plenty of sheep farmers who do get real value from their wool, most will at least expect it to cover shearing and wool handling costs. A fall of 50% of total value would, for most, mean total income not clearing costs.”

With the global market for cross-bred wool shut since February, British Wool has said around a third of its 2019/20 clip of 27 million kgs remains unsold.

The average price paid to producers for the 2019/20 clip will be 32p/kg, with balances paid as normal when this season’s wool is delivered. It will not be making an advance against 2020/21 clip wool, instead making full payment for 2020/21 clips from May 2021 onwards.

In a plea to farmers to stick with the national marketing agency, it said producers marketing their wool through British Wool “represents the only realistic prospect of improved prices on a national scale in the medium and long term”.

Meanwhile the Rare Breeds Survival Trust has launched a new five-year conservation programme to reverse the decline of the Longwool sheep breeds native to the UK – including the Wensleydale.

In the latest RBST Watchlist, published in April, six of the nine native UK Longwool sheep breeds were classified as ‘vulnerable’ or ‘at risk’. While Greyface Dartmoors and Border Leicesters have seen positive growth in numbers, breeds such as the Lincoln Longwool and Leicester Longwool have declined, with just 251 Lincoln Longwool breeding females registered in 2019.

The Trust has said it will work with breed societies to increase the diversity within each breed, work to limit inbreeding through bespoke breeding programmes and employ cutting-edge conservation techniques and technology to safeguard the breeds.