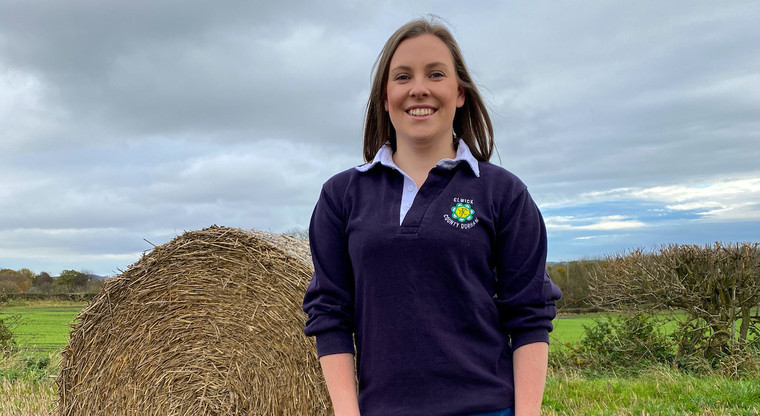 A new awards programme launched by The National Federation of Young Farmers’ Clubs (NFYFC) has recognised the achievements of rural young people during the pandemic and praised the efforts of those who have gone above and beyond in the past 12 months.

One category – the Heart of YFC Award – shortlisted three finalists and left the decision to the YFC community to vote on who they felt most deserved the title. Katie Sanderson from County Durham Federation of Young Farmers’ Clubs received the most votes for her dedication to Elwick YFC and the wider Federation. The small club nearly folded a few years ago due to a limited number of members but Katie’s passion and enthusiasm has encouraged new members to join and thrive in the organisation.

Katie, 27, said: “I am absolutely over the moon and so thankful for everyone that voted for me. My passion for YFC is in my blood – my grandad was one of the first members of my small club Elwick YFC back in 1933. He would be so proud that I have achieved this award – especially as it’s my final year of YFC in membership age.

“We got to one point a few years ago when it was only me and my sister going to club meetings and it would have been easy to call it a day. There was no way I was going to let that happen, especially knowing where the roots of Elwick YFC came from. We did a lot of recruitment in the village, at local events and in schools and we proved that you can do it.”

Other categories included the Community Supporter of the Year Award, which was won by Gwyndaf Lewis from Pembrokeshire. Gwyndaf, who tragically lost his mother to COVID-19 in April this year, went on to raise nearly £40k for the local ICU unit in Carmarthen.

Gwyndaf said: “I can’t believe I have won – it’s a massive achievement for me and my family. What I did to raise money wasn’t really for any awards, it was from the heart.

“Every year in May I try and raise money for different charities and I was supposed to be training for Ironman Wales, but as I couldn’t do that I decided to run 50k. I put a target of £500 but the support was amazing and we managed to raise more than £37k for the ICU unit that looked after my mum.”

Judges for the awards included TV presenter and farmer Gareth Wyn Jones, who helped to select the YFC Supporter of the Year Award. The winner was Jill Persey from Devon who had dedicated more than 40 years of her life to the organisation, helping to develop members’ skills and confidence in her local club Culm Valley YFC. After losing her daughter, Jill set up a trust fund in her memory to give rural young people access to training to further their skills.

Gareth said: “Jill shone like a beacon and gave all the judges goosebumps when we read her nomination form. She is truly an inspiration to the next generation of young farmers.”

Sponsors NatWest were involved in judging the Entrepreneur of the Year category and were impressed with the range of entries they received that showed a confidence to succeed – even during difficult economic times.

Ed said: “I didn’t really think about what I had achieved until I won this award, but I am proud. The contracting business keeps expanding, I have added a firewood business and I have also taken on a dealership as well, which has massively boosted the business.

“Being a member of YFC has given me a lot of confidence in dealing with people and there’s also a great network in the organisation,” added Ed.

NFYFC Chairman 2020-21 Dewi Parry said: “It has been a challenging year for everyone, but these awards have shown that even in the face of adversity there are still positive acts of kindness, creativity and entrepreneurship being shown by YFCs in our rural communities.

“There are so many inspiring individuals involved in the organisation and the YFC Achiever Awards have really helped to shine a light on them. Congratulations to all our winners and finalists – and a massive thank you to our sponsors NatWest.”

Ian Burrow, Head of Agriculture and Renewable Energy at NatWest – sponsors of the awards and National Young Farmers’ Week – said: “Here at NatWest, we have long supported the NFYFC and all it stands for. This year we were delighted to be part of the YFC Achiever Awards, what a wonderfully positive celebration of young talent, entrepreneurship and community focus during a very hard year for all of us. Well done to all the winners and the nominees; and a special congratulations to Ed Jones, winner of the NatWest Entrepreneur Of the Year Award.”

This was the first year NFYFC has held the awards but due to their success, the organisation plans to make it an annual occasion to highlight the contribution that YFCs make to rural communities and the agricultural sector.

To see details of all the finalists and winners, please visithere.