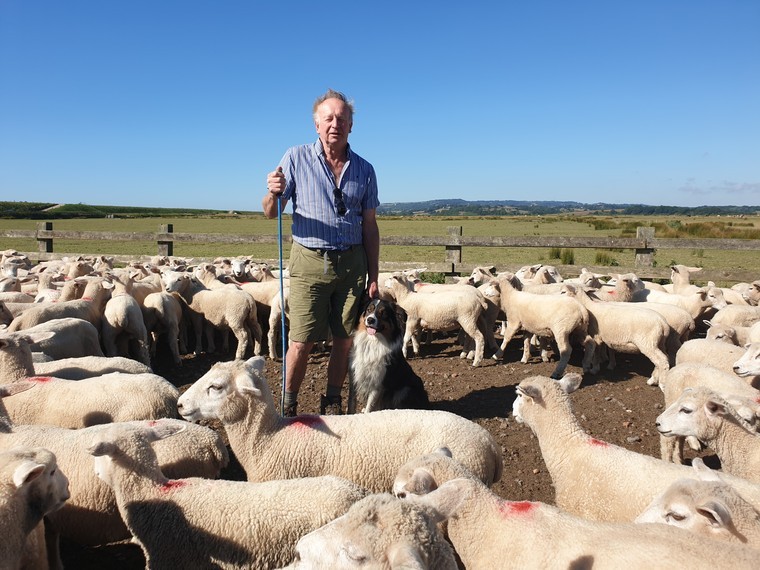 With 5,000 Romney ewes and a lifetime in the business, Frank clearly knows his wool. A former National Farmers’ Union council member for East Sussex and a trade negotiator in China in 2001, he can remember when half the family business’ income came from wool. He was also the driving force behind the world’s first online wool auction, a facility the British Wool Marketing Board still uses.

So, if not from the horse’s mouth, this comes, at least, from the sheep’s…

Anyone who tracks the price of wool will see that the highest prices have always been reached just before wars. The last time the wool price was very high was at the start of the Korean War, when the USA was still using the old pre-war planning blueprint which meant buying up all the wool in the world to make tunics and blankets.

The price of wool before WW2 did not go as high because the Government effectively requisitioned it at a fixed price. In return the Government promised the farming unions that after the war it would set up marketing boards and pay a guaranteed price. The British Wool Marketing Board (BWMB) is the only survivor.

The guarantee finished in 1992 and wool has traded at world market prices ever since. This makes it probably the only commodity farmers produce that has a true world value, although it is considered industrial rather than agricultural, which is why it attracts VAT.

The marketing boards were considered anti-competitive when Britain joined the EU, and so the BWMB sold all of its downstream activities, many in processing. It never owns the wool but acts as agent for the farmer/producer and sells the wool at public auction, returning the auction price less the marketing costs.

There are 22 auctions held throughout the year, each handling up to 1.5 million kgs. Wool is delivered to regional depots from May to the following January and grading can take until March, but the previous year’s clip may not be sold until June or even July the following year.

The BWMB now sells around 27m kg a year, well down from its heyday in the late sixties, when it sold almost 60m kg. The number of sheep, also affected by the axing of headage payments, have subsequently declined.

Over the years huge amounts of money have been invested in looking at new or alternative uses for wool. The UK has a relatively small clip compared with many other countries. China is the largest producer, followed by Australia and New Zealand, with many South American countries also significant. Wool, which, with cotton and other natural fibres, made up around 50% of the world textile market before 1940, now represents just 2%.

There are two main markets for wool, depending on how fine the fibre is. There are essentially only two base breeds of sheep, notwithstanding that the UK has more than 50 different breeds and wool types plus a multitude of cross breeds.

The Merino produces wool mostly below 25 microns. Until recently fine Merino wools were trading at record high prices as a luxury product for suiting and fine knitwear, including high performance sportwear.

The other market is for wool mostly from the Romney base breeds, the second most numerous worldwide and used historically for carpets, seat coverings and, at the finer end, chunky knitwear, often created by hand knitters. Most of the British Breeds fit into this mid micron category, with only some of the Down breeds and the Blue Faced Leicester having very fine wool. There is a small market for Futons and Duvets made from the Down type wools which are extremely resilient and have fantastic properties for sleeping on or under. The lowest quality wool is used for insulation.

So what has gone wrong with the value of wool, and why? In a word it is oil.

Once manmade fibres were invented, carpets and clothing became cheaper and cheaper, and with oil prices presently very low and not likely to increase, they will remain cheap. Extruding machines can work 24 hours a day with virtually no labour to produce a perfect fibre with none of the irregularities of a natural fibre.
Nylon, Polyester, Polypropylene and others have taken the place of wool at a low cost in our disposable society. I have a Brintons wool carpet in my sitting room which has been there for nearly 30 years and still looks fantastic. These days people change cheap polypropylene carpets every time they redecorate.

We had the greatest wool carpet manufacturers in the world, but sadly most of them have gone out of business. Axminster, which finally finished this year, made carpet for casinos, trains, aeroplanes and cruise ships. Unfortunately demand for carpets for the last two have now ceased. In the past, cruise ships would change heavily used carpets every two years and use higher specification and higher value wools. Wool will always be needed wherever there is a potential fire risk as it will not burn or give off noxious fumes, unlike all manmade fibres, which give off toxic fumes.

Wuhan, where Covid-19 is thought to have started, was also the centre of the textile industry in China, which probably buys and processes two thirds of the world’s wool.

Once manufacturing stopped, the commodity became worthless and the world’s auctions have had no customers since January. Australia has already built up a large stockpile of 100,000 tonnes, which makes our clip total look insignificant! New Zealand prices for wool they have been able to sell have been lower than those achieved by the BWMB.

Is there any hope for wool? It is an environmentally friendly product, a renewable resource and completely biodegradable. Plastics are destroying the planet and cotton, although a natural fibre, needs massive amounts of water and pesticides. Wool is a by product of the meat industry and sheep convert grass and forage to meat and wool very efficiently. If we are to become carbon neutral by 2040, then wool can be an important part of the journey.

I was Chairman of the BWMB for 11 years, until 2011, and in that time there were two women on the board. Any sheep farmer can stand for the board in each region, as long as they are proposed by ten registered producers.