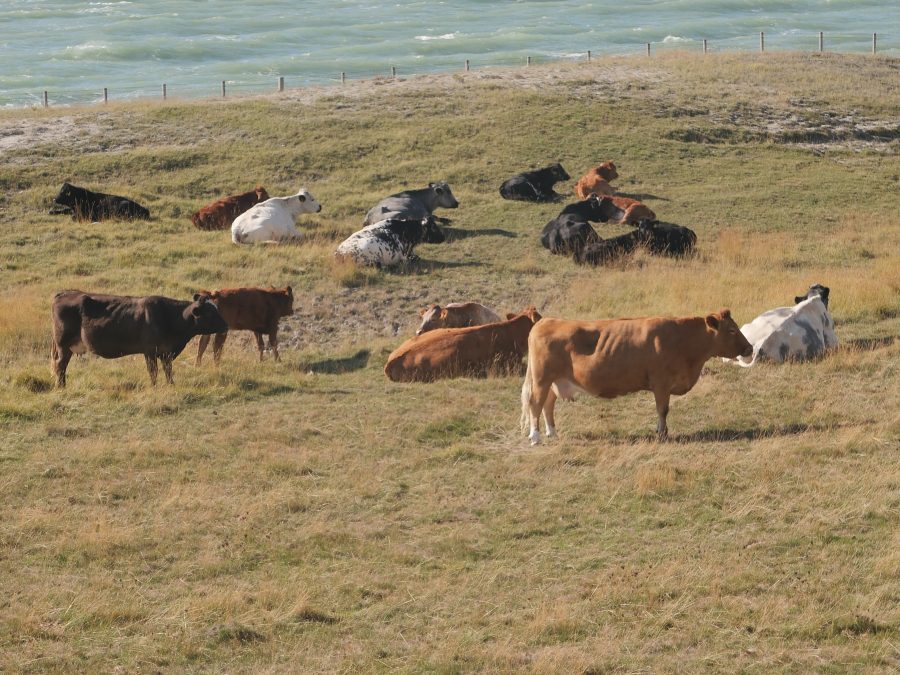 Albion cattle enthusiasts were treated to a guided tour of the newest part of Britain during an open weekend in early October.

Members of the Albion Cattle Society were taken around the Samphire Hoe nature reserve, a 90-acre site built up from the spoil removed during the digging of the Channel Tunnel, by White Cliffs Countryside Partnership ranger Paul Holt.

The site, now a unique wildlife resource, is used by local farmers for grazing native cattle and sheep, as well as attracting around 100,000 visitors a year.

Society secretary Susannah Mannerings said she had been delighted to welcome members of the group, which is dedicated to protecting and improving the numbers of the critically rare Albion breed, to a weekend that combined business with pleasure.

Those present, from a total membership of just 40, travelled to Kent from as far afield as South Wales, Somerset and The Peak District. After visiting the Speckles Albion herd Susannah manages with husband Keith at Chilton Farm, near Alkham – and lunching on Albion steer beef and Albion Halloumi cheese – the group held its annual meeting, at which ways of promoting the breed were discussed.

Sunday morning’s visit to Samphire Hoe saw highly entertaining ‘Ranger Paul’ identify numerous plants and bird species that now thrive on the land, as well as talking about the conservation grazing that takes place on the site. He pointed out that from 31 species of plant introduced to the site when it was created in the mid 1990s, the area now boasted some 220 species, including rare orchids.

Susannah’s mother, Dinah Whittingham, started the Speckles herd of Albions in 1993, introducing four correct in type blue cows from the Ryleys herd in Cheshire – then one of only two herds left in the country – to her 17-acre smallholding after the family farm was sold.

Three of the herd later moved to Susannah and Keith’s former farm near Winchester and proved to be impressive. “Our highest recorded lactation was Speckles Black Joanna, who gave over 8,000 litres in 305 days and also did 12 lactations,” Susannah recalled. The dual-purpose breed is also renowned for the quality of its meat.

Realising that efforts in the 1980s and 90s to get the Albions officially recognised were fading, Susannah took up the challenge following the death of her mother in 2010 and soon found herself at the head of a seven-year campaign that culminated with breed recognition by the Rare Breed Survival Trust in 2018. “The bundle of evidence that made up the application weighed 2kg,” Susannah added.

“We now have 34 pure Albion females plus another 14 Albion cross females along with 10 Albion and Albion cross steers. We also have 10 frozen embryos as well as one embryo implanted in a crossbred heifer,” she explained.