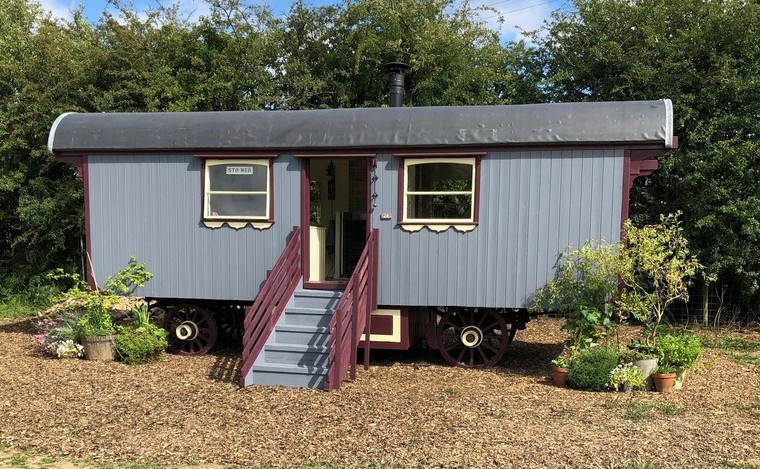 The TV appearance is the latest development in Paul’s colourful career which includes having done a five year apprenticeship as a harpsichord maker, being Head of the Cabinet and Joinery Workshop at Blenheim Palace, founding a mental health therapeutic horticultural project, establishing a goat farm and making raw artisan cheeses.

At 66 years old, many would have slowed down after a series of falls (when he was struggling to catch sheep) which finally resulted in his being diagnosed with having
myofibrillar myopathy, a very rare genetic form of muscular dystrophy.

Nothing would stop Paul, who lives in the Witney area and is described by his partner Katharine as very determined, talented and always able to make the very best of any situation.

Katharine who lives in Shropshire said: “In August 2018 he decided to develop his skills for restoring and making shepherd’s huts into renovating an ex-fairground circus wagon which he had found for sale on the coast in North Norfolk and which he managed to complete with the help of wonderful family and friends.

Described as a legacy project for his children and grandchildren, Paul’s wagon was originally a pantechnicon and would have been used in the late 1890s to transport circus/fairground tents and equipment around the country. Like many similar vans of that type, it was turned into living accommodation in the 1920s.

The project caught the attention of a TV production company used by Channel 4 who interviewed Paul and filmed his terrific achievement in managing to renovate the rotting wagon.

George Clarke is an architect, TV presenter, campaigner and the founder of the TV show Amazing Spaces.

He said: “It was honour to meet Paul, one of the most skilled and courageous people I’ve ever encountered. He didn’t give up when he was diagnosed with muscular dystrophy, instead he worked tirelessly to build something for his children and grandchildren to stand as a lasting memory to a true master craftsman.”

There were several challenges associated with the execution and completion of this project.

The first was regarding Paul having to come to terms with this disease from the physical and mental point of view and also with the extreme bouts of fatigue, his vulnerability to the cold and his inability to climb up steps and work at height. This equated to him having to relinquish some of the tasks that previously he would have been able to complete with ease; the loss of his undoubted ability and in a way he had to learn to let go and hand over certain tasks to the mercy of others.

“Ideally, we wanted to start in May and the September start meant we had to completely rethink the whole process (and the layout at the farm) as winter crept up on us. We had to reposition an existing “unit” so we could place the wagon parallel to that in order to brace the wagon against it, for two reasons.

The wagon was not the first horse drawn vehicle to be restored by Paul. Others include Governess carts; a horse drawn Bakers Cart and a traction engine Living Van.

Not content with this achievement Paul is now turning his smallholding over to operate as a market garden as he sees this is the best way forward to try and help the planet by growing sustainably produced seasonal vegetables for local people.

Now unable to walk many paces and much weakened by his condition he still needs family and friends to make this happen and also has like-minded volunteers from around the world, via the WWOOFer scheme coming to help; he says “it’s all very exciting.”

Nothing is ordinary about Paul and Katharine’s story; the couple who were each other’s first loves at school, finally ended up getting together again many decades later; Paul quips “I needed a fifty-year gap just to be sure!”