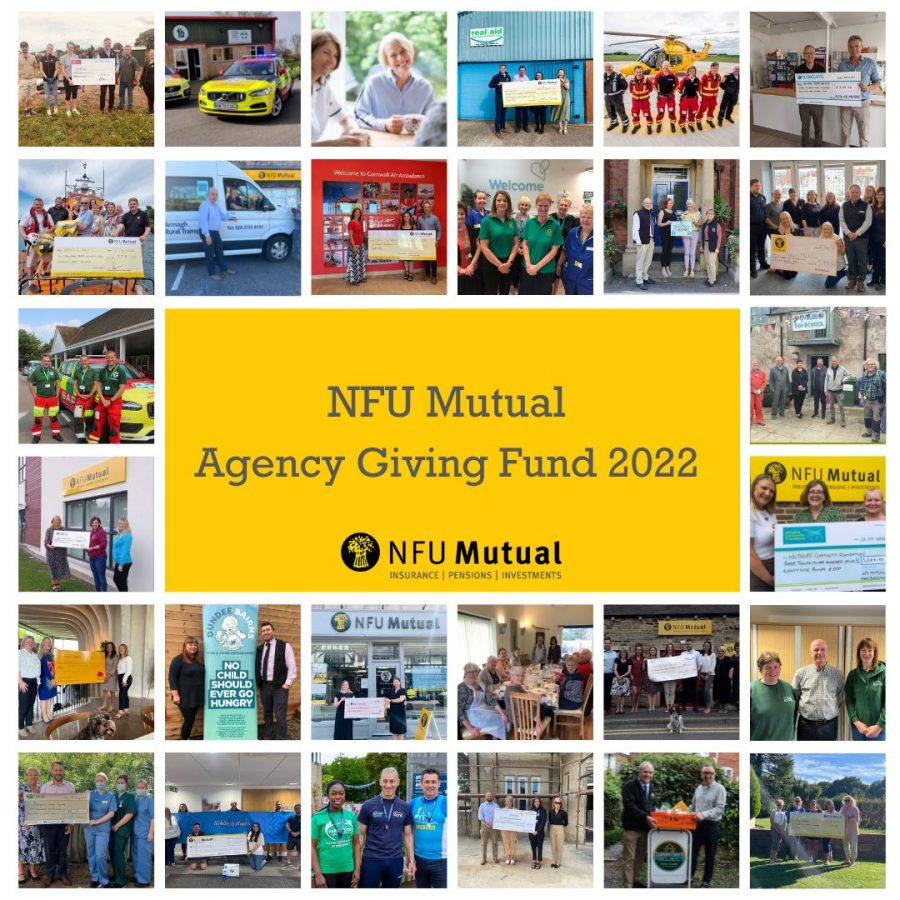 Rural insurer NFU Mutual is delivering £3.25m of funding for local and national charities in 2022. As part of this initiative, the insurer has donated £1.92m to local charities through its Agency Giving Fund.

This fund has now been fully distributed, supporting local charities and communities across the UK to stay strong and resilient. To ensure these donations reached all corners of the UK and were directed where they’re needed most, NFU Mutual’s Agency offices and branches, with more than 295 locations nationwide, were given the opportunity to nominate local charities to receive a share of the fund.

Almost half of the fund, £900,000, has been donated to charities providing emotional and social support. One such cause is Armagh Rural Transport, in Northern Ireland, who were nominated by NFU Mutual Armagh Agency. The donation is going to help fund specialist transport services for vulnerable people, so they can visit family and friends, attend their local GP or go to clubs and recreational activities.

£700,000 has been directed to charities providing healthcare, including 45 nominations for local community hospices and 27 nominations for air ambulance charities. Bronglais Hospital in Wales received a donation thanks to a nomination by NFU Mutual Aberystwyth Agency. This has helped the hospital’s Bronglais Chemo Appeal to raise the final amount to complete their construction fund of £500,000 to build a new, purpose-built, chemotherapy day unit for the local community.

The remaining funds, just over £320,000, were given to charities providing emergency food supplies and shelter, such as foodbanks.  Dundee Bairns was nominated by NFU Mutual’s Forfar Agency, and a spokesperson for the charity explained how this funding is helping local children in the area:

“We’re enormously thankful to our local NFU Mutual Agency for nominating us as such donations go a long way to supporting our community projects and feeding children across Dundee. Over the summer holidays we served over 37,000 meals. This has doubled from last year which is, sadly, a sign of the times but it is the generosity of our donors, fundraisers and volunteers that makes it possible to respond to the need for school holiday meal provision.”

Commenting on the community support measures undertaken by NFU Mutual for 2022, Nick Turner, Group Chief Executive of NFU Mutual, said: “Our Agency Giving Fund is a national initiative to deliver local support for our customers and our communities. We know that NFU Mutual Agents and their staff are best placed to identify causes in their local area who need support to deliver their vital service. Our key objective has been to direct this funding to where it really matters.”

Nick added: “The fund was first created in 2020 in response to the pandemic, and this ongoing support is helping to change lives, providing both emergency support and building long-term resilience. I’m really proud to see how the Agency Giving Fund is continuing to make a positive impact on the welfare of those who live and work in rural communities.”