» In the firing line 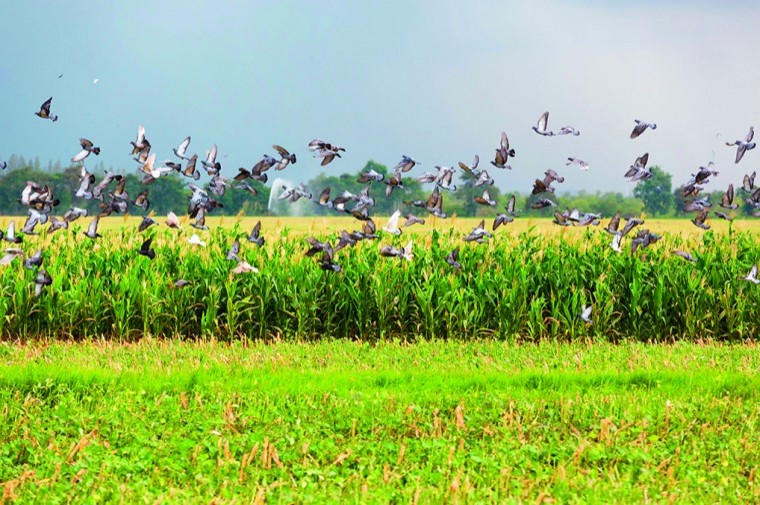 The temporary revocation of the licences (GL 04/05/06) was announced in a press release issued at 3.30pm on Tuesday 23 April and covers 16 species of birds including several members of the crow family (crows, magpies, rooks, jackdaws and jays), feral and wood pigeon and number of invasive non-native species (such as Canada goose).

According Natural England, the government body responsible, the change follows a legal challenge to the way the licences have been issued, brought forward by Wild Justice, which was formed in February 2019 to “fight for wildlife”.

The challenging of the general licences, the first of a “long list of projects” expected from the not-for-profit company, has been driven into the spotlight by TV presenter Chris Packham, a director of Wild Justice, and received funding from over 1,100 individuals.

In a statement on its website Wild Justice states: “We haven’t changed the law, we have merely shown that the current system of licensing of killing of certain species of birds, developed and administered by a statutory wildlife agency, is unlawful now and presumably has been for decades.”

Once the licences have been revoked, and until new licences are issued, anyone needing to control one of these 16 bird species, where there is no reasonable non-lethal alternative, will need to apply for an individual licence.

While Natural England say it is working “to implement alternative measures to allow lawful control of these bird species to continue where necessary”, with a new set of licences set to be brought in from Monday 29 April, the short notice of the revocation and confusion over what is to happen in the coming weeks is expected to leave farmers with significant problems.

Speaking on the action, which is the first stage of a planned review of general and class licences, Natural England’s interim chief executive Marian Spain said: “We recognise this change will cause disruption for some people, but we are working hard to ensure it is kept to a minimum. We will bring forward interim measures as quickly as possible as the first stage of our planned review of the licences. We want to make sure our licensing system is robust and proportionate, taking into account the needs of wildlife and people.”

While it is expected that, eventually, many situations currently covered by the three general licences will be covered by new licences, many are outraged by the incredibly short notice given by the government body. Tim Bonner, chief executive of the Countryside Alliance, said that it is: “completely impractical and irresponsible,” and will result in thousands of people unknowingly breaking the law.

“To withdraw the historic ability to manage these species without individual licences at 36 hours’ notice is a recipe for disaster,” said Tim Bonner. “Many of those involved in pest control will be unaware of the changes, and this decision will only serve to bring the law into disrepute. The decision to bring in a new set of licences without consulting stakeholders or the public is even more bizarre.”

In response to the chaos, Wild Justice said: “Natural England could have, and in our view should have, conceded the correctness of our legal arguments many weeks ago. This would have reduced the financial costs to the public and allowed farmers and land managers more time to adjust to the news that their bird-killing actions may have been illegal for several decades. This is a mess of Natural England’s making – they have operated an unlawful licensing system and they have dillied and dallied over admitting it.”

According to Natural England, in limited circumstances, people may be allowed to undertake “urgent action” in accordance with “the existing requirements of section 4 of the Wildlife and Countryside Act 1981”, but anyone exercising lethal control of birds after Thursday 25 April 2019 “without taking the above steps” and applying for an individual licence could be committing an offence.

Disappointed at Natural England’s decision, British Association for Shooting and Conservation (BASC) chairman Peter Glenser QC said: “The withdrawal of the open general licences will cause chaos and uncertainty in the rural community. To take such a step without consultation and proper notice is utterly unacceptable from a statutory body and leaves many people at risk of breaking the law at a crucial time of the year when their need to control pests could not be more pressing.”

Following a 55-minute phone call with Natural England on Wednesday 24 April, the association was left seriously questioning its future relationship and the value of its partnership with Natural England. BASC’s chief executive Ian Bell said that the “appalling” decision was similar to “changing the speed limit effective tomorrow and putting out a notice on the internet but no new signs”.

“It is quite frankly ludicrous to say people can apply for a license on the day the law changes,” said Ian Bell. “I have been able to ascertain that there had been no consultation with law enforcement agencies and BASC is following up with the police to get relevant advice for its members. I have made it clear to Natural England that it has failed in the role of a government organisation to protect otherwise law-abiding people.”

It seems that everyone has been largely left in the dark, which is frustrating for both farmers and their advisors alike. Having received numerous phone calls from his clients between the 23 and 25 April, Anthony Field, rural director at BTF Partnership, said that without more information it was impossible for anyone to offer comprehensive advice on the situation.

“We just don’t know what’s going on and have nothing to work from apart from the information in Natural England’s press release,” said Anthony, who specialises in agricultural and sporting property matters. “It is unclear whether the landowner will need to apply for the licence, or whether it is up to the individual who will be carrying out the pest control. I am not sure Natural England have truly understood the implications of its actions and I worry about the disconnection between it and the rural community. Not only has this change been implemented without consultation, but Natural England is already in a muddle over stewardship payments and we don’t know how geared up it is to deal with the administration of these changes and the flurry of individuals who will no doubt apply for an individual licence.”