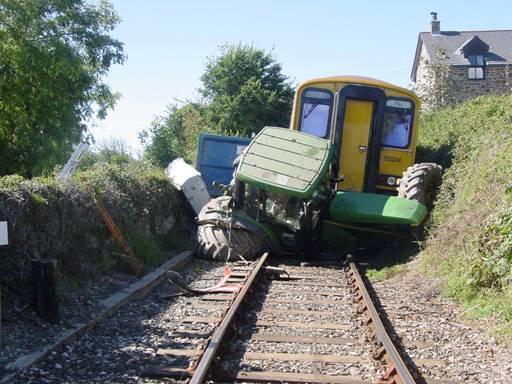 There are hundreds of user-worked crossings on farmland in Britain, which see a marked increase in traffic during the harvest season.
Figures collated over the past ten years reveal that the number of collisions and near misses at these types of crossings also sharply increases over the harvest months.

Since the beginning of June, Network Rail has recorded dozens of incidents of level crossing misuse on farm crossings. Fortunately none of these have resulted in collisions or serious harm but they have caused over ten hours of delays to rail services.

Vincent Briggs, level crossing manager for Network Rail, said “Harvest gathering is an extremely busy time for farmers, with level crossings that are seldom used during the rest of the year coming into almost constant use.
“While most farm crossings are used correctly and safely, that is not always the case and we have already seen a number of dangerous examples of crossing misuse this year.

“We’re asking farmers with level crossings on their land to make sure that everyone who comes onto their farm knows how to use the crossing correctly.”

National Farmers’ Union regulatory affairs adviser Ben Ellis added: “Farmers with land either side of the railway rely heavily on being able to use level crossings. We remind our members to follow the safe working procedures for the particular crossing, cutting corners can cost lives.”

General advice for the safe operation of a user worked crossing include:

• If there are no lights, stop, look both ways and listen before you cross. If there is a railway telephone, always use it to contact the signal operator to make sure it is safe to cross. Inform the signal operator again when you are clear of the crossing so trains are not unnecessarily delayed

• Train speeds can be deceptive. Don’t be fooled into thinking that you can beat an approaching train.