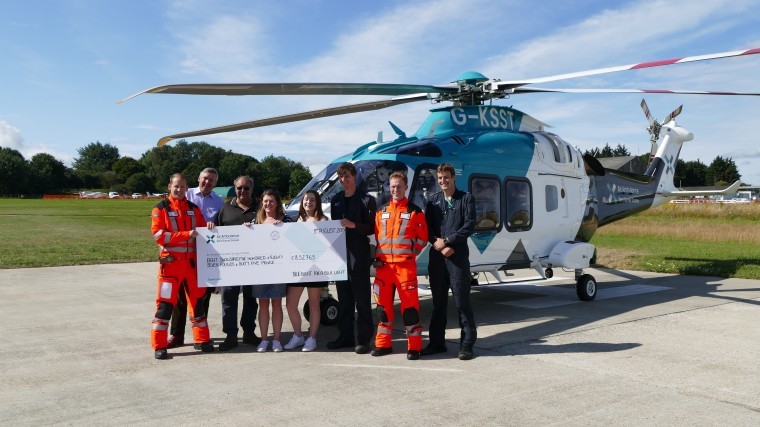 When his 28-year-old daughter, Jessica Hutchings, had an unexpected cardiac arrest while driving between fields during lambing season, Kent farmer Richard Vant was keen to “always be in credit” with the Kent, Surrey and Sussex Air Ambulance Trust (KSSAA), whose team rapidly responded to the remote accident.

“After being successfully transported to King’s College Hospital, London, Jessica was able to make a full recovery and despite the doctors thinking that she might be brain damaged, she has since gone on to raise two children and now works as a veterinary nurse,” said Richard. “The air ambulance saved her life and I thought we should do something in return.”

In 2018, Richard, who is well-known for telling jokes in his local pub, the Plough Inn at Stalisfield, was persuaded by a close family friend, Rebecca Ward (whose grandfather, stepfather and sister have also received lifesaving assistance from the KSSAA), to do a stand-up comedy sketch in aid of the independent charity.

“We have always said that Richard could fill the Marlow Theatre with his jokes,” said Rebecca, who is also in the process of becoming an official KSSAA volunteer. “Stalisfield is right on the North Downs, virtually in the middle of nowhere, and as most of the community work in agriculture too, we all appreciate how vital the air ambulance service is. With help and support from Debbie and Graham Dawson, Boyd Roberts, Bradley Waghorn, Lauren Alvey, Stephen Reid, Melanie Peek, Ray Giles and Abi Heathcote, the first event was organised in just three weeks.”

Around 120 tickets were sold for the first ‘Blue Night for a Blue Light’ comedy night, which also included entertainment from covers band Dockyard Rock, and together with proceeds from an auction and raffle of prizes generously donated by local businesses, it raised £6,026.25, which was presented to the Trust on 4 June 2018.

Three months later, Richard, who farms 600 beef cattle, 400 sheep and 400-acres of arable with his cousin and son at Rigshill Farm in Otterden, was out checking his sheep when he discovered that one of his friends, fencing contractor Tim Thompson, had become trapped between a tree and a machine in a neighbouring field. The air ambulance once again attended, and air lifted Tim to King’s College.

Following Tim’s recovery, in April 2019, Richard and Rebecca decided that they needed to organise another fundraiser. Armed with fresh comedy material “not for the faint hearted or easily offended”, a reappearance from Dockyard Rock, fish and chips from the Chequers Fish Shop in Lenham and 50 prize donations from companies, such as Crawfords, FGS Agri, Hush Heath Vineyard, Pett Farm Porkers and Pluckley Farm Shop, over 130 tickets were sold for the second ‘Blue Night for a Blue Light’.

Being the second year on the trot, the organisers hoped to raise “perhaps one or two thousand” from the evening, which took place at Stalisfield Village Hall on 4 May 2019, and were elated when the final total came in. On Thursday 8 August 2019, Richard, Rebecca, Boyd Roberts, who helped to organise the event, and Lauren Alvey, who gave her time to run the bar, travelled to Rochester Airport to officially present the Kent, Surrey and Sussex Air Ambulance Trust with a cheque for over £8,500.

“To have raised so much money in one night is impressive and to have done it for two years on the go is even more so,” said Richard. “The village hall was full to capacity both times and more than anything I would really just like to thank everyone for all their support. Everyone has chipped in; it is an amazing achievement and I am incredibly grateful to those, especially Rebecca, who helped to organise it and to those who generously gave donations for the auction.”

Lynne Harris, executive director of income generation, Air Ambulance Kent Surrey Sussex, said: “The organisers of ‘Blue Night for a Blue Light’ epitomise the amazing work of fundraising that we see across our region, without which we wouldn’t be able to operate as we do. It costs over £11.4million each year to fund our life-saving work and every pound raised makes a difference. Thanks to the commitment of this group, the £8,527.65 raised could fund around 70 units of blood used to treat life threatening injuries at the scene and on the way to hospital.”