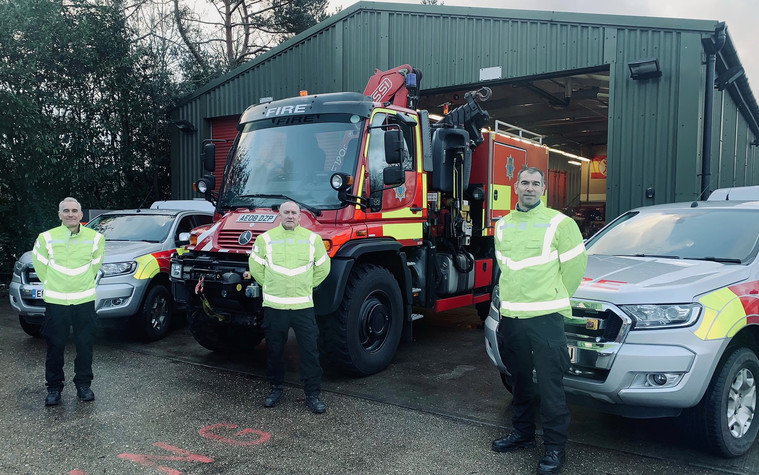 Adrian Kirkpatrick is also a crew manager with West Sussex Fire Service’s highly equipped and impressively well trained Technical Rescue Unit, and in that capacity he knew that his team could have rescued the animals quickly and efficiently and without putting anyone at risk.

“As someone with livestock myself, I could understand the farmers involved being desperate to rescue their animals from danger, but at the same time I know that without the right equipment they will always put themselves in danger in doing so,” he said.

“We have a skilled, highly equipped, totally free service standing by to rescue animals from situations just like this, complete with equipment like rescue paths that allow us to walk on slurry, and we really would rather farmers called us out in the first instance.”

The unit’s beginnings date back to 2001, when it was set up as part of the global response to the 9/11 terror attacks in the United States.

Backed by government funding, the aim was to create a specialist unit staffed by firefighters trained to deal with situations such as collapsed buildings and confined spaces. Firefighters volunteered to join the 12-person team, which was also geared up to offer support overseas in disaster situations.

From urban search and rescue, the unit’s skill set increased, adding rope rescue, cliff and crane situations and working in water and in confined spaces – such as farm silos – to the list of specialist incidents to which it could respond.

“At that time there were two fire stations in West Sussex that had some animal rescue equipment, but the service was a bit fragmented and if a call came in from a farm it took that particular fire engine off the roster,” Adrian explained. “So the decision was taken to consolidate that equipment into the Technical Rescue Unit, at which point animal rescue became part of our remit.”

Such rescues are now a regular part of the team’s duties, with calls to farms and equine centres to deal with riders trapped under horses, animals in distress in horse boxes, and livestock in slurry pits or in rivers at the bottom of steep banks.

It often comes down to a calm approach from an experienced team. “We were called out to find a showjumper had tried to leap a five-barred gate but had come down straddling it and was completely stuck,” said Adrian. “The people were making all kinds of dramatic suggestions, including anaesthetising the horse. We just took the gate off its hinges and laid it down flat, at which point the animal walked away, none the worse.”

The unit is based in Horley, close to the Sussex/Surrey border and prides itself on a swift response across the county. It’s arguably even more responsive overnight, since each member of the four-strong, on call team takes one of the unit’s specialist vehicles home with them.

Those vehicles comprise two Ford Rangers, one kitted out for animal rescue and the other designed for water rescue and holding rafts, inflatable paths and lances, and two panel vans. One van is equipped for rope rescue and the other houses chain saws and a drone for incidents involving fallen trees.

“We are incredibly well equipped and we have the training to match,” Adrian commented. “It’s why we really would rather farmers in this part of the world called us before putting themselves at risk.”

Adrian’s interest in farming – and in South East Farmer – stems from the fact that he has a smallholding at Crawley Down where he and partner Sophie Baker keep a small number of animals including pigs, cows, sheep and alpacas.

Owning a smallholding was not something Adrian had ever expected. “When I was growing up, I used to help out on a local ‘farm’ owned by an elderly lady,” he explained. “I looked after her assortment of animals for many years, continuing to go over there when I was on leave from the Army. When she died, she left it to me.

“Combining that love of animals and interest in farming with my day job helping to rescue livestock from difficult and dangerous situations is a privilege and one that I really enjoy.”

To use the service, just dial 999 and explain the situation.