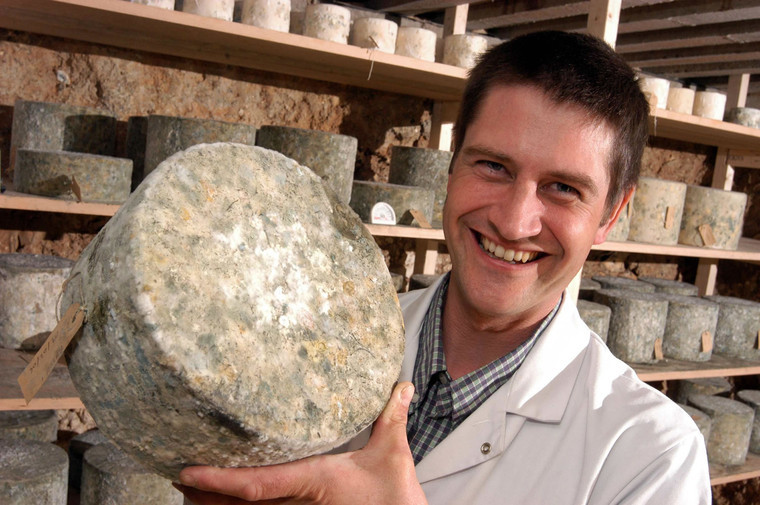 Many cheesemakers have switched to home deliveries or selling through local farm shops, but the extra time involved has made juggling farming with cheesemaking and fulfilling orders a tricky task against a background of unpaid milk bills and slashed order books.

Robin Betts, from Winterdale Shaw Cheesemakers, based at Wrotham, near Sevenoaks in Kent, described the coronavirus-inspired crisis as a “perfect storm” that had seen the collapse of the food service market at the same time as milk buyers had been forced to cut production, delay payments and reduce prices.

Robin, who runs the cheese side of the business with wife Carla while brother Nigel and sister-in-law Fay look after the milking, said that on the first Sunday after the enforced closure of restaurants and cafes he had been forced to ditch 3,500 litres of milk when he was given two hours’ notice that it would not be collected.

Since then the company has switched to selling its Winterdale Shaw cheddar through the farm shop, which now opens daily instead of only on Saturday mornings and has been dealing with orders from farmers’ markets. But it takes time. “I used to just put a wheel of Winterdale in the back of the van. Now I have to cut it into scores of different pieces, pack it and send it off to individual customers,” he said.

“It’s OK to talk about switching our focus, but it’s not quite as easy as that when you are also trying to juggle farming and cheesemaking. Local people have been amazingly supportive, though, and we are managing to keep our heads above water.”

Robin, who pointed out the irony of the fact that the company had deliberately only targeted London outlets because Winterdale Shaw is carbon neutral and he wanted to keep food miles as low as possible, said (in early May) that he had just received the balance of February’s milk payment.

When the long-awaited March and April payments do arrive, they will be based on reduced rates. The farm uses about a third to a half of its milk to make cheese but sells the rest through Freshways.

“We thought we were doing the right thing by diversifying into specialist cheese, but we didn’t anticipate the whole of London being closed down by Covid-19,” he said. “Most of our cheese is now still in the cave but we are selling some locally and doing our best to come up with new products, including butter.”

The farm has also been able to access government support because the cheesemaking side of the business is rateable. “We are lucky in that respect,” he said.

For Mark Hardy at High Weald Dairy, near Haywards Heath in West Sussex, the story has been more positive after the business quickly shifted its focus to home deliveries and farm shop sales.

“Most specialist cheeses are sold to the food service industry, delicatessens and supermarket cheese counters, most of which closed overnight, giving cheesemakers a real problem,” he said.

“About a third of our cheese normally goes to food service but we have managed to claw much of that back by increasing our home deliveries and supplying farm shops. Our online sales have been like Christmas and we are also fulfilling orders taken through other shops. Dairies that only supplied the wholesale market have had a much tougher time of it.”

High Weald Dairy, which has been based at Tremains Farm, Horsted Keynes, since 2003, makes both hard and soft cheese, using 60% cows’ milk, 30% sheep’s milk and the rest from goats’ milk. The farm has 300 head of cattle, mostly organi

Meanwhile the Specialist Cheesemakers Association (SCA), the Academy of Cheese and the Guild of Fine Food have joined forces in a bid to help the country’s cheesemakers through the crisis by urging the public to support what it described as a “previously thriving industry”.

The initiative aims to raise awareness of the problems facing the industry and help shoppers connect with local cheesemakers and independent retailers by providing online directories of companies that can deliver or are safely open for business.

It included a British Cheese Weekender event over the Early May Bank Holiday weekend (8-10 May), when people were encouraged to enjoy the country’s best cheeses with a series of free, online tastings.

Tracey Colley, director of the Academy of Cheese explained: “We held a series of virtual masterclasses over the weekend, hosted by top cheese experts, so that people could tune in and learn more about cheese as they tasted along at home. We covered topics from how to be a cheese judge to drinks pairings and storage tips.”

The sponsors of the initiative said cheesemakers were “being forced to pour thousands of litres of milk down the drain and give away cheese for free after many lost up to 90% of their business overnight when the hospitality sector was closed down.

Catherine Mead, chair of the SCA, said: “The future of Britain’s farmhouse and specialist cheesemakers is in the balance – we could see many of the country’s best cheeses lost for ever as family farms and small cheesemaking businesses are pushed to the wall.”

She added: “The good news is that it’s never been easier to buy good cheese, either online or direct. The specialist cheese industry has mobilised almost overnight, often teaming up with other small food producers, to get good food to people in their local areas.”