» Get cows eating to maximise fertility 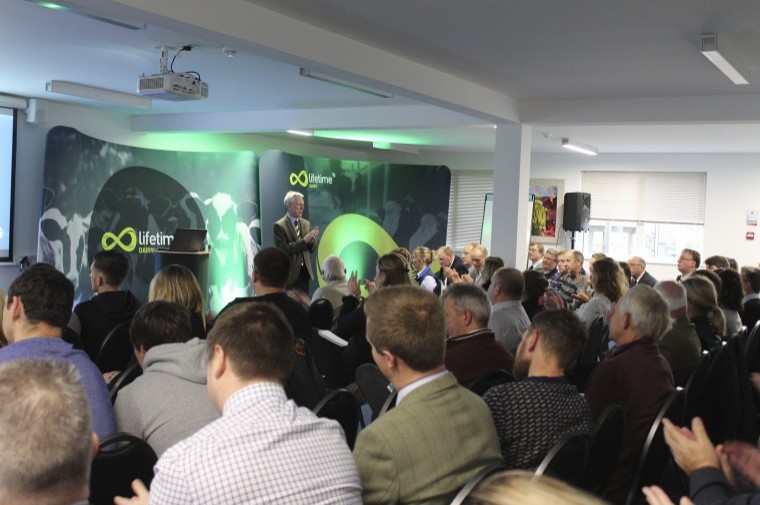 Top speakers from the UK and EU took to the stage to share the latest research surrounding fertility management at the event at the Bath & West Showground, Somerset.

Dr John Cook from World Wide Sires said doing everything to promote dry matter intakes around calving was the key to hitting a target 21 day pregnancy rate of 25-30%.

This was no easy feat considering the “hormonal turmoil” that cows were in at this time, which was working to suppress appetite. However he said attention during this period would pay dividends down the road.

“In these last seven days before calving, if I have a cow that eats 9.5-10kg per day through that period of time, I know I can turn that cow around and by 10 days post calving she’ll be eating 20kg of dry matter,” he explained. “If I can do that with a dairy cow, I will virtually guarantee you I can get that cow back in calf by 100 days in milk and I’ll get a lot of milk from her. If I don’t do that, she’s not getting back in calf by 100 days in milk.”

Although ration makeup was important, he said bigger emphasis should be placed on social environment at calving to promote feed intakes.

Dr Leroy from The University of Antwerp said all farmers should consider the “what, if and when” of feeding to boost intakes around calving and the weeks after and prevent negative energy balance.

For example, “if” there was competition for feed, lack of availability or freshness, then intakes would suffer. “When” a cow ate was also vital. If that cow was eating too much in late lactation, she would go into the dry period over-conditioned, and would be less inclined to eat around calving. This would lead to greater weight loss and poor metabolic health.

Dr Leroy explained that this poor metabolic status around calving would ultimately impact on the quality of the oocyte (egg) the cow produced as the “embryo directly feels what we’re doing to the cow.” For example, a recent study found that the more condition a cow lost three weeks after calving, the worse the embryo quality, 120 days later.

Dr Robin Hawkey, from Mole Valley Farmers emphasised that fertility was what drove the lifetime cycle of the dairy cow. He expanded on Dr Leroy’s presentation that explained how cows naturally partitioned glucose into milk production at the start of lactation which drove insulin down and negatively impacted on the production of the fertility hormones IGF-1 and growth hormone (GH), unless managed carefully. He explained how Mole Valley Farmers’ Precision Nutrition rationing programme had been designed to drive gluconeogenic energy and aid IGF-1 and GH production to help promote fertility.

Arnout Dekker from Phibro Animal Health went on to highlight the potential negative effect that stress could have on herd health and performance. He explained that even on well managed farms, there were stress factors that could reduce cow immunity, such as heat stress, calving or TB testing.

He said, feeding the proven speciality feed supplement, Omnigen-AF could help cows cope better with these stress events. In fact, cows fed Omnigen-AF had been found to have lower incidence of diseases associated with impaired fertility.

Consultant Dr Tom Chamberlain said calving interval was a useful parameter to track on farm and said all dairy farmers should be targeting a calving interval that began with a three, in order to maximise returns. “We should be able to get below 400 days on any herd,” he said.

Using an example of a 450 day calving interval, compared to a 365 day interval, he said although drying off earlier would lose milk in the short term, in the long term, there were big gains to be had by getting her in calf quicker. For example, a cow calving with a 365 day interval would produce 1,755 more litres of milk over her lifetime or £105 more milk a year.

A shorter interval could also bring more income from calves and allow greater selection pressure to be put on cows. Extending the calving interval cost farmers on average about £2.50 a day.