» Robotic packer at the ‘core’ of apple producer’s automation 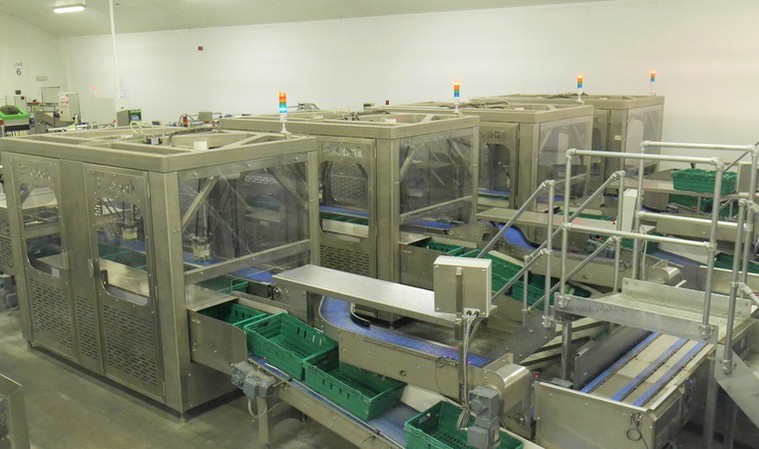 Adrian Scripps’ unwaning commitment to automation has been key to building and maintaining its market-leading position as Tesco’s largest apple supplier. Few apple packing facilities have adopted robotics, as they haven’t found solutions that enable high speed packing without damage to fruit, so instead they elect to stick with manual methods. However, by putting its trust in Brillopak’s pioneering UniPAKer technology, Adrian Scripps has seen a threefold improvement in productivity per person.

“Apples are not an easy fruit to handle because they bruise very easily. This, combined with the need to execute a range of crate patterns, made this project a challenge that couldn’t be met by a mechanical system. Brillopak rose to the challenge,” says James Simpson, Managing Director of Adrian Scripps.

Adrian Scripps is one of the UK’s premier growers and packers of English fruit. Several varieties of apple – Braeburn, Kanzi, Jazz, Opal, Gala, Red Prince and Bramley – along with Conference pears and blackcurrants, are grown on five farms totalling 750 hectares. The family owned farming business is one of Tesco’s key apple suppliers – a relationship that stretches back more than 30 years and has seen much change in the way that fruit is handled at the company’s centralised packing facility on Moat Farm.

In 2018, Adrian Scripps took the decision to invest in two completely new fully automated packing and palletising lines and upgrade the end-of-line kit on two existing lines, following an investment in new flow wrapping equipment. Its existing mechanical layer crate packing systems were limiting output, as they could not keep pace with the flow wrappers.

“Our existing packing system was working flat out at 15 cycles per minute; we soon worked out that we could put apples into the flow wrapper much quicker than this,” recalls James.

The company considered other packing systems, but it was the inherent flexibility of the award-winning UniPAKer robotic crate packing solution that convinced Adrian Scripps to partner Brillopak on this project.

“We looked at mechanical systems where the pack is turned to orientate it, but the flexibility of the UniPAKer won us over – it is infinitely programmable and allows you to make very small adjustments to get the pack to the exact target location,” explains James.

Each of the four UniPAKer crate loading cells at Adrian Scripps houses two delta type robots, each performing a single pick. The benefit of a single pick is that it eliminates the need for accumulation. To maximise packing speed, the crate is dynamically loaded as it is moving; working alongside each other, the robots take it in turn to partially fill the crate, picking individual packs off the infeed conveyor and positioning them deftly and precisely in the crate at the programmed orientation. The robots perform this task with a degree of dexterity and rotation that would not be feasible with a layer-based automated handling system.

Many robotics suppliers shy away from applications involving delicate fruit such as apples, as they bruise very easily. The speeds required to achieve target paybacks cannot be met without unacceptable levels of product damage, rendering some automation projects unfeasible.

“Apples are very delicate products, making them very difficult to pack at high speed. We are the only automation supplier who can successfully pack apples at speeds of 75 ppm, without damaging the product. We have achieved this via innovative end-effector design, combined with our knowledge of motion control and robotics,” explains David Jahn, director at Brillopak.

One of the hotspots for damage is the point at which the pack is released from the end-effector, with some rival robots dropping fruit from heights of 250mm. Brillopak has developed a robot control system that has allowed it to optimise the acceleration/deceleration curve by enabling greater adjustability of parameters.

“When lifting a pack of apples, the robot arm accelerates strongly upwards into a curve, then decelerates down into the crate, so the pack is tightly controlled as it reaches the bottom of the crate.” explains David.

The UniPAKer can run with a variety of end-effectors depending on the product being packed. For apples, a vacuum head ensures gentle handling. Brillopak takes a different approach to vacuum handling than others in the industry, deploying cups with independent vacuum generators for greater control over the picking and placing operation.

A further benefit of the UniPAKer is that it is a standard machine. This means it is proven technology and customers are not paying for the development costs associated with bespoke robotic systems.

The project saw Brillopak install four UniPAKer robotic crate packing systems, four Crate DESTAKers, four vertical accumulation units and three robotic palletisers. Thanks to this investment in automation, Adrian Scripps now has a fully automated crate packing operation that is capable of running at up to 75 ppm, giving the company the capacity uplift it needed.

But the true measure of the success of the project is the threefold increase in per person productivity that Adrian Scripps has experienced.

James concluded: “You can honestly trust Brillopak. A British company, on our doorstep at the forefront of their field. They’re innovative, proactive and delivered everything we asked. We couldn’t have worked with a better partner on this project