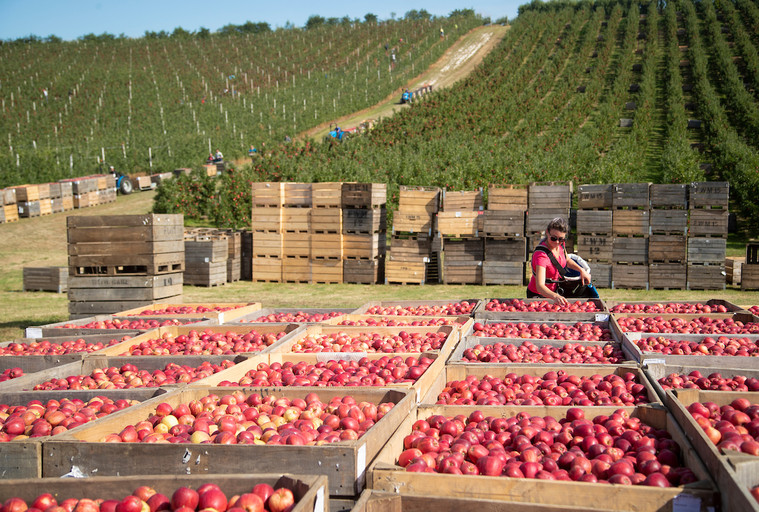 The Great British apple season is here with this year’s harvest now on shelf in the nation’s shops.

Following the ideal blend of warm days and cold nights, British growers claim their apples are the most colourful this century.

“The trigger for a delicious, ripe apple with great colour is the warm days and cool nights that we have had in August and September. It’s a difference of at least 10 degrees between day and night that delivers the vibrant colours that growers hope for and that consumers love,” said Ali Capper, Chief Executive of trade body British Apples & Pears. “The prolonged spells of sunshine coupled with rain throughout the growing season – our wonderful maritime climate – also helped the apples to grow slowly and develop their full flavour potential, meaning they taste better than apples from anywhere else in the world.”

There are so many new British varieties available to buy in the British apple packs in supermarkets as well as more universally known varieties such as Gala, Jazz, Cox, and Braeburn.

Capper adds: “Shoppers not only want British produce, they’re making healthy eating a priority too. Health is high on the agenda like never before and research shows that apples can play a positive role in maintaining gut health and helping to combat diseases such as heart disease and diabetes . At well under 100 calories, there are plenty of reasons to snack on an apple a day. Swap your “snack in a packet” for a fresh, crisp healthy apple every day – it’s more delicious, a source of fibre and saves calories too! With the average snack racking up 183 calories, a simple swap to a British apple, at just 77 calories, could save up to 106 calories each time someone snacks.”

2019 British apple sales will be supported by British Apples & Pears’ ‘An Apple A Day’ promotional campaign, which is focussed on delivering the health benefits of apples and building a recognisable and positive identity for the UK crop.
The campaign will feature in-store activities with multiple retailers, as well as PR, social media, and a strong digital presence. The activity follows the launch of a white paper produced with The Grocer highlighting what the future holds for the industry. “We’re taking a long-term strategic approach to building our Great British Apple brand and are delighted that last year apples regained their position as the nation’s favourite fruit . It has given us much to build on in an upweighted campaign for the rest of 2019 and beyond,” concludes Capper.

Healthy-eating trends, year-round availability and investment in new technologies have helped apple sales to grow by 40% in volume in the last decade. “Right now, just two out of every five fresh apples consumed in the UK are British, but we’re not resting on our laurels. There is still a huge opportunity to encourage people to choose home-grown fruit and our aim is to ensure that by 2030, three out of every five UK supermarket apples are British,” concludes Capper.
– Ends –
For further information please contact the British Apples & Pears press office on 020 7388 7421 or email chloe@rtc.london