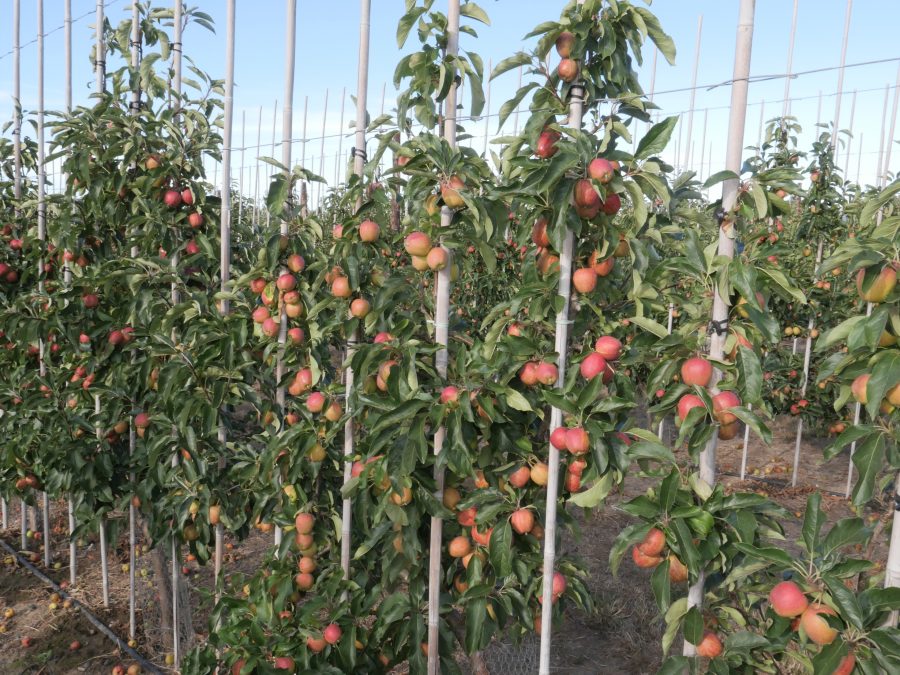 The steady growth of the solar PV industry over the past few decades has been supported by a wealth of technical data and computer programmes that can assess how much sunlight reaches any particular spot on the earth’s surface.

It was, then, only a matter of time before agronomists realised that same information could be used to good effect in fruit growing, another industry that depends on maximising the uptake of light.

“Yield is inextricably linked to the amount of light captured by the tree, which is why we set up our HELIOS trials at Hoaden Court Farm, just outside Canterbury,” explained Hutchinsons agronomist Rob Saunders. “HELIOS stands for Hutchinsons Enhanced Light Interception Orchard Systems and is a ten-year study into the different ways of growing top fruit.”

With light the critical factor, the HELIOS trial includes one batch of trees that has been planted in exactly the orientation that would be used to maximise the amount of light reaching a solar PV ground array.

The Gala Galaxy M9 trees in ‘photovoltaic’ configuration have been planted in an east/west row with the canopy sloping north at an angle of 50 degrees. It looks decidedly odd, but early results show an impressive yield. If replicated commercially, with a target canopy depth of 0.3m, it would allow 3,205 trees to be planted per hectare at 4m row spacing.

There are issues, of course – which is exactly why Hutchinsons is running the trials. “The whole idea of HELIOS is that we make the mistakes and iron out the problems before the growers risk investing in new systems,” Rob explained.

In the case of the ‘photovoltaic’ trials, the
50 degree lean is placing considerable strain on the supporting wires, and despite using a reflective mulch to bounce light back onto the underside of the canopy – as well as suppressing weeds – fruit colour on the ‘wrong’ side is not as good as it might be.

On the positive side, alongside the impressive yield, the unusual angle seems to suppress the tree’s vigour, making it easier to keep under control as it matures.

Nearby there are more leaning Gala Galaxy M9s, although these are planted north/south at a more upright angle – 80 degrees – in pairs that create a V-shape. Planted on a commercial scale, the ‘leaning spindle’ would deliver 7,326 trees per hectare with 3.5m between the rows of paired trees, but Rob’s hope that the increased competition for root space would reduce the vigour has not been borne out. Build up yield, though has proved impressive.

In another part of the HELIOS trial orchard, Rob’s team is growing apple trees in a way that resembles a vineyard layout. The basal stem is laid over at an angle of 15 degrees above the horizontal, with four to five vertical stems then coming off the main stem and bearing fruit.

One of the advantages of this ‘Guyot’, vine-style system is that it allows narrower rows and thus more trees per hectare. At 2.2m between rows, the configuration would allow 3,030 trees per hectare, giving an estimated 12,120 to 15,150 fruit bearing stems.

While the trial still has five years to go, this configuration is so far producing an impressive yield, would allow for simpler pruning and is robot-ready, which has prompted Rob to think about the future of the industry, particularly given the current labour issues.

“This method of growing apple trees is more labour intensive at the start of the season because of the way the stems have to be laid at the correct angle and the vertical shoots trained. It also needs more supports to be provided. At the end of the season, though, harvesting is simpler and could in future be done robotically.

“Perhaps that would help us even out the labour demands across the season. Instead of having a small team establishing and pruning the orchard at the beginning of the season and then a huge team of pickers later in the year, we could move towards having a smaller, consistently sized team doing different jobs throughout the year.”

As Hutchinsons tries to help the industry break through the current yield barrier of 60 t0 70 tonnes per hectare, the rest of the trials site at Hoaden Court Farm is looking at more traditional variables such as different root stocks, alternative support systems and new varieties.

Rob’s team has also been trialling a pollinator called Jester. Not only is it a distinctive colour, which prevents it being picked by mistake, but it produces cold active pollen, which means it works better in cold weathers. “Producing great fruit and a good yield means getting all the factors right, and that’s what this trial orchard is all about,” explained Rob.