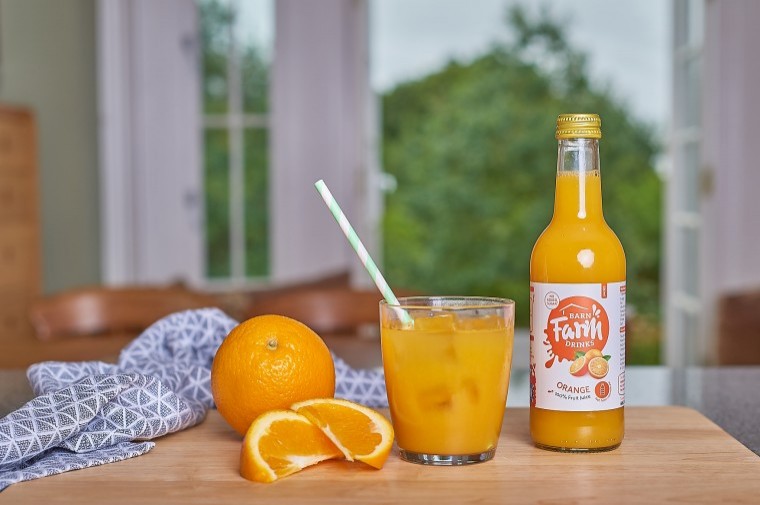 Soft fruit grower D C Williamson has launched a Sicilian Orange juice to complement its existing range of cloudy and clear fruit juice blends, which it produces under the Barn Farm Drinks brand.

The new product, which is 100% pressed fruit juice with no added sugar or colours, has been made with Sicilian oranges and is being added to the Barn Farm Drinks range following demand from trade customers.

Craig Williamson, founder and Managing Director of Barn Farm Drinks and managing director of D C Williamson, said: “We’ve had lots of feedback from pubs that they’d like us to introduce an orange juice to complement the rest of the range, so we have gone ahead and done just this.

“Developing it has been a real adventure for us – we’re experts at creating juices from fruit which we either grow ourselves or source locally, but oranges don’t flourish in the British climate so we had to look overseas. After much research, we found a wonderful supplier in Sicily whose oranges make the most delicious juice. We’re really pleased to be adding a quality orange juice as a permanent addition to the popular Barn Farm Drinks range.”

Unlike many fruit juices, Barn Farm Drinks contains nothing but pressed fruit and count as one of your five a day. The juices are bottled at Barn Farm and wherever possible use fruit which is grown on site too. Barn Farm Drinks also uses state-of-the-art pressing equipment which is normally used to make champagne and sparkling wine, resulting in a fruit juice which is much fresher and lighter where the flavours of the fruit really come through.

As an environmentally conscious producer, Barn Farm Drinks all come in glass bottles rather than plastic and the business has a number of sustainability initiatives on the farm, including an on-site solar farm which provides electricity to 1,400 local homes.

Barn Farm Drinks’ new Orange juice is already available in a number of locations across the region, including Pin Mill Sailing Club and the White Horse at Edwardstone in Suffolk, and the Castle Inn in Colchester. The Barn Farm Drinks range is also available farm shops, pubs, cafes and retail outlets across Essex, Suffolk and Norfolk, including 94 East England Co-op Stores as part of the chain’s ‘Sourced Locally’ range and 24 Chelmsford Star Co-ops under their ‘Only Way is Local’ range.