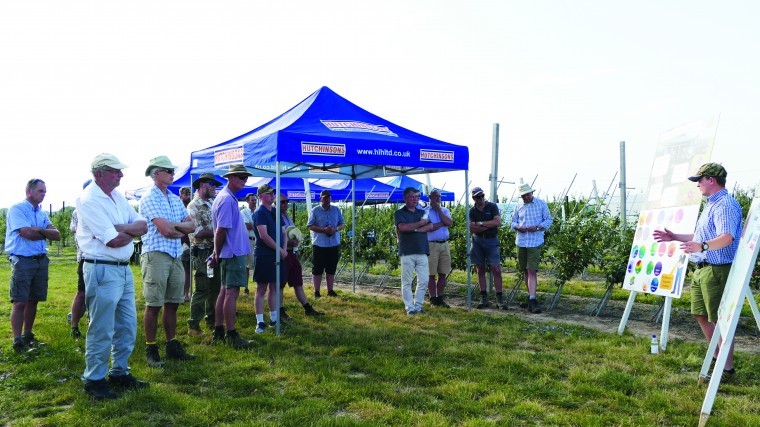 On the hottest day of the year so far, 25 July 2019, top fruit growers and industry professionals gathered at A C Hulme and Sons’ Hoaden Court in Ash, near Canterbury, to listen to specialist agronomists Rob Saunders and Nigel Kitney discuss the progress of Hutchinsons’ Enhanced Light Interception Orchard System (HELIOS) project.

As thunderstorms brewed in the distance, the group was taken around the extensively varied experimental planting systems, which, along with another mirrored trial site in Newent, Gloucestershire, form part of the crop production specialists’ ground-breaking 10-year project in top fruit.

“We are right at the beginning; this is our first open evening and, in many ways, is the very start of a much bigger conversation,” said Rob Saunders. “The planting configurations which we are evaluating in Kent and Gloucestershire have been inspired by work carried out by a researcher in New Zealand. The hypothesis is that the yield of an orchard is intrinsically linked to the amount of sunlight it utilises and that a single-row post and wire orchard, facing north-south will always fail to capture 40% of light which falls on it. Theoretically, with light levels in the UK, I would be happy to see yields reaching a potential of 120 tonnes per hectare.”

The group were talked through each of the planting systems now in place, which are all established with Gala on 3.5-metre rows to fit with the configuration of Tom Hulme’s existing plantations. After looking at the high-density (7,300 trees per ha), V-shaped spur system, Rob showed the group the M26 four stem growing system, which is the project’s ‘problem child’ as it currently lacks even growth, possibly because maiden trees were planted.

The tour then moved on to see some Carolus Magnum trees which were only planted in March 2019. These patented trees have spent an extra year in the nursery and while some suffered during transportation, Nigel Kitney, who is heading up the Gloucestershire trials, was impressed with their overall progress, with a ‘worthwhile harvest’ already expected in year one.

“The initial idea from Carolus was that growers would plant these in the autumn, the tree would establish itself and you could get a decent size crop in the first year,” said Nigel. “But many growers have opted for the normal spring planting so instead they were just aiming to get a normal crop by year two and it was expected that conventional planting would eventually catch up. However, plantations which are currently being monitored elsewhere are showing that even five years on, Magnum trees are out yielding conventional ones by 25%. It will be interesting to see whether we get the same effect.”

Growers’ attention was then focused on the unusual Jester pollinator trees which have been established in the orchard. Pollinators were planted to encourage pips, which are sought after for their flavour enhancing properties as well as the positive effects they have on colour, storage ability and the chemical thinning process.

“The chemicals either put a strain on the tree or they stimulate growth to add stress, so the apples which have more pips will hang while those without will fall off,” said Nigel. “Without pollinators, chemical thinners will give some very strange results. It has also been proven in Italy that higher yields per hectare are found on orchards with pollinators which also tend to give bigger apples and more saleable fruit. A few years ago, at the National Fruit Show, the tastiest apple competition was won by Rubens which had been super pollinated, and I have also seen growers in the Gloucestershire area who have found that pollinators have helped to overcome frost damage.”

After talking about the AHBD’s current research into the effects different rootstocks have on tree susceptibility to canker, there was a discussion about the possible merits of using M116 rootstocks.

“This rootstock confers greater vigour, has strong enough anchorage to support itself and is resistant to phytophthora and woolly aphid as well as being less susceptible to canker,” said Mike Hutchinson. “We have been working with Nick Dunn at Frank P Matthews to investigate the potential of M116 in modern systems as well as the prospect of the nursery developing specific tree styles to match the type of tree produced in the nursery to the requirements of the system for which it will be planted.”

The group then looked at a system which has been designed with robotics, capable of picking from canopies with a fruit wall less than 30cm thick, in mind.

“The robot ready system would ideally be on a row spacing of 2.2-metres, with replaceable vertical elements 30cm apart providing around 12,000 to 15,000 stems per ha,” said Rob. “With that in place, the yield potential should be quite extraordinary. It is interesting to see the system shaped not too dissimilar to grapes and while we have not settled on a name, it is almost identical to single guyot.”

As well as focusing on boosting the ultimate yield of apples by increasing how much light can be intercepted by the orchard, the trial also includes other fascinating concepts, including an intensive low-cost dessert orchard system and several new-to-the-UK varieties including Carolus ABCz nr 37 20, Carolus Asfari, Carolus Belgica, Carolus Elshof Elstar Fortis, Carolus Finesse, Carolus Gala Big Bucks, Carolus Gala Devil, Fengapi, Kitney Gala, and a space for Carolus Sommernachtstraum which will be planted in 2020.

The tour ended on the system Rob believes is pushing the most boundaries. The concept was born from the idea that, being in the business of capturing light, the optimum position would be to have the trees facing east-west and slightly tilted back, which in theory should increase the light captured by the plant by 50%.

“At the moment, I don’t think we are quite there as the trellis is not structurally strong enough to support the trees, but it is a work in progress,” said Rob. “We might also look to put a reflective membrane down under the north side of the trees to improve the light levels on the underside of the apples. It will be very interesting to see where we are up to in a few years’ time and what this has developed into.”

Going forwards, the team at Hutchinsons will be recording the yield from the centre row of each plot which will be shared as soon as results are ready.

“We have embarked on this 10-year long conversation because we see that in the future robotic picking is coming, labour is hard to find and it is getting more expensive and if we were going to look at different tree configurations we thought we could help to learn and iron out the wrinkles so we have a solution of what is possible. Essentially, we are going to make the mistakes so our growers don’t have to,” said Rob.

Attendees were also given an introduction to the Omnia cloud-based mapping software and the new TerraMap service. The high definition soil mapper is capable of recording over 800 data points per ha to calculate all common nutrient properties, pH, soil texture, organic matter, CEC, elevation and plant available water, to help agronomists and growers move forwards in the orchard with precision technology.

“We must extend our thanks to Tom Hulme, who is hosting the trials for us and is proving to be fantastically tolerant and cooperative about what it is we are trying to achieve,” said Mike Hutchinson, as he closed the tour and welcomed visitors to join his team for some well-deserved cold beverages and a BBQ.