We don’t just insure the farming and rural community. We are a part of it - South East Farmer 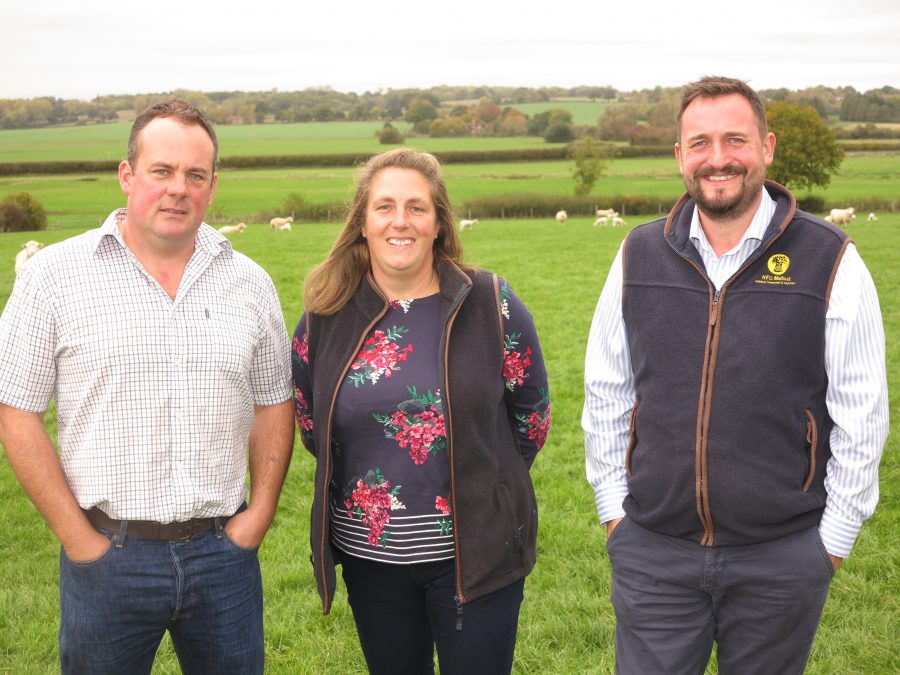 The message, from NFU Mutual Ashford, Tenterden & Whitfield senior partner Doug Jackson, certainly came as a relief to the couple, but it also came as a bit of a surprise, as they had at that early stage not even reported the theft to NFU Mutual.

Doug explained: “I was on our stand at the Romney Marsh Ploughing Match when I heard from a number of farmers about what had happened, and I knew that Ed and Gemma would be devastated at the loss of their sheep and worried about the financial impact on their business.

“It was the weekend, so I popped into the office, checked that the Lovejoys’ policy at Hope Farm covered what had happened and sent a quick message saying that we were sad to hear the news, wishing them well and reassuring them that we were ready and waiting to talk to them about their claim.”

The prompt action, and the fact that the agency contacted the customer rather than waiting to be called, reflects the core message of NFU Mutual Ashford, Tenterden & Whitfield. Its claim – “We don’t just insure the farming and rural community. We are a part of it” – certainly rang true for Ed and Gemma, who farm 700 acres of land in and around Tenterden in Kent.

“We were very relieved to get the text from Doug and it quickly put our mind at rest,” said Ed. “We were sick to the stomach when we realised that the ewes had been stolen, not just because the ewes represented so much time and effort over many generations of breeding our own closed flock, but because we were concerned for their welfare.”

“Knowing that Doug had checked out our policy and that we were covered was immensely reassuring, and our claim was handled professionally and promptly,” added Gemma.

Doug, who has known the family in various contexts for many years, had to check that the farm’s policy regarding theft included the unexplained disappearance of livestock, as no trace was ever found of the 115 Romneys and one cross-bred sheep that were stolen from a field of 460 ewes, all clearly marked with a bright green L.

“We had moved them into one 40-acre field ready for tupping a month or so later, but when we went to get some of the older ewes out for sale a few days later we found that 116 had gone. It seems to have been a professional job and they probably ended up in the food chain,” said Ed.

“You like to think that your insurance company will respond quickly, but getting in touch with us before we had even contacted them was particularly impressive,” he added. Doug’s quick response meant that a claims adjuster was on site within 24 hours and agreed a payment for the missing sheep two days later.

Doug’s local knowledge and understanding of farming meant he was able to focus on getting the claim settled before the next local sheep sale ‘’I knew the  Romney Day sale at Ashford Market was only a few weeks away and I wanted to make sure that if Ed and Gemma wanted to replace the ewes at that sale they would have the cash to do so,” he pointed out.

The couple, who trade as Lovejoy Farm Partnership, run 1,100 ewes in three flocks, cared for by shepherd Will Edmonds, who was said to be “gutted” at the loss. Their pedigree Dorsets are lambing now and the Romneys lamb in March, followed by their commercial Romney crosses a month later.

They also sell hay and straw to the equine market, have a 24-stable livery yard and a small butchery and run a successful caravanning and glamping diversification that benefits from superb views across the fields behind Hope Farm, Wittersham. Most of their land is tenanted and is in four blocks.

The issue of sheep rustling is highlighted in Ready for the Returning Threat, NFU Mutual’s Rural Crime Report 2022.

It points out: “Latest analysis shows that livestock theft cost UK farmers an estimated £2.4m in 2021. Rustling remains one of the costliest thefts to farming, and with the end of Covid-19 lockdowns comes the worry that rustling could rise again. Soaring food prices make rustling a more lucrative crime for criminal gangs and increases the toll each theft has on farmers.”

Doug is the senior of three partners who head up NFU Mutual Ashford, Tenterden & Whitfield, working alongside George Ashby and Darren Smith and supported by a central admin team based at the Invicta Business Centre on the Ashford Market site. Doug and George are also NFU group secretaries, looking after NFU members across Kent and Sussex.

One of the features the agency believes is particularly valuable to its customers is an annual review which allows a member of the team to sit down with larger customers and discuss current insurance needs. It’s something Ed Lovejoy said he found useful.

“It’s really helpful to be able to walk around the farm and look with fresh eyes at what’s valuable, what we need to consider and what perhaps no longer needs to be covered,” he said. “It’s another aspect of the NFU Mutual’s service we value.”

Looking back on the theft and the response from Doug’s team, he added: “We were both very down at the time. Losing livestock isn’t the same as having a quad bike pinched. It was very upsetting, particularly when you think about the amount of work that goes in to a closed flock and the four potential generations lost with each teg.

“The swift, professional response from NFU Mutual Ashford, Tenterden & Whitfield allowed us to start the rebuilding process. They really couldn’t have done any more for us.”