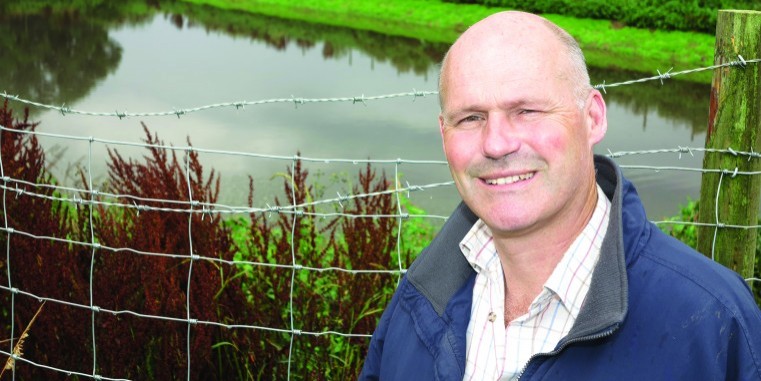 P J Brown, one of the largest hauliers of inert soils in the south, can provide above-ground dirty water/slurry lagoons, build bunds and even raise areas of land affected by flooding – all at no cost to the farmer since the schemes are funded by the revenue generated by the removal of the soil.

It’s not a question of just tipping any old soil on to the site and leaving the landowner to it. P J Brown only delivers properly tested soil and then provides the machinery and the skilled men to create a usable feature from what would otherwise be waste material.

That’s good news for dairy farmers such as Simon Maiklem, who first called P J Brown in three years ago when he needed a new lagoon to comply with the new nitrogen vulnerable zone (NVZ) regulations and has now called the firm back to build a second one.

The second – like the first – hasn’t cost Simon, who manages Mynthurst Farm, Leigh, near Reigate, a penny, and has in fact left him in pocket, as well as doubling the amount of dirty water storage for the run-off from his dairy business.

“We were delighted with the quality of the workmanship three years ago and since we are planning to expand the herd next year I decided to ask P J Brown to build me a second dirty water lagoon alongside the first one,” said Simon.

“The important thing for me was that I didn’t have to worry about planning permission or environmental permits because P J Brown look after that side of things as well as building the lagoon for free,” he said.

Simon was pleased that the scale of the company meant his new lagoon could be finished quickly. With eight lorries running into the site, it meant that disruption to neighbours was minimal, he said. Bob Penticost, manager at P J Brown, oversees each job and makes sure that drivers are aware of farm issues such as livestock and other vehicle movements.

“It’s all about communication and we work hard to make sure that we fit in with the farm and its priorities,” he said. “Because we only use our own drivers and our own fleet of lorries that is a pretty straightforward operation.” Each of the lagoons at Mynthurst Farm holds up to 10m litres of dirty water that is spread on the fields in the summer to reuse the nutrients.

Surveyor Nick Page mapped out the site and came up with the best location for each of the lagoons before creating the drawings, obtaining the permits and sorting out planning permission. “I just got on with the day job,” added Simon.
Mynthurst Farm is made up of 550 acres of farmland plus a further 200 acres of woodland. Simon grows winter wheat and maize as well as keeping 280 Holstein Friesians on the land, a figure that he is hoping to increase to 350 next year.
The milk is sold through Arla to a large supermarket, which Simon praised for honouring prices set to farmers earlier in the year despite the current over-supply and low prices on supermarket shelves.

Simon also took advantage of the P J Brown offer at another of his businesses, Dean Farm, Salfords, where he asked them to fill an old slurry lagoon he no longer needed in order to turn it back into farmland and was delighted with the result.
The benefit for farmers of using P J Brown is that the company, which has been in the business for the past 30 years, only uses its own trucks and provides a cradle-to-grave environmental paper trail.

“It means farmers can be completely confident that we are only bringing inert materials on to their land and they also know that we have the right machines and skilled operators available to create the scheme,” added Bob.
Neil Harrison, a partner in the family-run Pallinghurst Farm at Rudgwick, has built up such a good relationship with the team at P J Brown that he has not used any other contractor for similar jobs over the past 20 years.
The family business farms a total of 2,000 acres and has used P J Brown for a range of projects including a 20,000 cubic metre dirty water lagoon, reservoirs, ravine filling and roadways.

“All the men who come on to the farm are good operators who know what they are doing and they do a great job, usually at no cost to us,” said Neil. “I would certainly recommend the company to anyone needing a supply of inert material for whatever project.”

P J Brown also supplies inert material to equestrian farms, for roadside bunds and for golf courses. With a large fleet of lorries hauling material off building sites every day, there is no shortage of material and plenty of uses it can be put to. It takes a two-man transport team to organise the logistics for the company’s tippers, grab trucks and roll-on-off bin lorries.

“Whether it’s for noise attenuation, to help farmers meet NVZ regulations, to raise the soil level on an area of flood plain or for golf course features, we can deliver the right material and put it in the right place, often without charging the land owner a penny,” Bob concluded.