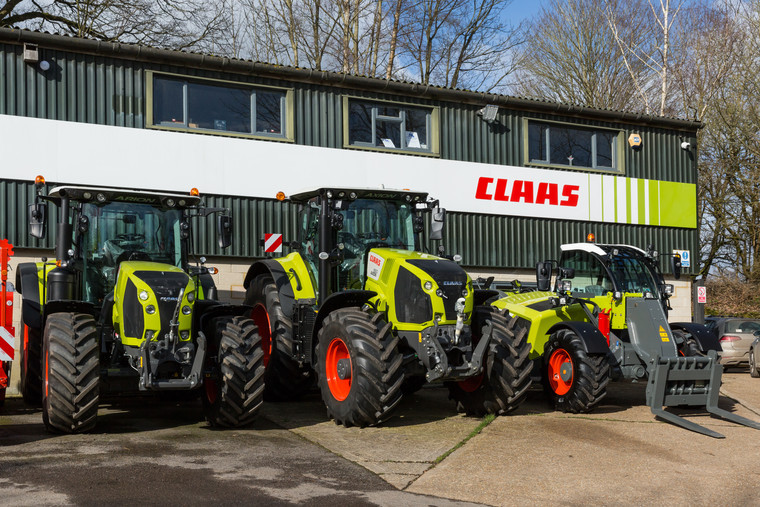 Diversification is by no means a new concept for farmers, who have been converting barns to business units, installing solar PV systems and creating farm trails and petting zoos for decades.

The idea has perhaps been less well developed among machinery dealers, but as the new Olivers depot at Petworth proves, broadening the range of products on offer can provide a two-fold boost to sales, attracting a swathe of new customers while giving existing clients a wider choice.

Formerly Claas Southern, the Pulborough Road dealership has always enjoyed a good reputation among those looking for high end combine harvesters and foragers, while also offering the impressive Abbey Machinery tanker range and Horsch tillage equipment. While that combination gave it a strong but limited line up of products, the business recognised that in order to grow it needed to increase its customer base further.

Now, under the ownership of Oliver Agriculture Ltd, which bought out the Claas Southern dealerships in both Winchester and Petworth in October 2018, the thriving business has much more to offer farmers in the south.

“We now supply machinery and parts for a further 12 new franchises, all of them tried and trusted names that our customers can rely on,” explained sales director Russell Hallam.

“In the past, unless a farmer was looking to buy or service a Claas combine or forager, it was unlikely that he would give the old business a second glance,” said Russell. “Now, though, we have built a whole new customer base by offering a larger range of premium franchises. Meanwhile our original Claas customers are enjoying the fact that their dealer of choice also offers many more products.”

The result has been a steady increase in business and has been good news for the local economy, with an extra three jobs created at Petworth over the last financial year.

The new products on offer include those from Bunning, KRM, Opico and Maschio as well as, Cherry Products, Grange Machinery, Samson, Spread-a-Bale, Tanco, and Richard Western, all chosen for their quality, reliability and effectiveness and all fully supported by the Olivers parts and servicing departments.

Olivers was established in Bedfordshire in 1823 by steam ploughing and threshing contractor James Oliver. His grandson, Archibald Thomas, gave his initials to the business, which became A T Oliver & Sons. The business became the first UK-appointed Claas dealership in 1947.

The Petworth site had been an independent machinery depot for many years before becoming part of Southern Harvesters.

Russell joined Southern Harvesters in 2002, and after a period as regional sales manager for Claas UK, he returned to the retail side of the business in 2013. He became director of Claas Southern in 2015, and when Olivers acquired the business and all its staff, Russell was appointed as Sales Director for the company’s southern area in October 2018.

The Petworth sales team is headed up by Gavin Elliott and Aaron Dadswell and supported by two full time sales demonstrators. With Olivers keen to support local apprenticeships, the company has recently taken on parts apprentice Elliott Matthews, who has joined the two existing apprentices in the service team.

Sadly, government advice around the coronavirus outbreak saw the postponement of an open day and grain clinic planned for the Petworth branch last month. It meant farmers were unable to take advantage of a moisture meter recalibration service due to be offered by Martin Lishman, one of the new suppliers that have boosted the range of services on offer.

Olivers will, however, be offering a drop-off service and will work in collaboration with Martin Lishman to allow customers to have their moisture meters checked and certificated for grain assurance schemes. Customers should contact Parts Manager Craig McColl on 01798 343660 for more details and to arrange this service.

“Grain clinics have proved very popular at other Olivers events and it was very disappointing that we were unable to go ahead with this one” said Russell. “We hope, though, that farmers who had been planning to attend the open day will take the opportunity to drop in and talk to the team here at some other time. We are always happy to see customers old and new and chat about new machinery and equipment that can make life easier or more profitable and we plan to reschedule the open day and grain clinic at a later date.”

Olivers’ servicing offer has been boosted by the completion of a new service bay that has replaced what was an old wooden store and taken the dealership from three bays to four, reflecting a growing demand for servicing from local farmers. The new bay is ideal for servicing tractors, while the conversion has also increased the business’ parts stock capacity.

“We have seen increased business activity in all departments, and the fourth service bay will add to our capacity,” explained Russell. As well as tractors and other machinery, Olivers at Petworth looks after an estimated 40 combine harvesters and 20 foragers locally throughout the year.

Service manager Jeremy Uren coordinates the branch’s seven mobile service engineers, who can be on farm to deal with a problem machine within hours. Jeremy is supported by service foreman Rob Booker to help manage machines on service contracts.

All of the engineers operate fully equipped service vans and are manufacturer trained to diagnose and rectify faults quickly and efficiently to maximise customer’s productivity, which is particularly vital during harvest.

Olivers can provide backup machines, including foragers, from within the group to keep customers productive during the busiest time, from the green harvest to golden harvest.

Parts supply is crucial during harvest. “As well as being able to order parts in quickly, we make sure that we keep a huge stock of all fast-moving spares like bearings, belts and blades,” explained parts manager Craig McColl.

“Our goal is always to keep our farmers up and running and operating to maximum efficiency. In the event a part is not immediately available, Claas offer a 24-hour turnaround all year if ordered before 3pm.”

Olivers can also support farmers by moving stock internally between its five branches at Luton, Reading, Tingewick, Petworth, and Winchester.

Craig said the broader range of products on offer at Petworth had resulted in considerable growth for the store. “We have increased revenue from our existing customer base and attracted more customers by offering a wider range of products including new merchandise from Martin Lishman, Jack Pyke, Buckler boots and Granit Parts.

“Horsch sales have been particularly strong, essentially because of the quality of the product. Horsch drills are as popular as ever, with the well-proven Sprinter tine drill coping very well on flint and stone and proving to be versatile in many conditions.
“The Avatar single disc drill is an excellent choice for the farmer looking at a no-till system, while the Pronto cultivator disc drill can be used in a more conventional system, or equally used as a no-till disc drill without the front cultivation discs.”

Craig said other new franchises that were performing strongly included Bunning, which offers a comprehensive range of rear discharge manure spreaders, and Spearhead professional hedge trimmers and flex-wing toppers, with their focus on build quality and performance.

With large livestock units and anaerobic digestion plants popular in this part of the South East, Olivers has also seen strong demand for Samson professional slurry tankers, which Craig described as the perfect machines for applying slurry and digestate.
While the raft of new franchises has made a big difference to the dealership’s performance, Claas remains Oliver’s number one brand and is responsible for 75% of the turnover generated by the Petworth outlet.

As well as the unmistakeable lime green combine harvesters and foragers for which the prestige brand is perhaps best known, Claas offers a full range of tractors that runs from 70hp to an impressive 530hp and can tackle everything from vineyard duties to the most challenging of agricultural tasks.

Claas is the European market leader in both combines and forage harvesters, with the Claas Jaguar being the leading forager worldwide.

Interestingly, the ‘Jaguar’ name is one it shares with just two other products. Since copyrighting the name in the 1930s, the car manufacturer has allowed its use by both the fighter aircraft of the same name and also by the Claas forager, as noted by a letter of authorisation proudly displayed at the Claas factory. Sadly, while permission was given to use the name, the pouncing jaguar symbol is reserved to the luxury car marque.

While the Claas Lexion sets the standards in high performance combines, the Jaguar range runs from a 408hp entry level machine through to the 925hp model designed with more intensive contractor usage in mind. In the Petworth area the sales of combines and foragers are fairly evenly split.

Russell pointed to a “very challenging” start to the year, not least because the weather has significantly affected the planned autumn sowing campaign, but said that Olivers had nonetheless “enjoyed a good start to the financial year, with equipment sales remaining buoyant”.

He added: “We continue to invest heavily in training to allow us to deliver a first class sales, after-sales, parts and service offering. We are proud of the way we have built up our customer base and developed strong retail sectors across so many new product ranges.

“We work hard to make sure we look after our customers and their machinery, which means not just making sure they buy the right product but helping them get the best from it, supplying the parts they need and servicing it efficiently.

“Agriculture is a tough environment and so we aim to sell quality products at a competitive price and then provide great after-care service. Whatever the product – from a 100hp tractor to a 100 tonne per hour Claas combine – we are committed to providing the support that farmers need and deserve, and we invest in our staff to allow them to deliver it.”

<a href=”https://issuu.com/kelseygroup/docs/sef04apr20_issuu/33>Click here to read the full feature on Olivers