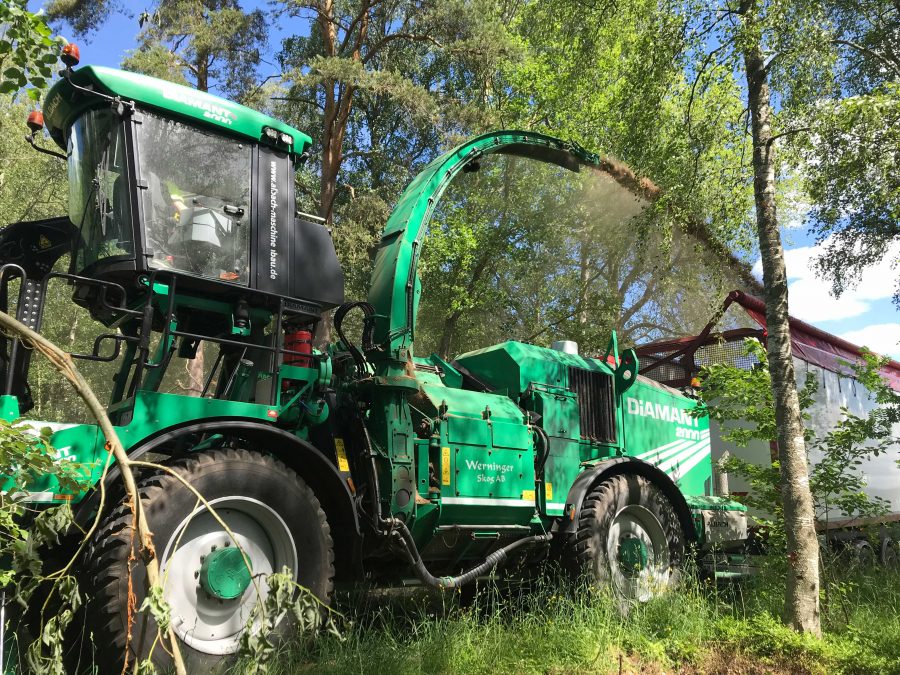 When Richard and Lorraine Curteis decided that a pre-owned Albach Diamant 2000 whole tree chipper was just what their forestry business customers needed, they were determined not to be put off by the fact that the 700hp machine they wanted to buy just happened to be in Sweden.

The couple, accompanied by their daughter, set off on the ultimate road trip to drive the self-propelled monster all the way back to the Curteis Forestry yard at Boughton Monchelsea, near Maidstone in Kent.

“We have always been committed to providing the best possible service to our customers and that means having the right machinery to do the job, so we drove over to Sweden, bought the machine and drove it home,” explained Richard. “I did have some practice, though – I drove it out of its compound and took it up the road and back for a quick test run before agreeing to the deal.”

It may have meant a 750-mile journey at a maximum speed of 50mph at the wheel of a huge machine, but the Albach has proved its worth as the ultimate self-propelled whole tree chipper.

Capable of taking truly impressive sized trees into its jaws, the mighty machine can chip 500 tonnes a day and is an important part of the range of equipment that Curteis Forestry has in its armoury.

The company supplies woodchip to the Kent Renewable Energy Plant at Sandwich and is keen to talk to farmers and landowners with trees that need clearing, thinning or cutting back. Richard and his team – chipper driver Josh Sparrowhawk and loader Paul Whibley – have recently been busy taking previously unmanaged orchard windbreaks back to a manageable size.

With a focus on customer service, many years’ experience and the right equipment in house, the company prides itself on tackling difficult forestry challenges and tree clearance in the commercial sector.

“We are experienced at taking out roadside trees that may be a health and safety hazard, perhaps because of Ash Dieback, as well as managing overgrown woodlands and cutting back field margins to provide the necessary clearance for combines,” explained Richard.

Delivering value for money has always been important to the family business, and since Curteis Forestry has an outlet for woodchip, larger areas of unwanted trees can be removed at little or no cost to the farmer or landowner. Richard’s team will also hire the chipper – and an operator – to farmers who have thinned their own trees but have piles of logs or brash they need cleared.

The Diamant 2000 can chip wood into lower grade 100mm chips for power plants such as the one at Sandwich or finer G50/G30 chips for smaller, domestic scale biomass boilers.

Alongside the chipper, Curteis Forestry operates a 26-tonne Liebherr 916 excavator fitted with a Westtech CS780 tree saw, and a WF-Trac 1700 specialist forestry tractor.

Richard has worked with trees since he left school, having been taken on by Bearsted forester John Mortimer in 1986, a year before the great storm hit the South East. “My parents had run a similar concern, but they were winding it down by then and they thought I should make my own way in life anyway,” Richard recalled.

After learning the ropes with John and seeing lots of changes in forestry, not least the decline in the need for pit props as the Kent coalfields wound down, Richard diversified into arboriculture, working as a tree surgeon and setting up Aspen Tree Services in 1992.

While that business continues to thrive, Richard’s first love has always been forestry, which is why he and Lorraine, who looks after the admin side of both businesses, set up Curteis Forestry.

“I love working with trees and it’s all I’ve ever known,” Richard explained. “I pride myself on delivering a bespoke, personal service and on working with the farmer or landowner to achieve the best possible result. I also like to be hands-on, which is why I’m always out there with the team, not sat in the office!”