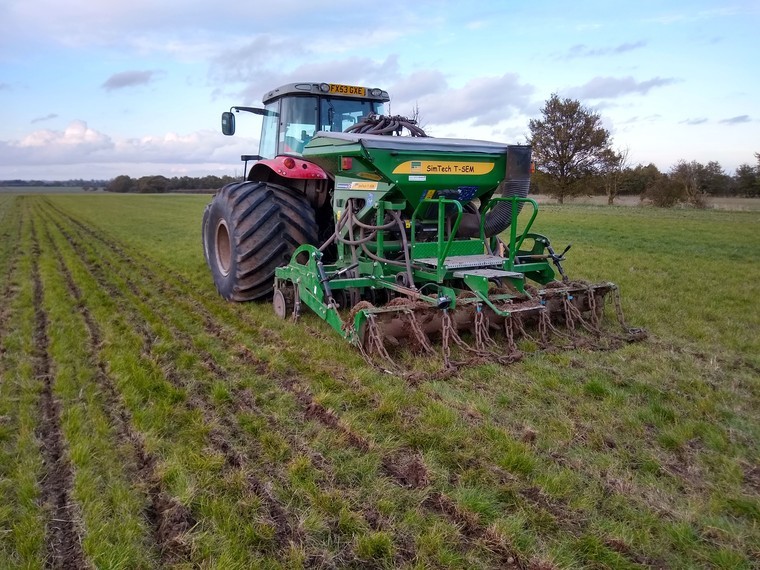 For over twenty years, Simon Cowell has worked his heavy clay loam on Motts Farm at St Lawrence, near Southminster on the Dengie Peninsula between the Blackwater and Crouch estuaries in Essex by using methods which are very different to the arable operations carried out by other arable farmers in the region. Simon says that his 400 acre farm has a heavy clay loam which is high in magnesium, making it sticky in moist conditions and baked hard when it is dry. The first thing he did was to stop ploughing, for “otherwise I was trying to deal with a sticky mess or unable to get into the ground.“ He also said: “With conventional methods there was no way I could contemplate spring crops, so I had a very short rotation of a rape and two wheats.”

Motts Farm was purchased originally by Simon’s grandfather in the 1950’s and was a dairy operation for thirty-five years. They expanded by buying the next-door farm. Simon still has some grassland which is used for grazing and hay. Some of the heavy land is actually below sea level but has not been flooded for many years. When Simon originally stopped ploughing, he did continue disc cultivation and also a certain amount of sub-soiling but soon realised that incorporating straw into the top few inches of soil was counter-productive. He commented: “the newly sown seeds didn’t like it and the buried straw consumes the valuable nitrogen.” He discovered that by leaving the straw on the surface this encouraged worm activity, it acted as a mulch and by not cultivating he found it easier to deal with the problem weeds. He finds that black grass “is not a major problem”.

As the combine did not really spread the straw evenly enough across the land, Simon developed and manufactured himself an ingeniously modified straw rake with 72 tines on a width of 6 metres. This very light operation can be done very quickly to spread the straw and Simon makes two passes diagonally across the fields – the first immediately after the combine and then the second about a fortnight later on the opposite diagonal. These two operations have the added benefit of disturbing slug activity. There are times when the straw can be too thick and thus some of it needs to be baled but normally it is spread across the fields. As other farmers have discovered, to direct drill into heavy soil with straw on the top is not easy. There are difficulties such as, straw blocking the machine or actually leaving seed in direct contact with the weeds. Simon’s Unidrill disc drill did have some problems but during a visit to the LAMMA Show, he came across the 3 metre SimTech T-Sem with the Aitchison boot mounted on its spring tines. Simon has found this drill to be very successful, even performing well when conditions are really sticky and he is getting the same yields as in the past but at a far lower cost.
A low dose of glyphosate is applied just prior to drilling but he no longer uses any phosphate and potash fertiliser or seed dressings and has removed all growth regulators from his system. He does use a QLF liquid carbon-based fertiliser and is using less fungicides as the soil health on the farm has improved markedly over the years.

A great help with this is the compost that Simon makes himself. To produce this, he uses manure from his own stables plus waste from two nearby riding schools and livery yards as well as wood chippings from tree surgeons and grass cuttings from a ground maintenance company.

The vehicles bringing the waste tip it for him in a straight line along the ground and then he winnows this with a tractor driven 4 metre wide Richard Western windrow turner which he was very fortunate to find in the second hand machinery market. The rows need a bit of tidying up beforehand with a loader so that the turner can operate exactly at its 4 metre width. If the compost is a bit dry, Simon leaves it over the winter (certainly not a problem in the recent winter!) and starts the composting in the spring. He said that the manure from horses bedded down on straw makes the best compost as it always seems to hold enough urine for moisture and has the right C:N ratio. He adds some gypsum to the compost and it is thus applied biologically. Apparently, composting experts recommend adding clay to the mixture to create more “body” but Simon finds that an addition of some topsoil from some nearby marshland is “just the job”.

The windrow turner works the compost hard to get a really good mixture but this is not very helpful to fungi and the larger soil life, so to help the compost produce the maximum diversity, it needs to be left for a year before application. This of course does help the aerobic maturity so that life forms can multiply. It is crucial that the temperature of the material does not go over 70 degrees so the material needs regular monitoring and turning again when it reaches 65 degrees. All this can take several days and windrowing operations by which time the material has stabilised.

As Simon cannot make enough compost to cover the whole farm in one go, he works on a four year rotation, applied at about 4 tonnes per acre. He has tried 2.5 tonnes per acre on one field and that is not an easy task with a large 10 tonne spreader but as the no-till land is as flat as a billiard table and with no ruts the machine can travel swiftly.

The use of some cover crops is also helpful to the condition of the soil at Motts Farm and although Simon does not practice controlled traffic farming as such, he ensures that grain trailers and the JCB Fastrac do not go on the main parts of the field but operate only in the tramlines on the headlands. His Massey-Ferguson tractor and the Case combine are fitted with Terra tyres and the light weight of the SimTech drill helps as well. The weight of machinery and equipment is very important to Simon and he has always kept his eye on this aspect as well as buying good quality lightly used machines. He bought his Case combine from another part of East Anglia and then discovered by chance that its serial number was only one digit from that owned by his neighbour! They can help each other with spare parts.

Nowadays, the farm grows winter wheat, oats and beans, spring beans, peas and linseed. It was impossible to grow the last two crops prior to the “revolution” in Simon’s farming methods. Yields are very much “on the up” as is the control of weeds and pests without huge usage of chemicals. He has stopped growing OSR because of the chemical input required and the effect on soil life.

During a recent visit, and during the period of really heavy rain, it was a delightful and impressive surprise when examining samples the Essex clay soil to find that it was very friable and sweet smelling – not solid lumps of densely structured sour material that would be expected in the conditions and during the winter. There was always a high worm count in the samples examined and apparently the soil organic matter is usually 5-6%. Simon Cowell said that the most important piece of equipment on his farm is his spade as it enables him to keep a regular check on what is happening in this key part of his farming operation. Regular inspection and monitoring of the soil for soil mycorrhizae and plant tissue nutrient levels shows that his well-made compost encourages the soil biological activity. Simon urges other farmers to look at no-till and direct-drilling on their land and said: ”No-till is interesting and more profitable – not long hours in the tractor on all the old-style operations”.