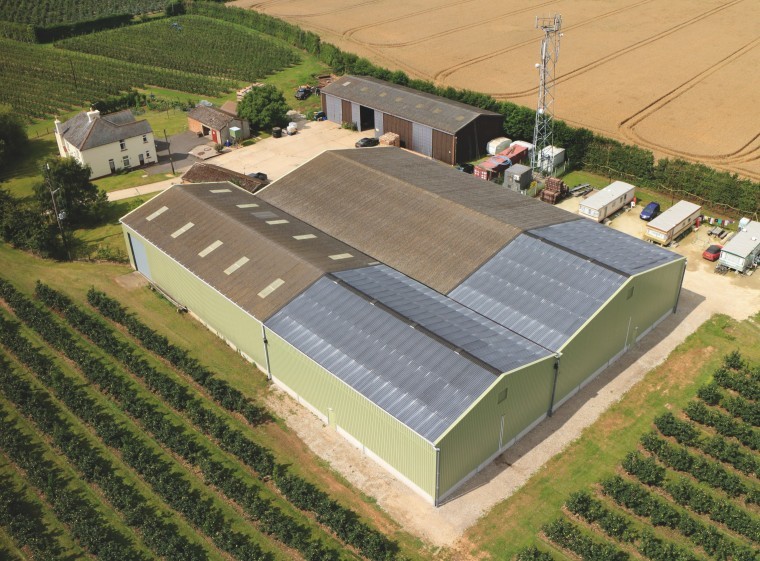 With orchard planting rapidly outstripping the rate at which cold stores are being built and the quality of much of the storage available for rental dropping, it is hardly surprising that growers are making sizeable investments.

On farm developments have seen 44 controlled atmosphere (CA) stores built or refurbished in the UK in the 2013/14 season (these will hold 22,800 bins or 7,542 tonnes of fruit) compared to 96 stores in the 2012/13 year. These new stores represent nine per cent of the UK current storage requirement for crop estimates in 2014. The gap between production and storage capability seems ever widening and growers are under pressure to source or build appropriate storage in order to guarantee the quality of their fruit.

Tom Hulme of AC Hulme has made one such substantial investment in six CA and four air stores at Hoaden Court Farm of Ware near Sandwich in Kent, enabling the company to store their whole production on site. A big consideration for the planners was the removal of the lorry journeys taking fruit to the EKS facility and then returning it for packing. “It was a real turning point in the application process,” said Mr Hulme. “Once Dover council planners realised that this unit would remove lorries and therefore large amounts of carbon the application was well supported and they could not have been more helpful.” The project is anticipated to have a pay back period of around 10 years, slightly longer than most investments for the business but one that is essential for the future control of costs and to ensure responsiveness to customers.

There is a larger than average requirement for air storage at Hoaden as the Hulme enterprise grows a lot of early season varieties such as Discovery, Zonga and Robijn.

The teams at ICA Ltd and STS Refrigeration worked with Mr Hulme and the planners to design the large, 4,000 bin capacity air stores which open on to a new yard area with CA stores accessed via a broad, chilled corridor which will be essential for the removal of field heat this autumn.

ICA built the air stores so that they are suitable for conversion to CA rooms if and when needed in the future. They did this by gas sealing the areas which would be inaccessible once the equipment was installed and providing doors which would only require a conversion kit to make the stores air tight. “This keeps options open should Tom require more CA rooms in the future as well as making it cheaper to convert by making them ready now,” said Andrew Wills of ICA.
As the fruit is due early this year, ICA and STS had to structure their build plan to accommodate an early harvest. For this, ICA constructed the ceiling first enabling STS and other trades to start work sooner installing equipment above while ICA carried on building the stores underneath.

STS have installed two new refrigeration systems to the new storage complex: each has a cooling capacity of 230 kilowatts using R134A. The systems are fitted with the latest electronic expansion valves and hot gas defrost system and cycle mode.
Fitted to the systems is a complex refrigerant gas leak detection system made by CPC which uses sniffers in the control panel to sample the zoned areas of the system. Under the FGas regulations this is a mandatory requirement which came in 2006. The current situation with the use of F gasses is still under review and the regulation will be amended very soon with stringent changes due to become law. There is a plan that a substantial bin store at one end of the building will become an additional 2,000 bins of storage in a couple of years time. This will ensure that the site will be able to hold all of the production from new orchards as they mature: the management system for the stores has the capacity required to run these already.

The project has not been without considerable challenges – earth works began in November and weather conditions caused problems. The storage facility has been dug down by a few feet to drop the profile of the large new building in line with the existing roofs. There is a phase two for the yard planned which will include the laying of a new surface and reorganising the other storage barns.

Power has been a challenge. As with many farm projects, there was insufficient power from the pylon 500 metres away. There is another one three miles away but the trenching would have been across another landowner’s ground so it was very time consuming to negotiate a way leave. In the end, Mr Hulme has had to contribute 40% of the total cost of updating the Wingham network, a substantial additional cost to the project.

He is full of praise for the teams at ICA and STS, however. “The teams are very experienced with all the issues around these installations. They were excellent and have done a really good job to get everything finished in time for the new season.” The final challenge is UK Power need to install a meter, something which should arrive before the end of August to enable commissioning in time for the main pick of fruit.

Simon Bray has also been investing in an extension to his 10 year old facility at Monks Farm, Sittingbourne, Kent. His 100 acres of fruit has seen a dramatic change in the last decade moving from predominantly Cox to a modern mix of Gala, Jazz, Jonagold (under contract) with just 20% Cox and 20% Bramley. His business, like many top fruit growers, now is focussed on extending the season and with that in mind he commissioned five CA stores from Andrew Wills of ICA and STS in 2013, with a total capacity of just over 1,700 bins of fruit.