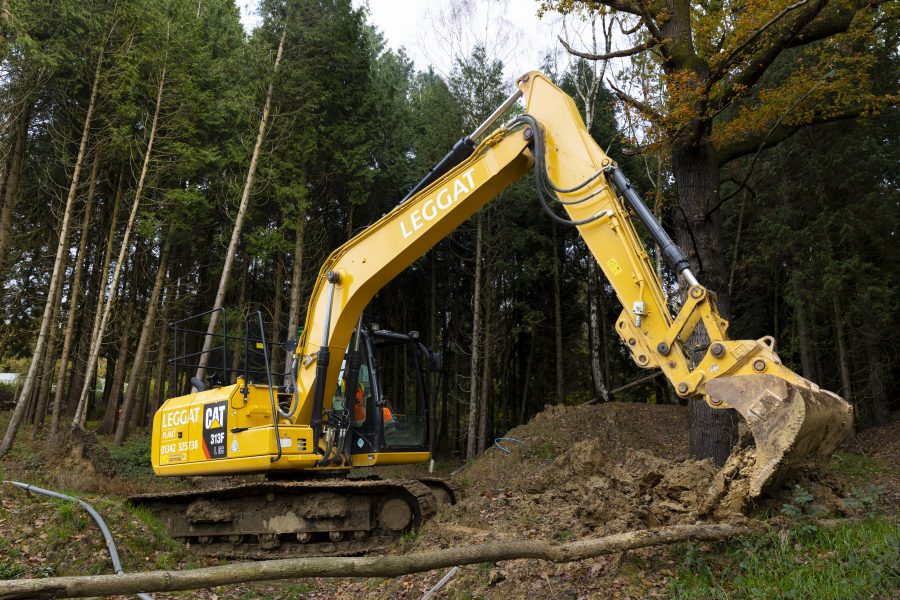 A decade or so after helping to mow the grass and clear the leaves during a week away from his studies at school, Connor Leggat found himself back at the same site carrying out a range of projects for the new owners.

But while he wasn’t back as a gardener, the site has nonetheless played a large part in the growth of his rapidly expanding groundworks, civil engineering and construction company, Leggat Plant & Civils Ltd.

While helping a schoolfriend’s father with gardening duties, Connor clearly made an impression on him, and when, years later, the new owners said they were looking for someone to clear some tracks through woodland, the gardener recommended his short-lived apprentice.

“He had noticed the Leggat Plant signage on some of my vehicles locally and suggested that I might be able to help,” Connor explained. “We created the tracks and were then asked to clear the site of the old house before going on to carry out some pretty large groundworks and earthworks projects.”

As the work became more technical, the Leggat Plant team continued to rise to the challenge and were asked to take on more projects. In one which highlighted the flexibility and variety of skills possessed by the team, Connor was asked to rebuild a large and imposing greenhouse after the remains of the building were discovered in the grounds.

Connor has since become good friends with the estate’s new owners, something that has become a recurring thread throughout his career to date. “Our goal is to work with farmers and landowners to help them achieve their dreams, and when you work that closely with clients they often become friends over the course of the project,” he said.

“We have a passion for what we do. What makes us get up in the morning is knowing that we are helping farmers and landowners get their businesses into great shape for future generations.”

One of the farmers benefiting from that ambition is setting out to create a sustainable dairy business in Lingfield, helped by the Leggat Plant team.

The company built a new, larger, external silage clamp at the site before removing the old internal clamp to make space for a new and more efficient cattle handling system.

“We enjoy seeing farmers and landowners growing into the buildings we construct for them and making the most of the opportunities we help deliver.” Connor explained.

It is a philosophy that can make recruitment a challenge for the East Grinstead based company. “We have to work hard to find the right people to join such a close-knit, passionate team,” said Connor. “We know when we’ve found them, though, and we value their contribution to our ambitious plans.”

The current 14-strong team includes an efficient back-office team that ensures the team leaders and operators are fully prepared for whatever the day holds in store.

As well as groundworks, land drainage and general construction work, Leggat Plant supplies and lays tarmac using its paver, lays concrete slabs and erects steel-framed buildings. “We see ourselves as working with customers rather than for them,” Connor added, “and while the company expands, the farming community will always be an important and valued part of our business.”

Leggat Plant also works with renewable energy companies installing ground source heat pumps, and has been working at a National Trust property in Dorset to deliver the charity’s biggest renewables project to date.

As well as carrying out the groundworks, Leggat Plant built the plant room for the heat pump, jumping through understandable architectural hoops to make sure it was in keeping with the historic building, a project that involved sourcing bricks and slate tiles from North Wales.

The company also suggested the use of a liquid rubber treatment instead of lead for the roof, seamlessly blending traditional design with modern technology in a move that impressed the National Trust.

The Leggat name is well known in the East Grinstead area. Connor’s grandfather Alex was born at Mill Place Farm in the 1900s, running a dairy and later a beef herd, supported by Connor’s father Chris. The land was rented from the Forestry Commission, and when it decided to sell it in 1999, a year short of the centenary, the family left farming.

After two years he began working for a dealership, a move that convinced him he needed to work for himself. “The most important thing I learned from that experience was how not to manage people,” he commented. “It inspired the somewhat different philosophy that underpins Leggat Plant.”

It was a fellow rugby player who kicked off the business after suggesting Connor should buy himself a digger so that he could help with his landscaping business. It soon took off. “Within a short space of time I was doing groundworks for local building companies,” he recalled.

Rugby is important to the company, with many of the team playing or coaching a range of age groups and team sponsorship forms part of its local community support. The company is also a great supporter of the East Grinstead and Three Counties Ploughing Match, with Connor its chief steward and his father Chris the treasurer.

His big break came when he was walking close to his former family home at Mill Place Farm in 2018 – “just keeping an eye on the place” – when he bumped into an associate of the new owner, who informed him that they were looking for a groundworks company to help re-sculpt some of the site to create what is now Kingscote Vineyard.

That particular project involved sub-soiling 100 acres of sandstone at five metre intervals using a metre long ripper leg attached to his Caterpillar bulldozer.  Although the technical spec said it shouldn’t have been capable of doing it, Connor bought the ripper and set about installing it to the bulldozer.

Leggat Plant’s “breakthrough” project at the vineyard was also the site of the company’s first steel-framed building, a 25m x 15m machinery store.

Still only 29, Connor’s success to date bodes well for Leggat Plant’s future. It looks certain that Mill Place was just the start of a long and prosperous journey for a business that seeks the same level of success for its clients.