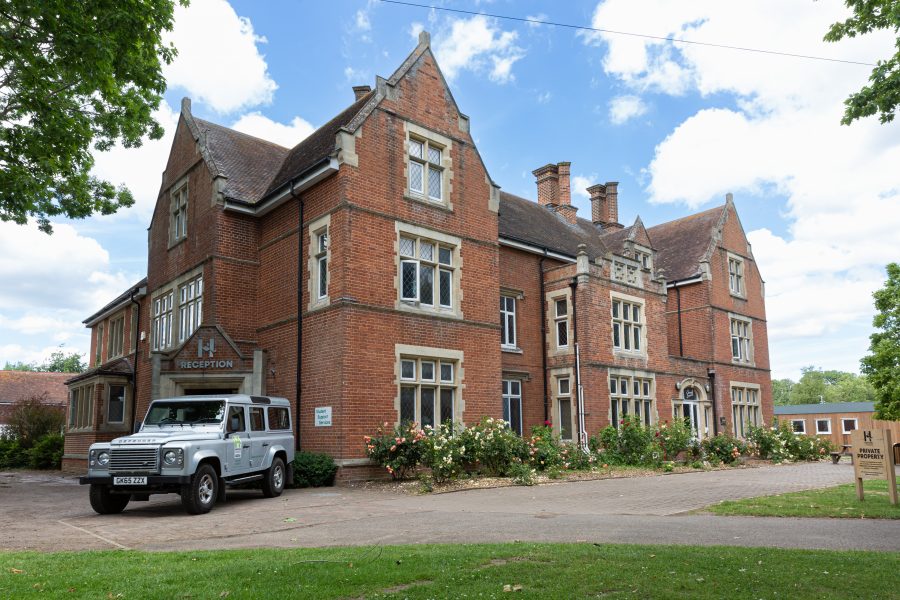 After nearly three decades working in further education, it was going to take something extra special to give Chris Lydon an inspirational new challenge.

He found it at Hadlow College, a revitalised centre of excellence that is looking to the future with new buildings and facilities, improved student accommodation, closer links with the community and a commitment to ensuring that learning leads to job opportunities.

“I feel very privileged to be here and to be supporting the staff and students at this inspirational place at the start of a new chapter in the life of Hadlow College,” said Chris, who was appointed vice-principal at the start of this year.

While he has only been in his current role since January, Chris has played a major part in re-establishing Hadlow, the only land-based college in Kent, since it was taken over by North Kent College after a spell in educational administration.

As an integral part of the new North Kent College set up, Chris has made sure that Hadlow has kept its branding and its individuality in deference to a history that stretches back more than 100 years. “This is a special place with special links to the local community and close ties with professionals in agriculture and horticulture, and we value the Hadlow brand,” he explained.

“It’s not a formal strapline, but I often say to staff, colleagues and students: ‘We are Hadlow’ as it sums up to me the close links between the college, the industry and the town.”

As part of its review of Hadlow, the Department for Further Education (DFE) recognised that the campus needed support to allow significant upgrading and modernisation of the site.

It was in November 2020, three months after the handover to North Kent College, that Chris, with 27 years’ experience working in senior leadership roles within further education, was brought in as project director to oversee the capital programme that is now coming to fruition.

That investment, under his guidance, has seen the college facilities consolidated on the main campus, with higher education student accommodation moved from Grove Farm and the glass house and motor vehicle workshop relocated from Court Lane.

“Bringing the 180 units of student accommodation over to the main site has not only added a real buzz to the campus but it has allowed us to provide a much higher standard of accommodation for both higher and further education students,” Chris explained. The new accommodation has all been created in existing buildings on the site.

“Our aim is to have everything here on the main campus by September of this year,” said Chris. “Not only does that help to bring the campus to life, but it makes students aware of other opportunities. The motor vehicle workshop has close links with the ag tech facility, and it may be that some of our students will think: ‘Working on this car is fun, but look at the size of that tractor!’ And consider the possibility of broadening their skill set.”

It’s a reminder that at the heart of the changes and the philosophy, the message is clear. Students are at Hadlow College not just to gain a qualification or learn something new but to leave with employable skills and find themselves a worthwhile job in an industry they love.

“That really is our ultimate goal,” explained Chris. “We are teaching relevant, transferrable skills that can lead to real jobs, and working closely with farmers and growers to make sure those skills remain relevant and up to date.“

Those close links with the industry will prove critical from September 2024, when the new T (technical) Level examinations are introduced. The T Level qualification will involve each student undertaking 42 days of placement in industry, and with many hundreds of students potentially needing to find somewhere suitable, the challenge for the college is clear.

To help make that change a smooth one, and to ensure that the views of employers are taken on board across the curriculum, communication with growers, farmers, farming groups, agricultural societies and others within the industry has been a critical part of Chris’s role over the past two years.

He’s spent an immense amount of time talking to those at the sharp end of the industry, and in response has found them helpful, supportive and keen to see Hadlow College succeed in its aim of turning out a well-qualified, skilled, land-based workforce.

It has been an interesting transition from his former roles in further education to one that is so closely focused on land-based industries. “When I first met farming groups and told them that I had no background in farming it was almost like a confession,” he said. “Now I see it as an advantage. I have been able to bring a new pair of eyes to the job and ask questions that someone with a farming background might not have asked.

“It has been a fascinating journey for me over the past two years and I am proud of what we have achieved already in such a short period of time – and what I believe we are going to achieve in the future. Working here amongst such devoted staff and with committed students is a privilege.”

With up to 1,000 further education students and another 200 on higher education courses, the Hadlow campus offers a range of subjects, including equine studies, agriculture, agricultural engineering, land and wildlife management, horticulture and floristry, animal management, motor vehicle, motorcycle and motorsports, carpentry and joinery and fisheries and aquaculture.

The courses are supported by high quality, state-of-the-art resources, including the impressive glasshouse that is now being re-built on the main campus and the new motor vehicle workshop due to be in action by the start of term in September.

Another exciting new development for the college is the creation of a new ‘robotic orchard’ supported by the Skills Acceleration Development Fund and recently planted ahead of the new term.

Aimed at promoting sustainability, now a vital part of land-based industries, the cutting-edge orchard has been planted with vines and stone fruits and will enable students to use and learn about automated spraying, robotic harvesting and the use of drones for such things as mapping yield.

After the challenges posed by Covid-19, student numbers are climbing, and the improved facilities and restructured campus are set to see that growth continue, said Chris. Significant investment has also seen the site benefit from a complete rewiring programme, a new IT network and new computers and other equipment. “This really is a great time to study at Hadlow,” he added.

As well as offering land-based courses, Hadlow College benefits from having its own farm, which spreads across the surrounding countryside and will shortly be managed in house so that students can be involved in making decisions.

The farm has a working beef herd of around 50 head of cattle plus more than 600 sheep and arable land that is used for growing maize and wheat. Hadlow College’s pigs are not part of the farm but are kept for animal management studies, along with goats, llamas, alpacas and wildfowl. The college also has 64 horses in support of equine studies that include sports therapy and rehabilitation.

Another benefit for animal management students is that Hadlow College is home to the National Centre for Reptile Welfare, a charity that allows students to study the animals in its care as part of the deal. “It gives our students access to a broader range of animals and adds to the diversity of the offer,” said Chris.

“The college really feels like it is going places, and the sheer scale of investment shows that it has confidence in the team here to deliver a great education to the next generation of farmers, growers, technicians, equine specialists and other professionals across the range of subjects we teach.”

That need to prepare students for work is a constant thread as Chris talks about the college. While other institutions offer mind-broadening experiences and degrees in academic disciplines, Hadlow College is about helping youngsters transition from school to work or higher education. It’s a no-nonsense approach that has the support of the industry.

“We are aspirational on behalf of our students and we are also trying to play our part in solving the labour shortages in agriculture and horticulture,” he said. “We are speaking to employers and making them part of the conversation. At the end of the day people come to Hadlow College so that they will be able to get a job, and we are here to help them do that.”

The college is also an integral part of the local community, with around 11,000 visitors enjoying the recent lambing weekend and an annual country fayre equally well supported, not least by the staff who give up their weekends to help out at such events.

Students are encouraged to understand their responsibilities not just to the community within the college but to the wider village that hosts it. Litter picking and helping older residents with window boxes are just two ways in which the Hadlow equivalent of ‘town and gown’ are encouraged to come together.

“Integration is important to us,” said Chris. “We want the local community to be as proud of Hadlow College as we are of the students who study here before heading off to work in the land-based industries that play such a vital part in all our lives.”

Glass Houses are being constructed, moved from another site

Chris Newman with a snapping turtle.

Former students with a Burmese python

The new concept vineyard and orchard.