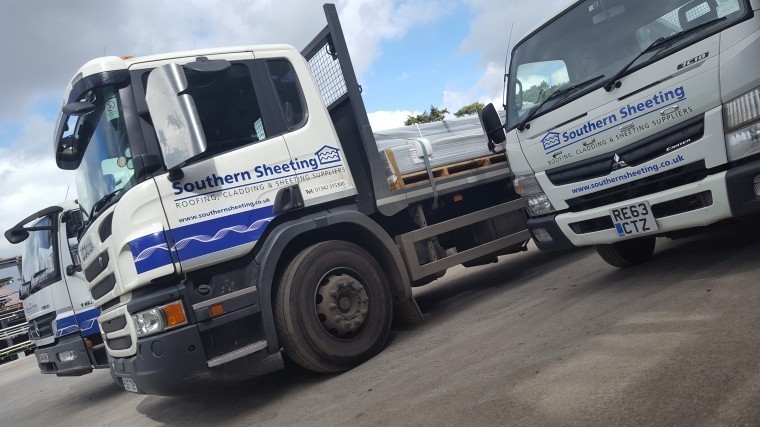 When Tom Hobbs sold his dairy herd and bought two new tractors to support his remaining arable and beef enterprise, he used the left over cash to buy some state-of-the-art roofing sheets.

His £250 investment in stock was the start of Southern Sheeting, the East Grinstead-based supplier that today, 40 years on, holds stock valued at around £1m.

That 4,000-fold increase in stock highlights the remarkable growth of a family business that is now the South East’s largest and most comprehensive stockist of metal cladding and corrugated fibre cement sheeting and the region’s biggest distributor of Tata insulated cladding panels.

The company now employs 34 members of staff, with 20 of those people having been brought in over the past five years to support Southern Sheeting’s continued growth and expansion into new areas of business.

Those staff and their families were among 200-plus guests who helped the company celebrate its 40th birthday at a family fun day at Deers Leap Park, in the grounds of Saint Hill Farm, where the business was born in 1979.
“Dad wanted to re-roof the grain store at the farm and bought some new plastic sheets that had to come all the way from South Wales,” explained Tony Hobbs, who now runs the business.

“When several neighbouring farmers admired his new roof and asked him how they could get hold of the sheeting which, unusually for the time, was rust and rot proof, he decided it could be a business opportunity.

“The Agrilux sheets were being imported from Israel by a company called Brohome based in South Wales, and as there was nowhere local for farmers to buy them, dad became a Brohome distributor here in East Grinstead.

“At that time he had a dairy herd as well as an arable operation, but with milk prices falling he and my grandfather Leonard decided to sell the herd and focus on beef. He used the money from the sale to buy new tractors for the arable operation, spent the rest on Agrilux sheets and the rest is history.”

An impressive history it is, reflecting Southern Sheeting’s steady growth and diversification while continuing to serve the farming community across the South East.

“One of our main strengths is that we are happy to give people technical advice and support, which is something that general builders, in particular, find helpful,” Tony explained.

“Because they are builders rather than specialists, when they are asked to re-roof a garage, for instance, they arrive here expecting to drive off again ten minutes later with a dozen roofing sheets.

“What they aren’t expecting is to be offered such a huge choice in dozens of different colours, finishes, gauges, coatings and life-expectancies, all designed to achieve different results. Once they have picked themselves off the floor, we guide them to their best option and give them the technical advice they need to install it properly.”

That advice and support is a vital part of Southern Sheeting’s appeal and is something Tony and his team are determined to hang on to despite continuing to grow and introduce new technologies.

“People want everything quicker these days, and they expect 24/7 access to what they need. We have responded by introducing new IT systems, launching a Southern Sheeting smartphone ‘app’ and offering online e-commerce sales, but we have been careful not to lose the personal touch,” he said.

“People can now order online and have their sheeting, fittings and other purchases delivered within 24 hours, and that’s great if they know what they want.

“In short, we are embracing the opportunities that technology is giving us, but not at the expense of the customer service that has always been part of the Southern Sheeting brand.”

While the company is looking to the future, this year is also about celebrating the first 40 years and embracing the links the business, and the Hobbs family, has with the local community.

Alongside July’s fun day, which brought together staff and their families, customers, suppliers and others who have been part of the Southern Sheeting story over the past 40 years, the company has made a major charitable commitment to local groups to mark the anniversary.

Staff have come up with six projects, ranging from repainting the walls of the East Park Riding for the Disabled indoor riding school to clearing undergrowth from Ashdown Forest, and the company will be donating 40 person hours – six or seven people on each day – to each of those projects.

“It’s our way of giving something back to East Grinstead, which has been our base for all these years and is home to virtually our entire workforce,” said Tony.

“Dad, who died in 1996, was a school governor and an active member of the NFU locally, I have been involved in Scouting and Guiding for the past 25 years, my mother Vera helps out with a number of community groups and works with the Riding for the Disabled Association and my brother Nick belongs to, and promotes, a local military history group.

“We wanted to celebrate our 40 years in a way that would also highlight Southern Sheeting’s commitment to the town and the people living here, and we decided that giving time and effort to the community was a good way of doing that.”

The other major celebration this year will be a sponsored walk – 40 miles long, naturally – from Brighton to East Grinstead on 14 September. The walk will raise money for this year’s chosen charities, St Catherine’s Hospice in Crawley and the environmental organisation Plastic Oceans, and there will be 40 kilometre and 40 furlong (five miles) alternatives for those who won’t be able to manage the full distance.

The company is also celebrating its long-serving staff of whom a number will have retired by the time the half-century comes around and Tony wanted them to be included in the celebrations.

Delivery drivers Phil Joslin and Mick Stevens will this year have served 25 years and 20 years respectively, while finance manager Chris Saunders clocks up 23 years this July.

Southern Sheeting is now jointly owned by Vera, Tony, his sister Rebecca and Nick, who also plays a major part in helping keep the supply lines flowing smoothly after setting up South East Fabrications to make trims, fascias, gutters and other components in coated steel or aluminium.

The business, which employs nine people, is also based at Deer’s Leap Park and increasingly offers fabrication services for other customers, but its main role is to supply the bespoke fittings that complement the products sold by Southern Sheeting.

“We stock a huge range of products but most of the flashings and trims are bespoke, and so previously we could only order them from the manufacturer once phase one of the job was finished,” Tony explained.

“That meant a frustrating delay for customers who wanted the job completed quickly, and so in 2008 Nick set up SEFAB to manufacture the fabrications we needed.

“It has worked very well, giving us a quick, reliable supply of flashings, trims, fascias and other fabrications, and has also won business from other companies that need specialist items.”

Another loyal member of the team until his recent retirement was Richard Nichols, who helped out on the family farm as a ‘Saturday boy’ at the age of 15, can remember the new tractors being delivered and was around for the start of Southern Sheeting in 1979.

He worked for the company throughout its 40 years to date and retired in April after an impressive 51 years, although he frequently returns to help Nick out with the fabrication business at busy times.

While the agricultural clients who dominated the company’s first 20 years are still important, the emphasis has shifted from re-roofing hay barns and cattle sheds to helping farmers convert buildings to industrial lets.

That support is particularly comprehensive, with Southern Sheeting able to deal with everything from the site survey and planning issues through to advising clients on the options, designing the building and then either supplying the materials or carrying out the entire project, from groundworks to warranties.

“We are the only cladding supply company in the whole of the South East to offer the full package,” explained Tony. “We began offering a complete steel-framed building service four years ago and it has gone from strength to strength.

“Clients like the consistency and one-stop shop offer and the fact that we can do the whole job, from concept to hand over – and give them one invoice for the entire project. It’s a highly tailored service led by projects manager Ben Harris, who works cooperatively with the farmer or builder to make sure we deliver exactly what they need.”

The success of this recent move into steel-framed buildings is evidenced by the order book, with Southern Sheeting constructing one new unit a month on average.

The business has seen considerable growth in supporting specialist roofing and cladding contractors within the commercial and industrial sectors in recent years, together with general builders and other walk-in customers.

For the latter category, Southern Sheeting’s guarantee that for certain product ranges it always has everything in stock – across the colour range – is important. “We carry about £1m worth of stock across 20 ranges and 1,000 stock lines. It’s extremely rare for us to run out of anything,” said Tony.

Popular product lines include Cedral weatherboarding and Trex decking, which is popular with house builders and homeowners respectively. Southern Sheeting also taps in to this market by supplying re-sellers including the larger ‘blue chip’ building supplies merchants and a multitude of independent concerns.

“We act as a second warehouse for some of the big name retailers and smaller independents who don’t have the space to carry the stock we hold,” Tony explained.

With customers demanding faster service – what Tony refers to as ‘the Amazon effect’ – the company’s biggest expansion has been in its delivery fleet, with three new vehicles seeing the fleet double in the past five years.
“We are determined to give the customer what they want – and if that means investing in new vehicles to give them a higher quality service, that’s what we have to do,” he said.

Improving the delivery service, upgrading the computer system, offering online purchases, introducing a turnkey steel-framed building offer and preparing for a new website rollout in six months’ time have all contributed to the company’s success as it celebrates its 40th birthday.

But while enjoying the anniversary and celebrating the contribution his team and the local community have made to that success, Tony’s focus is clear. “It’s the next 40 years I’m really interested in,” he concluded.