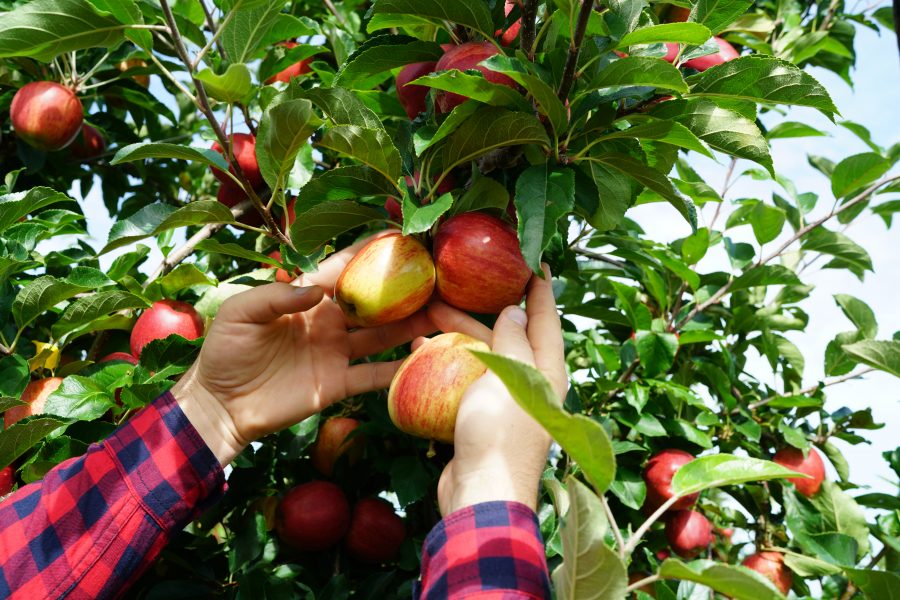 This month Nigel Akehurst visits Hempstead Farm in the village of Tonge, near Sittingbourne in Kent, the home of G H Dean and Company, to find out more about their award-winning pear and apple orchards. He caught up with head grower Lukasz Kaminski for a tour and chatted to chief executive Tim Malpas about their environmental plans and their drive towards net zero.

Pulling into the large farm yard at G H Dean and Company Ltd, I make my way past a number of large cold store buildings to the main office where I meet chief executive Tim Malpas and head grower Lukasz Kaminski.

We sit down in the board room, where Tim gives me a quick rundown on the history of the business.  The company traces its origins back to George Smeed, who came from humble origins to establish one of the three main brickworks in the town producing yellow stock bricks.

After securing land to maintain a supply of brickearth clay for the factory, Smeed planted orchards on each parcel of land as he finished removing the clay. The “Smeed Dean” operation remains active today as part of the Weinerberger Group and has supplied vast quantities of brick into London for buildings including Buckingham Palace and the Tower of London.

The farming company was established by George Hambrook Dean, who introduced a small flock of 16 sheep to Hempstead Farm in 1920 and has engaged in a broad range of agricultural enterprises over the past century.

Fast forward some 100 years and the large, family owned business now produces around 10% of the UK’s pear crop on 100 hectares of orchards. They also have 40 hectares of Gala apples and supply all their top fruit through ABB Marketing Ltd and AC Goatham. In addition, they grow 24 hectares of cherries and have a two-hectare trial plot of plums, growing 11 different varieties as part of a knowledge exchange group with other growers overseen by NIAB.

To find out more we head next door, where after we don high vis vests Lukasz shows me around one of their large cold store buildings. Entering the huge passageway, I notice a large room to my right stacked with boxes full of pears. This is where the fruit is brought in from the orchard to be chilled to below five degrees Celsius, he explained, as a near silent (electric powered) fork lift entered the passageway behind us carrying a fresh bin of pears.

“Each bin has a unique barcode providing full traceability of where and when it was harvested,” he added, referring to just one of an increasing number of compliance measures now required. These vast cold stores require a lot of energy to run, though this is partly offset by a sizeable 320kw rooftop solar array. I later learn from Tim that they plan to triple this to a megawatt in the next six months to help with the rising cost of energy.

We then jump into one of their company pickups and take a short drive up the road to a pear orchard, where their team of 88 pickers is busy harvesting.

Last year nearly 50% of the workforce were Ukrainian and “they have been missed,” he said. Thankfully, they haven’t suffered the supply issues reported by several other UK growers and their agency AG Recruitment has successfully recruited enough workers through the Government’s seasonal workers scheme.

“At times communication can be a challenge,” he said. “With around 10 nationalities, many are from central Asia, but most speak some Russian, which helps.” All the workers live onsite in a mixture of pods, caravans and converted farm buildings.

The fruit pickers work in small teams and harvest the pears by hand into baskets worn around the body. These are then carefully emptied into wooden crates that sit on top of small trailers that are linked together. The fruit is inspected as it is unloaded into the boxes by a quality control officer, after which a barcode is printed and stuck to the side of each box. They are then transported to the cold store by a small tractor.

So far, the harvest has been “okay”, said Lukasz. Yields across the new and older orchards have averaged 36.6 tonnes to the hectare, with their younger orchards averaging more than 50 tonnes. A pleasing result given the summer drought, he felt.

One of the biggest threats to their pears and apple crop is scab, a fungal disease that causes dark, scabby marks on the fruit and leaves. “Luckily it hasn’t been a problem this year, but it was a different story last year,” said Lukasz. The persistent wet weather meant they were left with no choice but to apply a fungicide to protect the crop. They used a new trailed orchard sprayer from Munckhof which has improved coverage in the top of the tree. Lukasz described it as a worthwhile investment “as fruit quality has improved though targeted application”.

They only spray when necessary and use a number of different tools to monitor plant health and weather conditions, using high-tech micro weather stations located through the orchards that transmit real time data back to Lukasz via 4G sim cards. They also use drones and software supplied by Outfield.

Another bit of kit they are pleased with is their variable rate KRM fertiliser spinner, which has allowed them to target areas that are nitrogen deficient. All their orchards are now satellite mapped, he explained, and they are now able to farm by the centimetre and not by crop or orchard as was done in the past.

G H Dean and Company are proud of the fruit they produce and regularly pick up awards, winning a first place in the East Kent Fruit Society awards this year for their pears. Their crop of around 6,000 bins represents around 10% of total UK production. Nearly a third of their orchards are now planted on a modern trellis system and they plan to increase this area over time.

Not only are the modern orchards more productive, but they are also designed to work with mechanical harvesters and robotics (when the technology is finally ready and cost effective). All the modern orchards are standardised with 3.5 metre row widths. The trees are planted north to south to allow for better light distribution (as opposed to east to west, where the fruit can ripen unevenly and involves multiple passes when picking). All their trees are drip line irrigated via a bore hole, which allowed them to keep the trees well-watered at night during the recent drought.

Planting trees is always a long-term investment and, in the case of pears, one that will continue to yield productive fruit for between 30 and 40 years (as opposed to apples which deliver fruit for around 20 years).

Expanding and modernising their orchards and rationalizing their systems has been an ambition, although Tim is finding it difficult at the present time to justify the investment, with concerns over high inflation, the cost of living crisis, rising labour costs and increasing market uncertainty.

To combat this the company is looking to maximise yields and increase efficiencies across the business and to constantly strive to do better.

“Robotics is still at least 10 years away, but like other growers in the industry we are beginning to trial mechanical harvesting, in the hope that we can reduce our reliance on labour, but this will mean replacing our growing systems,” said Lukasz.

Moving onto apples, Lukasz shows me around some of their Gala apple orchards.  Early indications for their 40 hectares of apples are “good,” he said. Having sampled a couple, I can confirm they tasted pretty good, too.

“Scab was the main problem last year,” he said, but they haven’t suffered this year, which has been helped by the fine dry weather. Showing me some of their different orchards he pointed out the crab apple trees which they plant as pollinators against the supporting stakes, freeing up 6% of their orchard planting area.

He also pointed out many of their rows are sown with wild flowers to help attract more bees and beneficial insects.

I was also interested to see the difference in the ripeness of the apples in their north to south planted orchards versus the older ones that were planted east to west. He also pointed out many of their windbreaks, which are planted with mixed species to promote pollinators and provide beneficial insect habitats.

While the yield forecast looks promising, the market is less certain, with reports of growers in Europe selling first class apples early and for processing as there is a reluctance to store with the fear of rising energy costs.

As with their pears, they are following a long-term investment strategy and looking to increase their orchard size. This winter they will be planting 10 hectares of Magic Star, a variety with good yield potential, great taste, strong genetics and long term storage capability, said Lukasz.

All their trees are supplied by Fleuren Nursery, based in the Netherlands. They produce “top quality trees” and the company has worked with them for decades,” said Lukasz. The planting is carried out by local contractors who sub soil the rows before using a small tractor-mounted auger to dig the holes. They then plant the trees and cover them with PAS 100 certified compost to help retain moisture and promote bug life and flies. As with the pear trees, all the apple trees are irrigated from day one.

Other enterprises and building a pathway to Net Zero

We head back to the office and I catch up with Tim to learn more about the other aspects of the farm. He explained that fruit is just one of enterprises on the farm, a holding that extends to nearly 1,800 hectares.

A sizeable chunk of that is arable, he explained, running to around 1,200 hectares with a sheep enterprise of 1,500 breeding ewes over part of the area, using cover crops and delivering the ‘golden hoof’.

“An overarching objective between all enterprises is to become more integrated and experiment with regenerative agricultural techniques as we progress on our pathway to net zero.” Tim said

G H Dean & Co has recently entered into a new higher tier agreement, which Tim is particularly excited about. The scheme’s main focus is on the marshland and improving habitat and conditions for breeding wading birds by opening up more bodies of water and improving habitat for farmland birds, water voles and the shrill carder bee.

With a large land base, they are also seeking to create a green corridor to provide a better and more joined up habitat between their higher (arable), middle (fruit) and lower (grazing) marsh ground. He can also see the benefit of working at a landscape scale and is hoping to link up with other local farmers and landowners as part of a local farm cluster group this autumn.