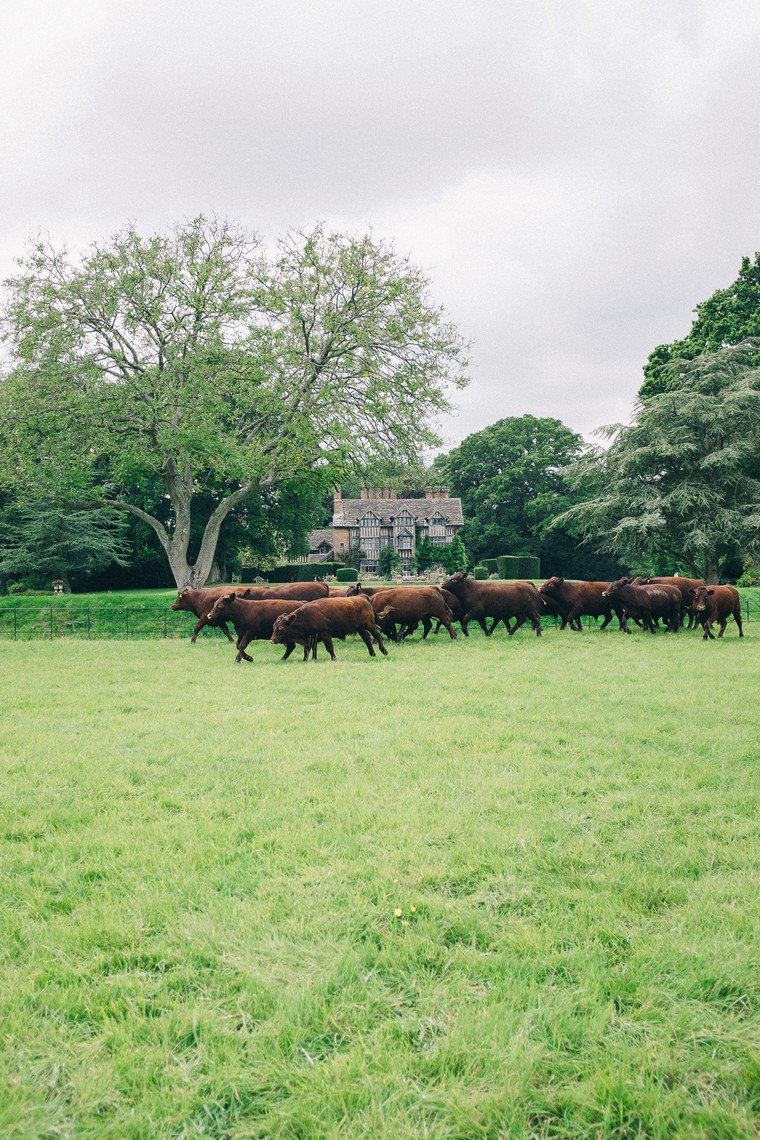 Great Ote Hall, built by the Godman family almost 600 years ago, is a stunning building that sits at the heart of Sussex and is central to Ote Hall Farm, a beef and arable enterprise that is still run by the family.

In the modern world, though, farming in its simplest form is too precarious an occupation to fund the upkeep of this beautiful building as well as paying the bills and allowing the family to earn a living.

It’s why the family business headed up by Carola Godman Irvine and ably supported by her sons Matthew and Charley has diversified significantly over the past quarter of a century, with former dairy buildings now used as business units and Great Ote Hall and its surrounding gardens a popular wedding venue in the summer months.

The ambitious venture that is now set to take the business to the next level is a farm shop and restaurant complex, recently granted planning permission by an impressed Mid Sussex District Council.

As Carola herself explained: “Ote Hall would not have survived as a purely traditionally run farm without having already diversified with business units and as a wedding venue. The farm shop project is essential to future-proof the farm financially, now and into the next century.”

It is a measure of the way the hall, farm and family are so well integrated into the local community that the plans for the new build venture on what is essentially a greenfield site were passed unanimously after receiving total support from villagers in Wivelsfield and nearby Burgess Hill.

Planning committee chairman Cllr Gary Marsh not only said that the council “strongly supported” this type of application, which he said “showcases the rural economy at its best,” but said he had never before known such an application to attract not a single objection from neighbours.

Carola explained that the farm was increasingly becoming part of an urban area, with thousands of new homes built in or planned for the area, and that local people regularly used a network of footpaths that crossed the farm. One popular circular route takes in the historic St. Peter and St. James Church in Wivelsfield, which boasts an ancient yew tree mentioned in the Domesday Book.

“During the first lockdown last summer we sometimes had as many as 1,000 people a day walking up the drive before heading off on one of the many footpaths across our land,” she said.

“We were happy to see them enjoying the countryside – although the walkers do quite some damage in the current wet weather as they are broadening the footpaths and trample the crops – and I think they appreciate our efforts to be part of the community.

“After all, if you are privileged enough to live and work in a place as beautiful as this, the last thing you want to do is shut the gates.”

Local people are also set to benefit from the latest diversification initiative, with the “sustainable shopping and dining experience” expected to create anything up to 25 jobs for local people.

Alongside the farm’s home grown beef from its herd of Sussex cattle, the farm shop will also sell local produce where possible, giving local farmers, growers and other entrepreneurs a potential extra outlet for their produce. The plan is to include a butchery, delicatessen and perhaps a bakery when the venture opens next year.

The Godman family built Great Ote Hall in 1530, added an extension in 1600 and built the more recent range of farm building in 1880.

In 1939, Carola’s mother Val married Tony Godman, but just 15 months later he was killed when the ship on which he was serving took a direct hit during the siege of Malta, early in the Second World War.

“Tony had told my mother that if anything happened to him she should carry on and take care of the farm, and so she did,” said Carola. “She worked incredibly hard, with the help of prisoners of war and Women’s Land Army girls to run the farm. She used to ride a horse over to Plumpton College to ask for their advice.”
At the end of the war, Val’s mother-in-law introduced her to Bryant Irvine, who later became Member of Parliament for Rye and Bexhill. The couple married in 1945, with Carola’s mother continuing to do the practical work on the farm while her father helped with the administrative side of the business.

“It’s amazing to think back to how hard she worked,” Carola said. “As well as looking after the farm’s prize-winning pedigree Guernsey herd and running a home she was always busy making butter, cheese and bread and doing the hundreds of other jobs that need doing on a farm in the days before we had so much mechanisation.
“She taught me a lot about independence and about the fact that when you ask someone to do a job, you really should know how to do it yourself.”

Carola is very aware that she and her sons are now responsible for Ote Hall Farm, for the heritage of the impressive buildings and for the legacy left by the Godman family. “We are privileged to be here,” she said. “It’s hard work but we enjoy it.”

After a childhood of helping out on the farm – “I loved the cattle and the calves” – Carola studied at Plumpton College but “went off and did other things” before taking on the responsibility of running the farm on behalf of the family trust after her mother died in 1990. Her father died two years later.

By that time Ote Hall had long since left dairying and switched to a Sussex beef herd, via Aberdeen Angus and even some Simmental and Limousin cattle.

Carola now buys in pure-bred Sussex steers which are grass fed and traditionally reared before being sold to farm shops and independent butchers locally and in London. She no longer breeds cattle.

Through contacts of elder son Matthew, 37, who has worked in Singapore for the past ten years, she has pending contracts to export Ote Hall Sussex grass-fed beef to that country, too, but due to a lack of AVA-certified slaughterhouses in the south of England, this has been put on hold.

The slaughterhouse issue is something Carola has taken up with DEFRA. She wants the department to provide funding to allow small abattoirs to upgrade their facilities to meet the higher standards and, as a seasoned campaigner who never shies from putting her head above the parapet, is also asking DEFRA to end the over thirty months (OTM) scheme for beef cattle.

She argues that with BSE now essentially a distant memory, the rules are no longer necessary and are harming the industry. “This country produces some of the best beef in the world and it gets better as it ages,” she explained. “The OTM scheme is no longer relevant and should be dropped.”

With around 340 acres of land at Ote Hall and a further 200 at nearby Randolph’s Farm, Hurstpierpoint, the family grows wheat and barley plus beans or oats as a break crop, but as Carola explained: “These days our emphasis is not on traditional farming, ie our cattle and crops, but on ‘farming people’, through diversification.”

In 1995 the family converted former dairy buildings at Ote Hall into eight business units. These, and others at Randolph’s Farm, which was bought in 2011, are always fully occupied and currently house a range of concerns including a heating engineer, a window and door installer, builders, a fitness studio and a company selling ear defenders.

Ote Hall and the beautiful gardens surrounding it have been a popular marquee-based wedding venue since 2008, with the family taking a relaxed attitude to time and space. Guests are able to use the land for camping and can spend the entire weekend at the site, with the wedding itself just part of the experience.
After 18 months of planning, and taking advantage of the welcome support from local people, the farm shop and restaurant is the next stage in the business’s growth.

“We plan to make the restaurant an extension of Ote Hall in the feeling of welcome and serenity it inspires, with a real fire, comfortable seating, a bar and great service,” said Carola. “Diners will be made to feel more like guests of the family.” The restaurant will offer 120 covers.

Carola paid tribute to her team of professional advisers, including Mark Ellis at Appetite Me, Andrew Hodgson at Pegasus and Graham Boyce at ArkleBoyce. “Their specialised and expert advice and design ensured that this project will be an attractive addition to the precious heritage and reputation of Ote Hall and the Godman family,” she commented.

Since Carola is opposed to subsidies and is uncertain that anything in the upcoming agri-environmental scheme will be particularly relevant to Ote Hall, she is candid about the need for the latest diversification. “The farm shop and restaurant are hugely important to keep the farms financially viable into the next century,” she commented.

“As far as tree planting schemes go, all the trees and hedges shown on the map in 1641 – bar one hedge – are still here, so I’m not certain there’s much more we could do there,” she added. “And we have been ‘min tilling’ for the past 27 years, thanks to the help and expert advice of Robert Plumb of Soil Fertility Services.”

Although Matthew and younger brother Charley are both pursuing successful independent careers, they remain actively involved in decisions on the farming business, while Carola’s daughter Nina will help with the farm shop. “It’s important that they play their part as they are the future and they will take forward the heritage and legacy of Ote Hall,” said Carola.

The family also plans to create the ‘Godman Foundation’, which will promote education, training and mentoring of young people, including those with disabilities, using profits from the new business.