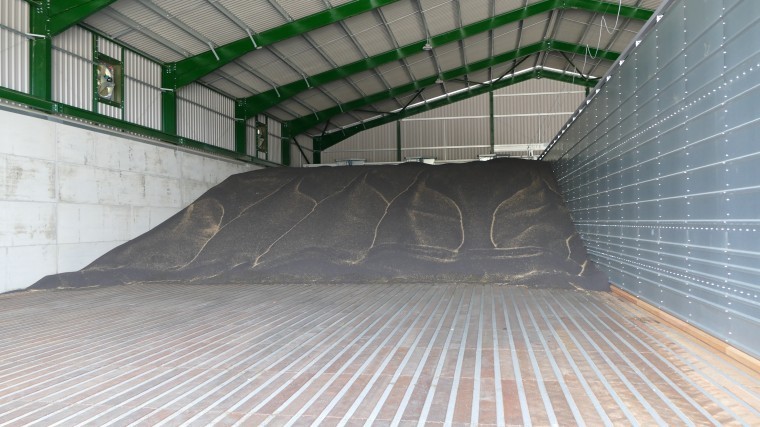 After one dismal year where only 10 out of 60 acres worth of his harvested potatoes were sold, Essex based farmer Charles Tabor decided it was time to give up the increasingly unviable crop and focus his efforts elsewhere on the farm.

Today, the family run arable operation, headed up by Charles, his wife, their son and daughter-in-law, extends to 2,900 acres which is spread across two sites, with around 800 acres at Hollylodge Farm in Manningtree, North Essex, and 2,100 acres at Sutton Hall Farm, situated just outside Rochford.

Alongside 78 acres of grassland and some leased land, for the 2019 season there are 1,747 acres of winter wheat, 540 acres of oilseed rape, 231 acres of spring beans and 111 acres of winter beans planted. Charles is also growing 113 acres of peas for the last time this year, as they “tend not to yield well”, and is trialling 42 acres spring oats to see how they fair.

“This season oilseed rape has been very average, as far as we can see the first wheats look good, but the second wheats have really struggled after the terribly dry spell early on in spring,” said Charles, whose family have been involved in the Essex agricultural scene since the 1860s. “Spring beans certainly look a lot better after last year’s poor performance but it is too early to start talking about anything else.”

Bulging at the seams

While Charles would rightly rather wait until everything has been safely harvested before discussing 2019’s yield performance, one thing was certain before drilling even took place: long-term on-farm grain storage was in short supply.

“In the 50 years I have been farming, wheat varieties have improved drastically,” said Charles. “I remember when we talked about averages of two tonnes/acre and now we grow Crusoe, KWS Zyatt and RAGT Skyfall we achieve four tonnes/acre, if not five tonnes/acre. Last year our wheat yielded about 4.5 tonnes/acre and we were bulging at the seams, so we knew it was time to invest.”

Although a new grain store had been on Charles’ mind for the last five years, it was the sale of some land “ripe for development” on the west side of Rochford which finally gave the go-ahead for the 2,000 tonne, twin bay store.

“With the government really pushing for new housing we decided to sell to a housing developer and with the ‘Bellway money’ we have been able to invest in the new store and have also bought 900 acres of neighbouring farmland,” said Charles.

The task of taking the site from greenfield to grain store, putting in for planning, bringing a team of contractors together, keeping everything running smoothly and guaranteeing that it would all be ready in time for harvest, was given to Mike Wilson and David Elliott at Harvest Installations.

“I have known Mike since the 1980s and met David a few years ago when I needed to convert our redundant potato store into a grain store,” said Charles. “After we stopped growing potatoes, we decided to use the store one year for 900-tonnes of wheat. We ran into problems because the gas which we used to stop potatoes from growing had leached into the concrete floor. When we came to sell the wheat, the grain was rejected because there were small traces of this chemical and so everything had to be stripped out and replaced.”

Since replacing the floor and air ducts in the ex-potato store, crop drying specialists Harvest Installations has also installed a 1,000 tonne store for the Tabor family at their Manningtree site.

Planning for the new store was submitted in 2018, with construction commencing in February 2019. The 2,000 tonne store includes a steel frame from AC Bacon, two fans, an air duct which also acts as a central divider, a stirrer (with plans to potentially add another if Charles can secure funding through the RPA’s new Countryside Productivity Small Grant Scheme), and an external concrete loading area, which also doubles up as a car park for the on-site wedding and events venue.
“There is also a humidity control unit in the new store which will be used a lot because I always try to dry predominantly with ambient air to save costs on propane gas,” said Charles. “We also have a specialist wooden ventilated floor from Challow. This drive-on drying floor system was also installed into the ex-potato store and we have found it to be just brilliant.”

The Challow floors are air permeable, drive-on timber floors which are set on a level concrete sub floor. Able to carry virtually any pneumatic wheeled vehicle, the floors are supported by Tanalised® E pressure treated softwood bearers which form apertures through which air is blown by a fan via a main air duct. Particular areas of floor can then be individually ventilated through the main air duct and apertures are designed for optimum air space and low resistance. There are also clean out panels fitted which allow for easy removal of dust and small trash.

The 2,000 tonne store is already being used for oilseed rape, with the other bay being reserved for wheat. While many farmers are put off the idea of on-farm storage, seeing it as an added complication and huge investment, Charles says that it gives them far more control and pays dividends.

“You have to get everything in at the right temperature and moisture, we don’t combine over 19%, and once it is in, you have to keep the air flowing through to keep it sweet,” said Charles. “By keeping it on farm not only do we avoid the high transportation costs which are often involved with sending grain to cooperative storage, but looking at the figures too, we do tend to find that we can do much better ourselves in most years. Last year, for instance, there was an instance where the Hagberg decreased in grain which was harvested after a wet spell. If it had gone to a cooperative, they might have been able to blend it, but we were able to isolate it and agreed to sell for full milling price, minus deductions, which worked out very well and we simply wouldn’t have been able to do that if we weren’t storing on our own farm.”

All grain from Tabor Farms is sold ex-farm through Harlow Agricultural Merchants, which Charles has been working with for the last two decades. The farm aims to sell a certain tonnage per month and Charles also keeps a keen eye on prices to ensure that he can take advantage of any peaks.

“Overall we really do have more control over our grain,” said Charles. “We know the team at Harlow very well and they have really done us proud. If the prices are particularly good, we will sell a block, but on the whole, provided all the grain is out by July, we know we have a steady flow of income.”

With over 30 years’ experience in providing high quality and cost-effective crop drying and storage solutions to farmers across the entire South East of England, Harvest Installations has also recently fitted a 4,000 tonne store in Ashford, Kent.