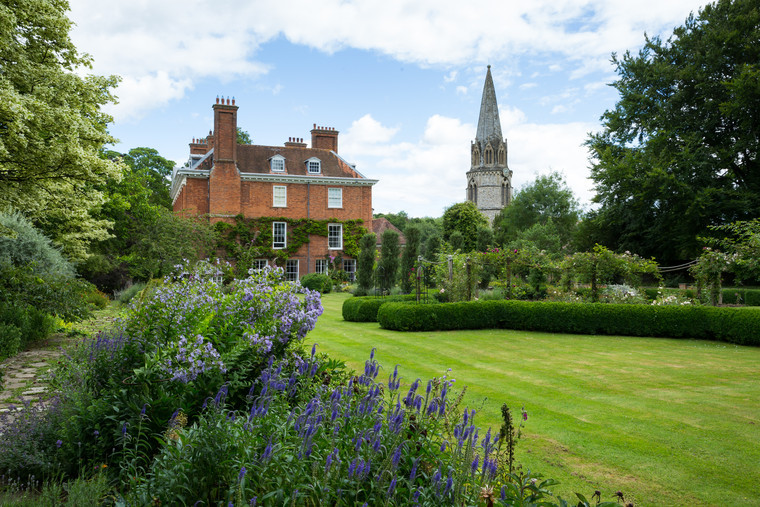 The Welford Estate has been owned by the ancestors of the Puxley family since the 17th Century. At one stage the family’s ownership covered more than 9,000 hectares in six counties.

The Welford Estate was the smallest of the family’s holdings and when the remaining land was sold after the First World War, this estate was retained, although reduced in size. Following compulsory acquisition of approximately 280 hectares, the estate now extends to 1,140 hectares straddling the M4 to the west of Newbury in Berkshire.
The estate has diversified over the years, converting a range of buildings into offices, numerous cottage lettings, a former landfill site and a syndicate shoot. James and Deborah Puxley live in the main house. For the past six years the gardens and outbuildings have been the location of a well-known TV show.

In addition, every February around 15,000 visitors come to see the estate’s display of snowdrops. This has been a tradition at Welford for many years, with some of the proceeds going to support local charities.

The estate is in many ways a traditional farming operation. It takes its role within farming and the community very seriously. Heading up the farm operation is Rob Waterston, who took over the farm manager’s role when his predecessor moved to New Zealand in 2007.

Before that Rob worked on a number of farms and farming businesses in Shropshire and Warwickshire. He graduated with a degree in Agriculture and Land Management at Harper Adams back in ’93/’94 and grew up on a farm. His grandfather was a farmer and his father a farm manager.
Beautiful seedbeds, blackgrass and an unsustainable rotation

When Rob arrived at Welford in 2007, around half of the estate was ploughed, with the rest cultivated using a Vaderstad TopDown. All of the drilling was carried out using an 8m Tive drill.

The rotation at this time was of winter wheat, winter barley and oilseed rape. The estate ran the TopDown for several years but found it expensive to maintain, with the flinty loam soil being particularly unforgiving on their kit.

The system required several passes with heavy machinery to create the seedbeds; ploughing, pressing, cultivating and then drilling. “The tine drill struggled with the trash,” admitted Rob.

The estate started to look into different drills that could be pulled by their existing 210 hp tractor, settling on 8m Vaderstad Spirit disc drill in 2012.

They changed their TopDown to a Horsch Terrano, which was all tines. At this point they had a system that could cope with more trash and decided to get rid of the plough, which by then was completely ‘worn out’.

“Around this time blackgrass was becoming more of a problem and we were stacking more pre-emergence herbicides, with mixed results,” said Rob.

“Looking back it wasn’t a sustainable rotation and I was guilty of saying let’s give it one more year,” he continued.

Even with the blackgrass creeping in, they were still getting good yields, he explained.

In 2016 they finally lost the battle with blackgrass in a block of wheat and were forced to spray out 10 ha.

“Looking back now, you can still see to the line where we sprayed and should in hindsight have done more,” said Rob.

To make matters worse the field was in full view of the M4 motorway, sparking several pointed comments from local farmers who suggested they had got their sprays mixed up.

“We decided we had to change our approach,” he said.

That was the first year they grew spring barley. It marked the start of a new phase in their rotation with a move to more spring planting.

In 2017 they dropped winter barley altogether. That year David Lines, their long standing Agronomist, retired and put Rob in touch with Mike and Ben Harrington at Edaphos. This prompted a big re-think, with a new focus on improving soil and plant health while harnessing the soil’s stored resources to their full potential to achieve a healthy, well balanced system.

“We spent time looking at our soils and Edaphos suggested we try planting cover crops,”said Rob.

That autumn they planted three different mixes of cover crop.

“It really caught my attention, though I remember thinking how are we going to cope with the volume of material,” remarked Rob.

“The first year we sprayed it off in good time and found that the residues weren’t an issue.”

They have since gone cover crop ‘mad’, trialling different mixes and using them widely.

“We found a definite difference between each mix in terms of what they captured in terms of nutrients, and slug pressure was markedly higher after oil radish cover crops.

“This winter we had 1,500 sheep to process the cover crops. The sheep did a fantastic job in processing the cover crops, although they did unfortunately poach the ground a little during the prolonged wet winter.”

In an attempt to boost their soil organic matter, they are now chopping straw and applying farmyard manure, spreading approximately 3,000 tonnes of sewage sludge on a rotational basis.

Edaphos have also pushed the estate to adopt a more diverse rotation, which Rob believes is beginning to make a difference.

With oilseed rape yields under pressure, the estate has opted to grow winter beans using the Mzuri strip till establishment system. Beans provide a fantastic entry for winter wheat. Spring oats are also being grown for the first time this year.

“Two consecutive years of spring barley has definitely prevented the blackgrass getting worse, with a few fields showing an improvement in terms of blackgrass pressure,” said Rob.

The one pinch point of the move to more spring planting is that all their harvesting is carried out in a relatively small window in August by their own Claas Lexion 770 combine harvester and 10.5m header. This can put a bit of pressure on the harvesting team, depending on the weather.

Strip till and direct drill

The estate now relies on two drills; a Mzuri Pro-Til6T strip till drill, which was purchased in October 2018 and partly funded with a LEADER grant.

“The Mzuri is used to address compaction issues and condition the soil on a rotational basis. All the cover crops are established immediately behind the combine with the Mzuri,” said Rob.

They also recently purchased a 6m Weaving direct drill as part of their drive to improve the long-term sustainability of the farming operation.

“We use this drill only where we feel the soil conditions are suitable. The GD coulter provides remarkably low soil disturbance and the flexibility to approach zero-til alongside the strip til system,” he said.

“We did the majority of our spring barley with the direct drill this year,” he continued.

In the short term Rob expects to see a hit on yields. Drilling directly into cover crops is quite a culture change aesthetically but something he is starting to accept. Drilling at slower speeds has also reduced daily output.

One concern of direct drilling is its reliance on glyphosate, which Rob feels may be banned in the future, although he added that there was encouraging work being done with crimping or rolling on the frost.

Reducing inputs and taking unproductive land out of production

Variable rate applications of compound and liquid nitrogen fertilisers are applied using the SOYL system. Liquid nitrogen is applied through the Fendt Rogator Sprayer, with eight storage tanks located around the estate.

Rob believes that in time farmers may be forced to use less nitrogen. To combat this they will be experimenting with growing their own fertiliser by under-sowing white clover in their winter bean crop.

“It’s this sort of thing that makes it such an exciting time to be involved in agriculture,” he said.

He is also optimistic that improving their soil health will play a pivotal role in reducing inputs too.

They are doing more to utilise years of yield data to take less productive parts of their fields out of production and provide more habitat for wildlife through the countryside stewardship schemes.

“We are in a countryside stewardship higher-tier agreement on the woodland and parkland and we are a Site of Special Scientific Interest (SSSI),” he continued.

“The family are keen to plant more woodland too,” Rob added.

“Benchmarking has been one of the single best things I’ve done,” said Rob.

“The process typically involves a group of farmers sitting round the table and disclosing our figures,” he explained.

“Everyone has different costs of production but these meetings have been incredibly useful,” he added.

He urges other farmers who aren’t currently involved in some form of benchmarking or local cluster groups to give it a go.

Rob is currently undertaking a carbon audit for the farm using the Farm Carbon Toolkit, with the longer term aim of becoming carbon neutral.

“We are hundreds of tonnes the wrong way at the moment,” he admitted.

Unsurprisingly, their diesel and nitrogen usage isn’t great; two of the biggest offenders. He hopes to reduce both of these as they move closer to his ambition of a no-till farming system.

He is also optimistic that they can start to sequester carbon by building up their soil organic matter.

“Even half a percentage point increase would make a huge difference,” he said.

With lots of footpaths and bridleways running over the estate, Covid-19 has presented some new challenges, with unprecedented numbers of the public out walking, Rob explained.

“We’ve had several situations where members of the public have strayed off the footpaths, opting to walk across recently sprayed fields with dogs not on leads,” he remarked.

On a brighter note Rob hopes that the pandemic will make people think a bit more about where their food comes from.

“It’s not fair to import food that is grown to a lower standard of production than our own,” he said.

I asked which way he voted on Brexit. “I sat on the fence for a while before ultimately deciding to vote remain. I think now on balance it was right to leave but who knows what will happen.”

A farming business fit for the future

The Welford Estate is a fascinating example of a traditional farming estate that is successfully navigating a path towards a carbon neutral future. By slowly building soil organic matter through agro-ecological methods, adopting a wider rotation to combat blackgrass and moving to no till, they are creating a more resilient farming business fit for the future.