Looking to a future without grants - South East Farmer 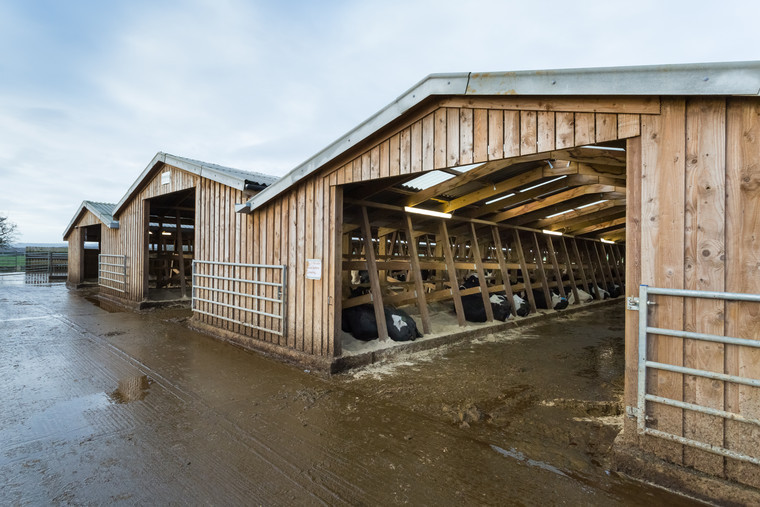 A new dairy at Double Barns Farm in Newick, backed by Agricultural Mortgage Corporation (AMC) funding of £1.2m, will see Sclater Estates Ltd’s annual turnover rise to £3m and allow it to produce between six and seven million litres of milk per year.

The investment in the new New Zealand style 48 point swingover parlour has been accompanied by other new developments, including opening a Christmas shop on the site and growing high-grade Christmas trees for sale both from the estate’s own premises and through a new distribution network.

One of the aims of the Christmas tree business is to reduce the carbon footprint of the traditional festive fir, a product that is often imported from Denmark or Scotland and which comes at a high cost in terms of air mil

The farming part of the enterprise runs as Sutton Hall Farms, a partnership between the landowning company and John Sclater, and his son James. Estate Manager at Sclater Estates Ruth Wallis, wife of the estate’s farm contractor James Wallis, explained that the investment decisions had been made with one eye on the changing nature of farming post-Brexit, particularly the shifting grant landscape.

“When the UK made the decision to leave the EU, we decided that it might not be sensible to invest in any area that was heavily dependent on grants that might end up disappearing,” she said. “Dairy farming has always been one of the least subsidised areas of agriculture and the same applies to Christmas trees, so that helped to shape our thoughts.”

While the Christmas tree planting is essentially a business venture, it reflects the Sussex estate’s commitment to the environment. The team uses minimal nutrients and pesticides on its Christmas tree fields in order to encourage plants and wildflowers and benefit a variety of wildlife, from bees and insects to birds and small mammals.

In another recent diversification, the estate, which also grows wheat, barley and maize in rotation, converted an 18th century barn at Gipps Farm into a Christmas shop that has proved very popular since it began trading in 2018, and plans to build a new barn nearby to support the growing Christmas tree business that is set to ratchet up over the next few years.

With a long pedigree going back over 200 years, Sclater Estates Ltd covers 2,500 acres in Newick, Barcombe, Chailey and Isfield. The land includes around 1,750 acres of farmland, 700 acres of woodland and a further 50 acres of buildings, houses and scrubland.

John Sclater is the current chairman and chief executive of Sclater Estates Ltd and managing partner of Sutton Hall Farms. His parents, Arthur and Alice Sclater, started to take farms in hand back in the 1950s and it was they who, with their manager Paddy Cumberlege, created the farming business that has gone from strength to strength in recent years.

John is quick to acknowledge that James and Ruth Wallis are, to him, what Paddy Cumberlege was to his parents – “all-important”.

At one time there were four dairies on the estate, although, as Ruth Wallis explained, there was never one at Double Barns. When John’s parents and Paddy retired, the Sclater Estate herd dwindled to just one. From 2010, though, with James Wallis now contract farming the land, John began to build the herd back up.
Before the recent expansion, the estate had a 210 strong herd at Beaks Farm, Barcombe, and a further 300 cow unit at High House Farm in Chailey, following an extensive modernisation of that facility a few years back. The two units together provided around four million litres of milk a year.

The estate land is grade III and so the policy is to operate the business on a ‘medium inputs, medium outputs’ system devised with support from dairy consultant Kay Carslaw.

“We operate an autumn block calving system which makes the most of summer grazing and silage,” explained Ruth.

“When dairy farming was under pressure, we looked at our costs, made a number of efficiencies and negotiated a contract with ARLA, which has been very useful. It makes a big difference having a good milk buyer behind us. They aren’t the highest paying but they aren’t the lowest, and they have been very supportive.
“We have also negotiated an undertaking from the cooperative to buy the milk from the new facility at Double Barns Farm, which was a major help in allowing us to take forward this latest expansion.

“This is hungry ground; it needs livestock and so we were determined to come up with a successful system that would make the best use of the soil while allowing us to produce milk. We breed for longevity and we are also careful to select calm, friendly animals.

“Once we realised that the combination of the future grant situation and the need to keep livestock on the land was pushing us towards dairy, we looked at the options and decided that the best site was Double Barns Farm, where we already had two general purpose buildings. That choice also meant we could put an area of poor arable land into grass to give us a good grazing block.”

The unit includes housing for 300 cows and a hi-tech milking parlour which includes an electronic sorting gate to allow herd manager Matthew Hill to separate a cow for AI or veterinary purposes.

The cattle housing was supplied by Farmplus, which prides itself on an impressive design that focuses on the best possible airflow for the cattle and which Ruth said the animals at Sclater Estates “really seem to appreciate”.

The draught-free, naturally ventilated housing has been developed by the Lancashire company over the past 30 years, with business owner Jim Rogerson convinced that the best way to house cattle is to provide them with just the kind of shelter they would seek out when left to their own devices.

As Jim Rogerson explained: “Animals out in the open will always look for nature’s shelters, just like humans do. They use hedges, walls and natural hollows to get out of or reduce the impact of the wind. Likewise, they use trees for shade.

“So, when we design our buildings we stick to the basic principles of nature. All animals want shelter from the wind and rain, shade from the sun and plenty of fresh air. Air movements ideally want to be above animal height so as not to create a draught, and we recognise that ventilation is more than just volume of air in a building, it is the rate of air exchange.

“All animals need a shelter wall to be able to lie behind with a decent air gap above for air to pass over, and depending on the height of the wall, the gap above may need some wind break material above it to break wind speed on bad days.”

As well as comfortable and well ventilated housing, the Holstein/Friesian crosses at Double Barns Farm enjoy 24-hour easy access to a self-feed silage clamp during the winter.

As part of the business’ ongoing commitment to reducing its carbon output, the new facility incorporates eco-friendly variable flow milk pumps, heat recovery units that heat the dairy wash down water while cooling the milk and other state-of-the-art features to lessen the farm’s reliance on purchased energy.

The estate made the most of the natural features of the site, which is a mixture of heavy clay and sandstone. “It was carefully planned so that we could dig the lagoon in the clay soil to keep costs down and then install the buildings on the sandstone, again making the most of our natural advantages,” said Ruth.

Three new jobs have been created at Double Barns Farm as part of the venture, taking the estate’s total number of employees to 15 full and part time staff, plus several contractors. The business expects its annual turnover to be about £3 million following the investment in the new dairy unit.

The new staff include Herd Manager Matthew Hill and his assistant Alfie Dalloway, together with help for relief milking across the three dairies and help with youngstock rearing. The new herd has been in production since 18 October, with yields so far in line with expectations at 7,500 litres. James Wallis commented: “We are breeding for solids rather than yield and we are very pleased with the butter fat and protein we have achieved.”

The Sclater family has been supported by the AMC over the past 50 years, with the corporation financing a number of past investments.

Jon Drew, Regional Agriculture Manager for the South East, AMC, said: “The UK is one of the leading milk-producing nations in the world, and sustainable farming methods have never been more important. Double Barns Farm is blessed with light and sandy soils, which are ideal for early entry to spring grazing of cows as well as later return to winter housing. This is a key factor in animal welfare, and this helps the farm to produce exceptional quality products.

“Supporting ambitious land-based projects like Double Barns Farm as they grow and innovate is part of AMC’s DNA. We are working with farms right across the country, providing long-term lending to help implement more sustainable business models and operations and to pursue clean growth opportunities.”

Ruth Wallis said the investment represented “an important milestone in the development of our farm, and forms part of our ongoing journey to be a leader in responsible, regenerative and ethical farming.

“Our existing two milking units were close to capacity, and we’d have struggled to grow without this third site. We simply wouldn’t have been able to carry through this venture without the support of AMC. The new state-of-the-art facility will not only allow us to increase capacity and efficiency, but it also has a positive environmental impact, allowing us to cut the use of artificial fertiliser and replace it with organic material from our own, larger, herd.”

Following the 1987 great storm, John Sclater accelerated a long-term planting programme that has added about 250,000 oak trees to the local countryside, giving him an impressive knowledge of forestry. That knowledge inspired him to research the business benefits of growing Christmas trees, again not least because he knew there were no grants to lose. Other areas of planting include about 1,500 cricket bat willows.

With 225 acres of land at Isfield to the east of the River Ouse unsuitable for dairy use because of poor access and too ravaged by deer to be put down to arable, the estate fenced that area and began to use it for premium, well-shaped trees which will be sold through a new venture, Infinity Christmas Trees, that will supply other outlets as well as their own seasonal store at Gipps Farm.

While the trees won’t be ready for three or four years, the Christmas shop opened in 2018 to build up market demand and has already proved successful selling decorations and locally sourced trees.

Ruth added that with the estate continually looking for new opportunities, the team will be keeping a close eye on the Environmental Land Management scheme when details are known, with the enterprise underpinned by the dairy business.