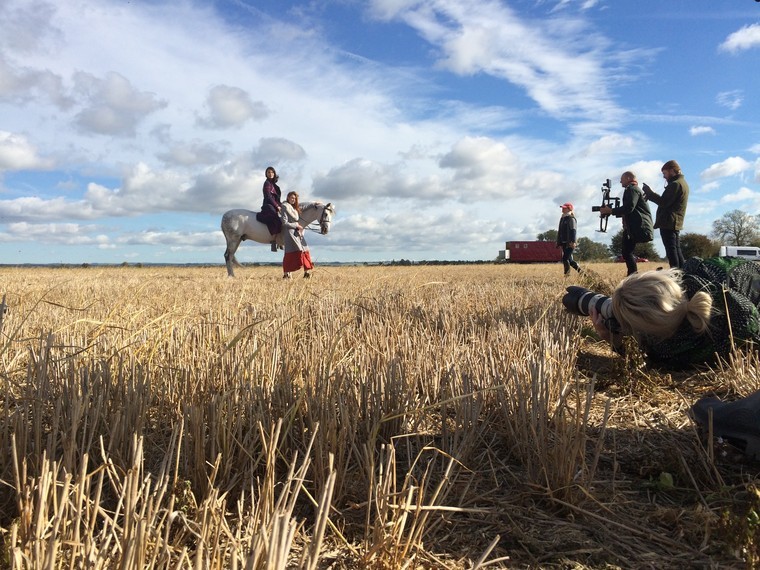 Catching up with Kent-based farm owner Hugh Goldsworthy and Jo Thompson from film location agency, Farm Locations, I was able to learn more about this small but growing sector.

Hugh, who also runs agricultural and landscaping contract firm CMF Contracts, and Jo are keen to stress that using your farm as a shoot location isn’t a guaranteed diversification initiative but unlike many other diversification routes there is a very low cost to entry. So while it’s unlikely you’ll be able to give up the day job – hosting film crews and photo shoots can be a useful additional income.

Hugh’s 50-acre farm is located in the village of Farningham, in Kent near Sevenoaks. His main enterprise is CMF Contracts – a specialist agricultural and landscaping business, employing one full-time member of staff. He is also the chairman of RAMSAK, a farming and rural co-operative and co-founder of the Viti-Culture show.

As a sideline, Hugh got into using his farm as a location for film shoots about 15 years ago.

“A film crew were in our village shooting a documentary on World War One – they needed a location where they could dig several hundred feet of trenches and it all started from there,” he said.

Since then Hugh and his wife Nesta have hosted various decent sized feature films and documentary projects on their farm, as well as a number of smaller photography shoots.

The largest recent shoot was for a murder mystery series for the US. Hugh told me: “That shoot involved around 150 crew members and a huge entourage of lorries, catering, make up, dressing rooms and living trailers.

“Being a good farm location all depends on; location (filming in the locality could lead any farm to be an additional location), how close the farm is to where a film production company is based, suitability of access to your farm particularly to larger crew bases, a space as clean as possible to park up large numbers of cars, vans and artic lorries. Other factors for the smaller one day shoots are having good quality areas for models to change along with a kitchen and nice toilets.”

He adds: “Of course the farm has to be of interest for whatever backdrop is required by a photographer or crew.”

Though he says it’s not worth guessing what they need – just offer what you have. “For the bigger shoots it’s amazing how the props can make a big difference to a space and photographers seem to always gravitate to the least likely area you’d think to take photos.”

Illustrating this point Hugh says: “We recently had a one day fashion shoot for an international designer with the girls who were modelling the spring collection, one of their favourite areas to shoot on the morning walk around was the ‘nice hill’ at the edge of the field that had some atmospheric steam arising from it, the dung heap was duly used even after it was pointed out what it was.”

Hugh views the income generated from the shoots as a bonus – “we don’t rely on the income but it’s welcome when it comes and has been an incentive to improve our buildings to serve as multipurpose facilities for the farm and any crews that may wish to use the farm as a location.”

Jo Thompson is the founder of Farm Locations, a niche locations agency specialising in British farms and the outdoors. Jo, herself a farmer’s wife with a background in media, launched the business in 2015 while piloting the concept with a small group of Kent farms on the Romney Marsh.

With over 50 farms across the South East signed up to www.farmlocations.co.uk the portfolio continues to grow organically, and the emphasis now is to expand further around the M25.

“The majority of clients are based in London which is why farms within an hour’s drive of the centre have an immediate advantage,” says Jo.

The weaker pound is fuelling the growth of filming in the UK – production studios are finding it hard to cope with the demand. Plus, ‘the English countryside look’ continues to be a draw for International brands and Jo has had clients from as far away as Tatler Hong Kong, Vogue Middle East and Japan. Lulu Japan, a high-end arty magazine wanted a farm with alpacas and horses, within easy reach of a central London location – they subsequently booked Hugh’s farm in Kent.

I ask what farmers can expect on average for a shoot or film day. “It can vary from £400 for a low budget shoot to £3000 per day for a major feature film,” says Jo. “So many factors can play a part in the final hire fee.” Jo liaises between client and the farmer, handling price negotiation and contract agreement.

Owners who are open to being more involved on shoot day, can find they can add further income to the base hire fee. “Some crews have stayed on location overnight. Owners who can provide the catering are appreciated, and if animals are required in shot, typically I’ll negotiate an additional handling fee. This can also expand to any additional time the farmer may be needed for other extra tasks: such as moving bales, transporting props, or being on stand-by for towing vehicles out of fields.

Not every enquiry leads to a booking. It can be as many as ten enquiries for every booking, and there can be quite a bit of to-ing and fro-ing before a booking is made.
Being super film-friendly is important – so to have good access and plenty of hardstanding is important especially for the larger productions. Also aim to offer a crew base, including warm rest space, loo, kitchen and good light for hair and make up.

Public liability insurance is key, and make sure your insurance provider is aware of your diversification plans. You may need to inform them each time you host a shoot – different scales of shoots, with or without celebrities, all need to be covered.
Challenges and the benefits of working with an agency

As is often the case in farming, the weather plays its part on shoot days and forward planning and flexibility between the client and farmer is key. Jo says that in her experience there have been very few postponements – even on a heavily wet day, crews can often make an indoor venue work, switching from outdoors to a house or outbuildings.

Another important factor is “eliminating surprises – which is where I come in,” says Jo.

“If the farmer expects 20 people to turn up on the farm, and 100 arrive, it can cause tension.”

Similarly with timescales – crews can often push their luck with extending hours on the day. Jo normally builds in an overtime rate into the contracts for clients and her facilitation role ensures that the best deal and the smoothest process happen.
While popular farm backdrops often come down to a rustic farm vibe or a natural outdoor look, the range of requests is extraordinary – so it’s important as an owner to ensure everything is photographed when promoting the farm location. And it’s not always the pretty look that’s being sought – dilapidated houses, ugly concrete shelters, quarry pits, apocalyptic terrain are just a few of what might get you a booking.