Knowing the origin of every potato sold - South East Farmer 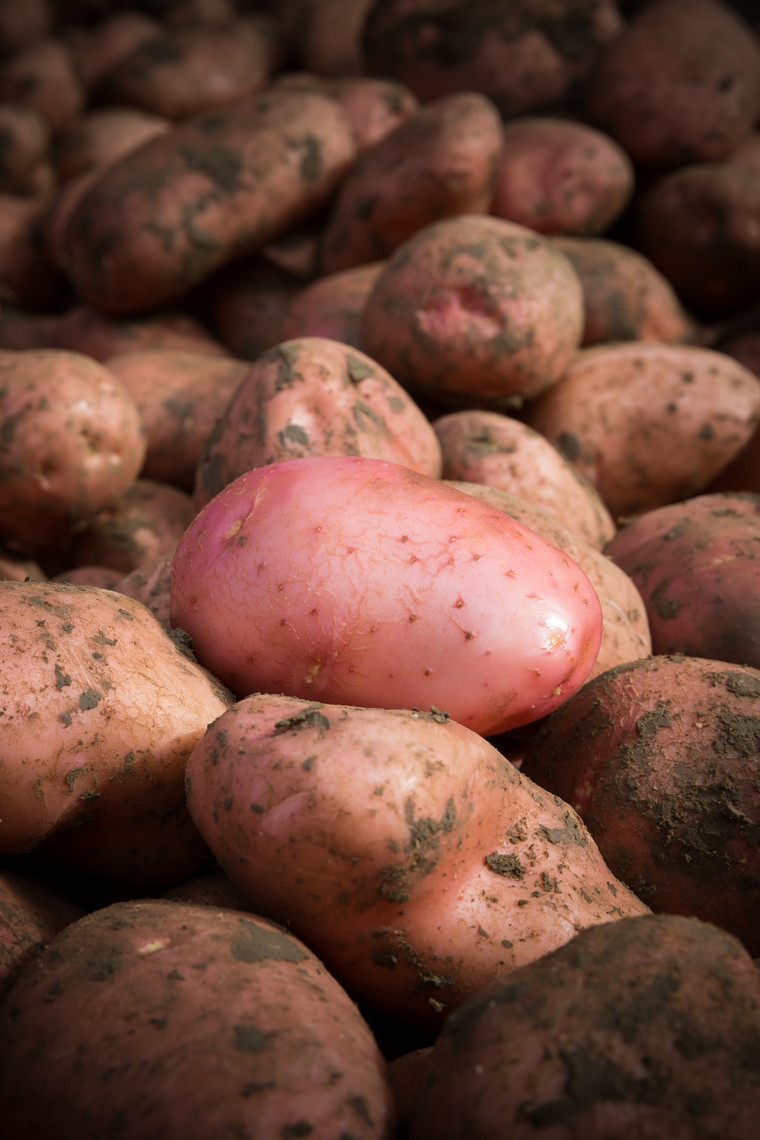 It was a desire to highlight the origins – the provenance – of the potatoes grown around the area that inspired Tracy Bush, one half of the company, to come up with the name, one that is now increasingly well known in farm shops, wholesale markets and catering outlets in the South East.

While Tesco is still a prominent end customer for many of the 10,000-plus tonnes sold through Provenance Potatoes each year, others are sold closer to home, with Tracy using her marketing expertise and industry background to find a home for every last spud dug up in the fields of East Kent.

The company’s boast is that they know the origin of every potato they sell. Each of the 1 or 1.2 tonne bins used for storing harvested potatoes is carefully labelled, highlighting not just the name of the grower but the field the crop came from.

The seed will have been chosen in collaboration with Graeme Skinner, the other half of the Provenance Potatoes team. While Tracy takes care of the marketing and finds a home for the crop, Graeme provides the year-round technical and agronomy advice that makes sure there is a good crop to sell.

That in itself makes a great team, but the combination of the Provenance team and the growers that sell through the business takes that teamwork a step further, creating a formidable marketing organisation for Kent potatoes.

It’s something the growers certainly appreciate. Philip Smith, who produces around 3,000 tonnes of potatoes a year, about half of those at Monkton Court Farm, was keen to stress the value that he felt Provenance Potatoes brought to the deal. “We are incredibly lucky to have Tracy and Graeme working so hard for a comparatively small group of farmers,” he said. “They make a huge difference to us, both in the advice they provide and then in finding a home for the crop.”

It seems a point of pride to Tracy to find a buyer for every last potato, however small or mis-shapen. One new contract has seen Provenance Potatoes used by the county’s school dinner service, and her flexibility helped the business ride the storm when the Covid-19 lockdown closed food service outlets – including chip shops – virtually overnight.

As restaurants closed, so home deliveries expanded, and as the exclusive supplier of potatoes to high end frozen meal supplier Cook, based in Sittingbourne, Provenance Potatoes were in demand to help that company keep up with an increasingly healthy order book.

The latest marketing initiative is to make Provenance Potatoes available in 2Kg plastic bags, to broaden their appeal through independent retailers, farm shops and veg delivery services. Until now they have only been available in larger paper sacks, but with potential customers increasingly asking for Provenance Potatoes in a handier size, the company has now invested in the equipment necessary to meet that demand.

Both Graeme and Tracy gained much of their experience working for St Nicholas Court Farms, previously the main buyer and seller for potatoes grown in East Kent, including those produced by the farmers who now supply Provenance Potatoes.

When St Nicholas Court Farms’ pack house was sold to another packer and began to focus uniquely on supplying one large supermarket, both the local team and the growers became uneasy about the risks involved in having ‘all their eggs in one basket’.

Tracy, then general manager of the company, was particularly dismayed at the loss of any connection between the grower and the end user. “My belief in local provenance was as strong then as it is now, and that was in danger of disappearing,” she recalled.

Graeme, too, felt that the business was going in a different direction, and not one that he was enjoying being part of. The growers, meanwhile, were equally uneasy, so they asked Tracy to set up on her own in 2012. She was joined soon afterwards by Graeme.

“We felt at the time that it was risky growing for one packhouse supplying one supermarket,” said Philip. “Provenance does things differently and supplies a much broader market.”

It may have been foresight, or just good fortune, but the creation of Provenance Potatoes was followed by The Kent Potato Company winding down its potato business, but by now the new company had found its feet and it has continued to grow since then. It sold 6,000 tonnes in 2012 and had its best year to date in 2017, when it hit 11,500 tonnes.

Tracy based the new company at Grange Farm, Deal, where the Solley family agreed she could use their washing plant and packhouse and where Provenance Potatoes is still based. In 2012 she still sold 80% of the produce to supermarket packers and the rest more locally, to wholesalers and other outlets.

That proportion has steadily shifted as Tracy has found new buyers for the six or seven growers who supply Provenance Potatoes. “Tesco is still a big customer and we also indirectly supply the likes of Asda, Sainsbury’s, Waitrose, Aldi and Lidl, but that only accounts for 40% of our potatoes,” she said. “The other 60% is sold locally.”

While Philip is quick to highlight the value added by Tracy and Graeme, the feeling is clearly mutual. “It’s amazing to work with such a committed and dedicated group of growers,” said Tracy. “They show a lot of trust and a great deal of passion.”

For Philip, the future of Provenance Potatoes was an important issue when a fire destroyed the potato store at Monkton Court a month before harvest in 2016.

“I had no store, no boxes and a crop in the ground,” he recalled. “It was not a great situation to be in. Philip managed to get hold of the storage boxes he needed and find some space in a store to rent while making plans for a new, modern storage facility to replace the original building.

Uppermost in his mind, though, was the future of the marketing group, which by then had only been established a few years. One of his calls was to Tracy, just to check that if he invested in new stores there would continue to be a buyer for his produce. She was able to reassure him, and three years later he’s glad he made the right decision. “It was a risk, but I’m delighted with the way it turned out,” he said.

The new stores, four in all, were built by Crop Systems, which Philip said did an excellent job in having the facility up and running ready for the 2017 harvest. The three larger stores together hold 3,200 tonnes of potatoes in 1.2 tonne boxes, while the fourth store is used for seed earlier in the year but can also hold another 300 tonnes and is sometimes rented out to neighbouring farms on a temporary basis.

“Crop Systems did an impressive job getting the store ready on time and it’s a well-designed and built facility,” Philip said. “It wasn’t an easy task, but they got it done on time and I now have a modern, accessible store.”

The controlled atmosphere stores allow the potatoes to be brought down to a temperature of 3°C within ten days and then kept chilled for up to a year if necessary. The potatoes are kept in 98% humidity, while an automatic system also constantly monitors the CO2 levels and can flush the store with oxygen from outside the building if that gets too high.

The stores use a secondary refrigeration system which uses glycol but can suck in outside air if the temperature falls far enough. “And it can all be monitored and controlled by an app on my phone,” Philip added.

Philip is the third generation of the family to run the farm at Monkton. His grandfather Herbert established a 1,000-acre mixed farm on the land at the end of the 19th century and was followed by his son Michael, who added turkeys to the mix.

Philip took over in 1976 at about the time the farm moved out of livestock. He continued with arable and added potatoes, a business plan that continues to this day, and now grows 300ha of arable crops and 60ha of potatoes, which are split between the Monkton farm and other land nearby.

St Nicholas Court Farms carry out the work on the arable area, while contractor Jeremy McCabe supports the potato side of the business and has been instrumental with Graeme in improving yield and quality.

The three- to four-week harvest period normally begins in early September, with a Grimme GT harvester doing the digging. “Our aim is always to get them in quickly so that we can get them dry and cooled down to storage temperature,” he said.

Because Philip’s store is so efficient, Tracy tends to hold those potatoes back while finding new and varied markets for those from neighbouring farms with a shorter shelf life. Those markets include the Canary Islands, which buys the company’s undersized King Edwards to use in Tapas dishes.

“Our aim is to find new markets, add value, reduce waste and work closely with our growers to get maximum value for our crop,” she explained. Graeme, meanwhile, is on hand throughout the year, not just advising on seed choice but on inputs, irrigation and the other factors that help create a good crop.

The former technical manager at St Nicholas Court Farms is also keen to stress the environmental changes that the group’s farmers are making with his support. Growers on lighter land no longer plough ahead of potatoes, but instead use tines to avoid turning over the soil and losing carbon as well as moisture.

“Graeme’s advice is vital,” said Philip. “From the choice of seed, preparing the ground and looking after the growing crop, right through to harvesting and storage, the growers in the group really benefit from his support. The combination of Provenance Potatoes’ expertise and the skills of the farmers they work with really has created something special.”