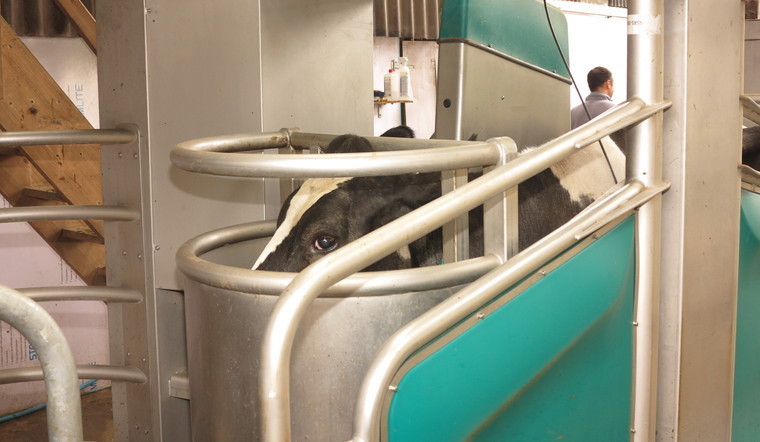 Dairy farmer Suzanne Owen may not have to get up before dawn to milk her cows these days, but she nonetheless feels closer to them than ever before.

Although her two new robotic milkers have taken away the hard graft of early morning starts, they haven’t reduced the time she spends with the 120-strong herd. “If anything, I spend more time with the cows, but it’s a more constructive relationship,” she said.

“Before I was just standing in a cold, damp pit looking up at their feet and udders while milking twice a day. Now I spend time looking for the odd cow who hasn’t yet visited the milker or I check up on an animal if the app on my phone suggests there might be an issue. It’s a much better use of my time and it’s better for the cows, too.”

“The new system is working really well, although it’s been a steep learning curve and I reckon we will still be learning about the finer points for at least another year,” she explained. “The technology does far more than I realised.

“I thought we were buying two robots that milked cows. I had no idea quite how sophisticated the system was and just how much it could do to improve things both for us and for the cows.

“The system is much better for the environment and for the cattle because the computer monitors the milk from each individual cow. If there is any sign of a problem with the milk, it is automatically dumped and the computer alerts me to the issue via an app on my phone.

“The neck collars also monitor how much each cow is eating and their activity, and again, if it varies by more than a small amount, we receive an automatic alert and can investigate. It’s so much better for the cow’s health as it doesn’t rely on us spotting one issue amongst 120 cows, and it cuts down on unnecessary antibiotic use, which is better for everyone.” Foot health has also improved, since the cattle no longer have to stand around on the uneven concrete of a collecting yard.

Philip Bridges, co-director of suppliers Negus Chase, said the sophisticated system allowed the cows to visit whenever they wanted to, although it would not milk an animal before a suitable, pre-set amount of time had elapsed. “Because the cattle don’t have to wait to be milked, the yard is much quieter, too,” he said.

The decision to switch to robotic milking was a family one, with significant input from Suzanne’s son Greg Wood, currently in the last year of a degree course in agricultural engineering from Harper Adams University, as well as from her other sons Timothy and Douglas.

As a next generation dairy farmer in the making, Greg shared his knowledge of the latest technology and pointed out that as things stood currently in the dairy world, farmers either had to “invest or sell up”.

Greg said the family had been breeding cows for robots for the past seven or eight years to make sure that they had the right udder shape and teat spacing for the automated system. As a result, the farm had not had a single problem with the herd hooking up to the equipment, he said.

“We have saved a lot of time, got rid of the early morning starts, improved life for the cows and introduced a more sophisticated monitoring system,” concluded Suzanne. “All told it was a great decision and I am sure we will continue to find useful new features as we get to understand it fully.”

The switch to the robotic system was a challenge for renowned refrigeration specialist John Haffenden, who was left with just seven or eight hours to connect up the re-sited bulk milk tank and refrigeration equipment between the morning and evening milkings.

“We had done lots of preparatory work, but it was still a bit of a race against time on the day,” said John, managing director of Freshcold Ltd. “I’ve worked for Suzanne for many years and I was glad to be part of the farm’s shift to a new and more efficient way of doing things.”