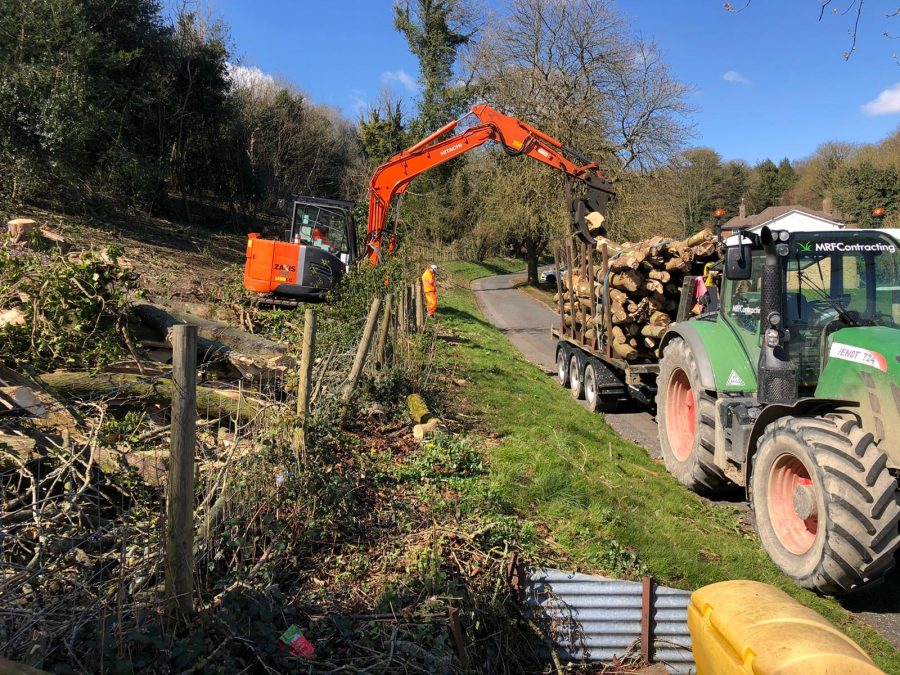 Archie Montgomery knows that having the right equipment plays a vital part in delivering the best possible service to the many landowners, farmers and countryside organisations who rely on MRF Contracting for landscaping, tree and scrub clearance and fencing work.

His impressive line-up of machinery, which includes robotic flails, remote controlled tracked post knockers, heavy duty mulchers and tree shears that need a 22-tonne excavator to power them, is matched by the bespoke software he uses to run the business.

“It’s all on the computer and sent to team members on their mobile phones at the start of each day,” he responded when asked how he keeps tabs on which of his 20-strong team is doing what, where, at any point in time.

“It’s an off-the-shelf package but we have tweaked it so that everyone knows precisely what they are doing. All they need to do each morning is look at their phone,” he said with the relaxed air of someone tasked with buying a round of drinks for a handful of friends.

It is perhaps not surprising that Archie has developed first class organisational skills, given that he also manages the 450 acres that make up Monkton Road Farm at Birchington and provides contract farming services, specialising in spraying. He’s also a keen kite surfer, something he managed to squeeze in on Christmas Day last year.

MRF Contracting, which offers ecological, arboricultural and landscaping services across the South East, has developed an impressive reputation for the quality of its workmanship, based not just on the equipment it runs but on its well-trained and highly qualified team. “We have high standards, but those who make the grade tend to progress through the company and become team leaders,” he said.

While it has probably the best array of landscaping machinery in the South East, the team also tackles smaller jobs for local farmers, particularly when it comes to thinning or removing trees. “We can provide a climbing crew to take out one dead tree or we can cut back a whole row of poplars,” Archie explained.

The company also buys stands of timber, which it either supplies as wood chip to a power plant in Sandwich or, in the case of better quality hardwood, turns into planks for furniture or other uses.

“To be honest we will remove the odd one or two trees, perhaps because they are dangerous, without charge,” he said. “For larger areas we will agree a payment for the wood.”

Fencing is another important part of MRF Contracting’s range of services and is something the company is demonstrably skilled at providing. The team provided 44 kilometres of double fencing strong enough to contain the five bison recently introduced by Kent Wildlife Trust at West Blean and Thornden Woods, near Canterbury.

“We were proud to be asked to support Kent Wildlife Trust in this exciting project,” said Archie. “We cleared six metres of undergrowth before installing the fencing, which clearly had to be of a high standard to protect the bison and, of course, visitors to the woods.”

MRF Contracting has developed an impressive reputation for its work with wildlife organisations and was praised for its help in creating 1.6 kilometres of meander for the RSPB’s groundbreaking Sarre Penn restoration project, again in Kent.

It’s a skill that could prove to be valuable to farmers and landowners across the South East as the introduction of the Environmental Land Management scheme and the phasing out of basic payments creates opportunities for wildlife schemes to be introduced across the region.

“Planting wildflowers is not just a question of scattering a bit of seed around, as anyone who has tried to do it themselves well knows,” Archie explained. “Clearing scrubland and creating wetland areas or wildflower meadows takes care, experience and the right equipment.

“We have machinery such as robotic flails, which have a much lower impact on wildlife sites than other equipment and can be used on steeply sloping sites, and we have a vast amount of experience that can help farmers take advantage of the new funding schemes on offer.” The company also planted 45,000 trees last year and carries out hedge cutting.

Archie’s grandfather Robert was the first member of the family to farm at Monkton Road, while his son, also called Robert, grew cauliflowers on the land, which is now exclusively used for arable crops.

Archie set up MRF Contracting in 2007, having obtained a Diploma in Agriculture from the Royal Agricultural University in Cirencester and worked as a tree surgeon and shepherd in Denmark, Sweden and Wales before working for a land agency and becoming an associate of the Royal Institution of Chartered Surveyors.

The business operates a Fendt 724 and a Fendt 933 reverse drive tractors, a New Holland T7 and a Case 110 Quantum designed for narrower rows. It has three set of tree shears mounted on excavators from five to 22 tonnes and forestry flails powered by eight to 22 tonne machines.

“I am confident we have the best kit around – and a team with the knowledge and experience to use it,” Archie added.