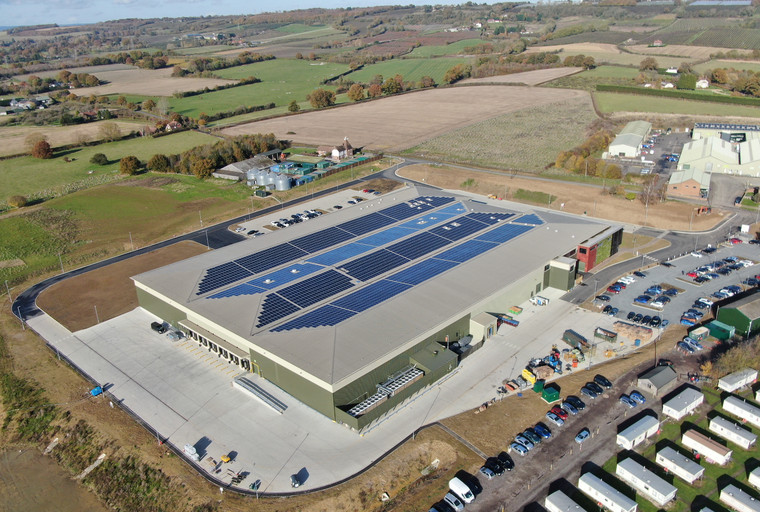 There are few landlords who would allow the incoming tenant to drill more than 30,000 holes in the roof of a brand new building immediately after it’s been finished, but that was just one of many examples of close co-operation during the construction of Berry Gardens’ impressive new headquarters in Redwall Lane, Linton.

On paper, the scheme to provide a new 200,000 sq ft chilled store, packhouse and office accommodation for the growers’ co-operative looked far from straightforward. Main contractor Civils Contracting Ltd was asked to design and build both the shell for the landlord and the extensive fit-out for the client at the same time, while project manager Page Surveyors was engaged by both landlord and client.

Planning permission was never going to be easy either, given that, in the words of project manager Duncan Pierce, “it’s a building you can almost see from space sat in a green field just below the Greensand Ridge”.

But despite the challenges – including the holes to allow BeBa Energy UK to provide a groundbreaking, one Megawatt solar PV system on the brand new roof – the state-of-the-art building was finished early and handed over on time and on budget.

As Duncan Pierce explained: “The co-operation and the give-and-take was extraordinary. From that point of view this was a dream project from start to finish, and in my view is an example of how things should be done.”

Paul Medhurst, Managing Director and joint owner of Civils Contracting, which came in for particular praise from Duncan, agreed with the verdict. “We smiled at the start of the project and we were still smiling when we finished,” he said. “The contract stayed in the drawer – I don’t think anyone even looked at it, as nobody raised any issues throughout the progress of the job.”

The planners were smiling, too, thanks to some win-win value engineering by Civils at the start of the process. “This was a big building on greenbelt land on a hill,” Paul explained. “We realised that by dropping the building another five or six metres into the ground, we could lower its profile significantly to considerably reduce its impact on the landscape.

“At the same time, we used specialist techniques to engineer the spoil we took out and turn it into suitable foundation material that we could re-use for the building, essentially equalising the cut and the fill,” he explained.

“In essence we use a big cake mixer and add the right ingredients to the spoil to mix it up before compacting it, spreading it and testing it. It’s a highly specialised approach that involves lots of laboratory testing but has a number of advantages.

“It meant we didn’t saturate Redwall Lane with lorries taking spoil away or with other lorries bringing in the new material we would otherwise have needed. It also meant we didn’t send anything to landfill or quarry anything out of the ground, which is environmentally a much better approach.”

As well as encouraging Maidstone Borough Council planners to back the scheme, roughly halving vehicle movements and protecting the environment, dropping the building into the ground in this way knocked around 10% off the cost of the shell, saving Alan Firmin something like £1 million, Paul said.

It wasn’t only the foundations of the building that involved ‘chemistry’, in Paul’s view. The success of the complex project itself relied on “a real chemistry between all those involved – the landowners, planners, architects, contractors, specialist sub-contractors, client and everyone else who played a part”.

That chemistry produced a new building that has more than impressed Berry Gardens CEO Nick Allen, who first put the idea forward in 2015, when he was Financial Director of the company, then based across the road from the new building at Ware’s Farm.
“Business was booming as part of an upturn in soft fruit, with 10% to 15% growth year on year, and so I knew we would be at capacity within two or three years. We were in an old building that had been developed and expanded in piecemeal fashion and was a bit of a rabbit warren.

“It was inefficient, the technology was outdated, particularly in terms of the cold storage, and so we knew we needed to up our game and create a purpose-built new facility that would allow us to streamline our processes,” Nick said.

The other issue was that the head office team, including the marketing, accounts and other support staff, were all based in a different office in Tatlingbury Oast, Five Oak Green, which the company knew was far from ideal in terms of building team spirit.

A few short years later, and having recently been appointed CEO, Nick looked back on a successful project that had delivered a high-tech, energy efficient building, streamlined production and brought the entire team under one, solar PV-covered route.

“It’s amazing that we held a leaving do for Nicholas (former CEO Nicholas Marston) on this very spot in 2017 and now we are sitting here in a brand new, purpose-built facility that has exceeded all our expectations,” he said.

Bringing the team together has been hugely successful. “It’s boosted communications across the team, got everybody engaged and resulted in the non-operational staff becoming far more passionate about fruit, something that was, to them, previously just a product,” said Nick. “If you can generate an emotional attachment to what you are selling, it can transform the business, and that’s what has been happening since the team came together at the end of 2019.”

After looking at a number of sites and exploring many options, the company found themselves back where they started, looking at a green field site owned by Alan Firmin Ltd opposite their existing base.

“It had a number of advantages,” Nick explained. “We already had good transport links and we were close to our growers, which allows us to rapidly cool fruit soon after it has been picked. Our import supply chain routes are good and as a farming co-operative we wanted to stay in a rural area rather than on an industrial estate, which simply wouldn’t have worked for us.

“Naturally it took a while to get planning permission, but once the building was redesigned to give it a lower profile, Maidstone Council proved supportive. It is highly rated from an environmental point of view, we have one MW of solar PV on the roof, a biodiversity site behind the building and two ‘green walls’.”

Berry Gardens Supply Chain Director Duncan Mills added: “We organise litter sweeps with Linton Parish Council, we’ve invited local people to visit and there is more landscaping to come. Alan Firmin Ltd, our landlord, is committed to planting thousands of trees on the site and we will soon be even less visible.”

Duncan recalled that when parish council chairman Bernard Cresswell first visited the company to talk about the plans, he told them: “We want you to disappear”. “He wasn’t being rude,” Duncan explained. “He just wanted the building to have as little visual impact as possible. He has since written a very supportive article about the finished scheme.”

The impressive building, which measures 150 metres by 100 metres and has an additional 4,000 square metres of mezzanine floor space for the office staff alongside new canteen and welfare facilities, is also designed to be ‘zero waste to landfill’.

<a href=”https://issuu.com/kelseygroup/docs/sef07july20_issuu/33>Click here to read the full feature on Berry Gardens