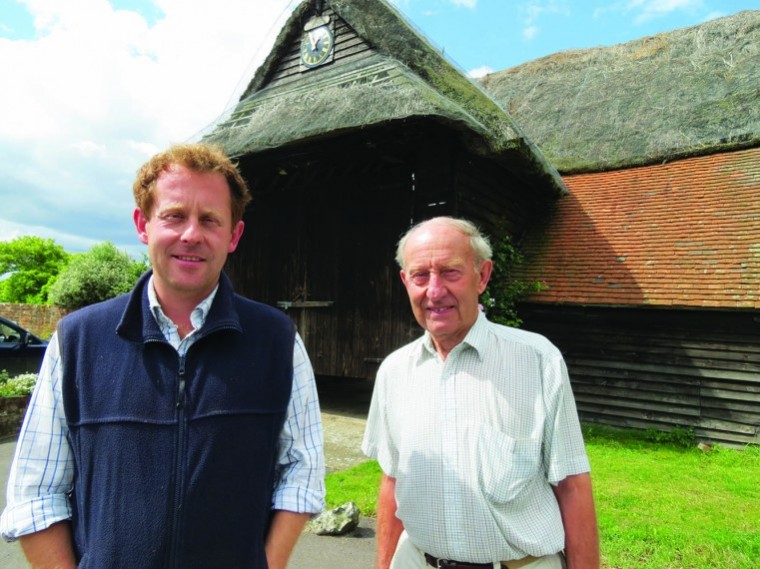 Andrew Randall is the fourth generation at Hyde Farm near Maidenhead in Berkshire where his grandfather went in 1933.

At that time, it was a mixed farm with an emphasis on dairying and particularly retailing milk. “There was a milk round in Maidenhead which carried on into the fifties,” said Mr Randall, who today runs Randall Farms Ltd with his father, Alan.

At some point a herd was taken down to the other farm, Temple Park – the two are cut in half by the A404 dual carriageway – until dairying ended in 2002 just after foot and mouth.

“It was a high input system relying on all year round feeding,” Mr Randall explained. “Down there near the Thames it is very alluvial with very little grass in the summer – hence the all year round feeding with a big emphasis on maize.” The forage was a bit unreliable and a lot of investment was needed in slurry handling and other parts of the enterprise.

At that point, Andrew Randall was at his first job managing an estate in Scotland after studying agriculture at Newcastle University. He left Newcastle in 1999 and worked in Scotland for almost six years before returning home in 2005. The Scottish estate in Sterling was mixed with a dairy herd and the sheep flock was being dispersed as Mr Randall arrived: there was also about 1,400 acres of arable. The area is wet and marginal for arable crops, and with wheat at about £70 a tonne Mr Randall had to rationalise the business and move into half wheat and half set aside, which made the most sense at the time.

“The appeal of returning home and working for our family’s long term benefit was more than staying up there,” Mr Randall remembered. “Dad and I consulted about whether I had any real ambition to keep the dairying side going but we decided that was not relevant because there were better things to be doing.”

When Alan Randall gave the cows up in 2002, a neighbour approached him to farm about 300 acres. The Randalls have continued to do that on a farm business tenancy basis ever since. “Our acreage for a while was 850 going through the combine,” Andrew Randall said. “We have since picked up some other areas of land so we are now combining just over 1,000 acres.” About 650 acres are owned, about 300 are rented, there are 80 acres of stubble contracting and some other fairly loose agreements on land which are quite short term. “These landowners with small parcels of land are coming slightly unstuck with the new common agricultural policy (CAP) reform proposals,” Mr Randall explained. For example, one landowner has an area which backs on to the land which the Randalls do their stubble contracting on. “Logistically, it is quite convenient for us. But under the CAP rules, he has to have two crops on just under 74 acres and some greening as well. So there is a quandary about how to do that and offer him any rent on it when we have to go up there twice for two different crops on relatively marginal land.”