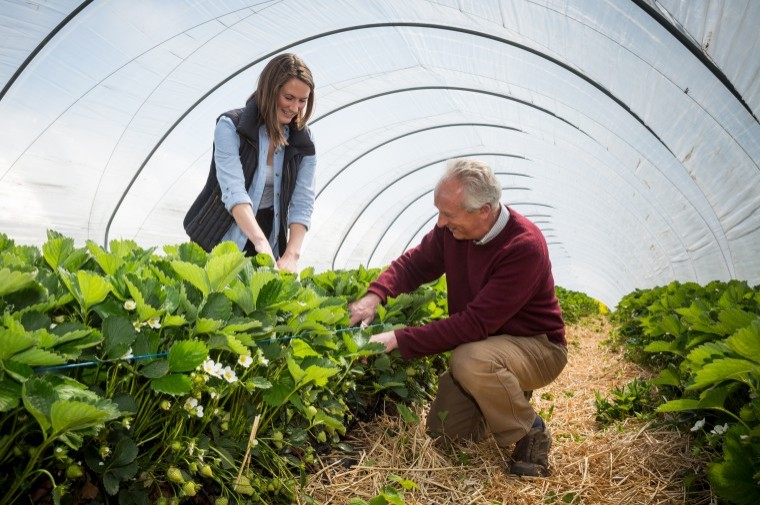 Soft and stone fruit which is simply good to taste has been the mantra of the family who have cultivated Mockbeggar Farm, near Rochester, Kent since 1950.

Today, producers from Mockbeggar Ltd are main suppliers to Marks & Spencer as well as Co-op, Morrisons and Aldi, plus local markets through the Mockbeggar Farm Shop. John Myatt is the fourth generation of the family to farm at Mockbeggar Farm, taking on the land from his mother. John, along with his business partner and wife Kim, set up J Myatt and Co in 1995, growing strawberries at Decoy Farm, 15 miles from where we are sitting, to help with cashflow before turning to longer term crops such as raspberries.

In the 1980s, Mockbeggar Farm rapidly expanded under the management of brothers Simon and Peter Brice. As his uncles retired, John took over more of their crops which included rhubarb and plums as well as the on-site packing plant and producer group Mockbeggar Ltd, which now consists of 10 growers.

John and Kim’s daughter, Alex, 25, started working at the farm during sixth form and university holidays with no initial aims of working within the family business. She would always return to the farm in late spring to pick cherries with her friends with her initial roles funding her travels during the long holidays.

After studying for a degree in sports performance analysis in Cardiff and subsequently securing a role with the Welsh Rugby Union, she quickly realised that jobs within this sector involved too much time sat behind a computer. She returned to the farm and quickly became hooked:

“I became gripped by the business side of things,” she smiles. “Whether that’s on the technical side; training workshops; improving training set ups, walking around the farm with our agronomist every other week, I’m always learning something new.”

Alex built her experience by spending time in the fields, the packing house and the office. As well as learning from her father, she cultivated her knowledge of soft and stone fruits by attending courses on growing apricots and plums.

When the farm’s manager retired, John decided not to replace his position, instead delegating some of the key responsibilities of the role to his daughter – now the fifth generation to farm at Mockbeggar. While Kim manages the office and John looks after the farm’s full time staff, Alex is in charge of the seasonal workforce, who come to Mockbeggar Farm mainly from Romania and Hungary.

“I enjoy working with people from all walks of life, seeing the potential in people and finding out why they are here and what motivates them,” she says. “They may not show their potential straight away but we have seen pickers who are slower in their first season become much faster the following year.”

Alex still makes use of her sporting background, drawing on it to make suggestions for efficiency improvements: “Being from a sports background, you have to be quite critical of how things are going, so I’ll look at aspects such as logistics and ask the question ‘where can we improve?’”

Training new recruits is achieved through watching experienced pickers and watching internet videos of best practice picking. And just like the sporting world, it is important to establish good technique first. “Once they have picked up the skills, they can work on the speed, but that can take a year,” explains Alex.

Picking holds the key to the farm’s key selling point – selecting the very best tasting fruit. For John and Alex, this is achieved through detailed staff training. Alex explains: “We encourage our pickers to eat the fruit and to taste it so they know what a ripe strawberry tastes like in comparison to an orange strawberry, that way they know exactly which are the best fruit to pick in order to get the best quality.”

Soft fruit growing is dependent on having access to labour during the picking season: John says this accounts for between 40-60% of production costs. The Myatts are concerned about the effect Brexit will have on recruitment. Attempts to recruit locally have been unsuccessful, yet many of their seasonal pickers have been coming to the farm from Eastern Europe for five years or more, staying on the farm’s caravan site for between three and six months before returning home.

“They return because they are made to feel welcome here on the farm,” says John. “We cannot get the workforce we need locally, so they are not stopping local people from working here. These are the people who want to come and work here, many are here to earn money so they can build their own house on the family’s plot of land.”
For Alex, the best results come from staff retention, rather than recruitment: “Our pickers come back year after year. As it gets harder and harder to find good people, it makes more sense for us to focus on retaining staff. Seventy-five percent of our workforce return year after year and they also tell their friends and family. We only have to recruit 10 per cent who are unrelated to our existing workforce.”

“We know we are fine for the next two years but Brexit is causing massive uncertainty,” she adds. “The vote has made them unsettled and a few have remarked that they have been treated differently in the town.”

Aside from Brexit, the other single biggest issue for the Myatts is another of the UK’s favourite talking points – the weather. Alex describes the family as “avid weather watchers.” Thanks to a warm Easter, soft fruit crops appear to be ahead of where they were in 2018, when the freezing temperatures of the Beast from the East resulted in a slow start to the growing season.

John says this is particularly noticeable with the blackberry crop, which is already setting green fruit. Within the stone fruit, this year also looks to be further forward with many of the plums look to be setting fruit already, although we are still weeks away from ‘June drop’.

While Alex is continuing to learn about the family business from her father, she also gets ideas from her peers within a networking group – Under 40s Fruit Growers – which is mostly made up of growers from Kent and Herefordshire. The group undertakes educational farm walks and provides a forum for growers to learn from each other about different techniques, their successes and disasters. Alex, who has a committee role within the organisation, has also participated in a fact finding visit to Chile as part of the group.

As the fifth generation to farm at Mockbeggar, she is also keen to bring ideas of her own to the farm. As well as working on different test fan formations for apricot trees, Alex is also keen to develop the website and marketing activities, bolstering the farm’s online presence and letting buyers know more about the produce they are buying.

She is already using social media to keep in touch with her workforce, and uses Facebook to keep in touch with returning seasonal workers, both in Kent and overseas and to help new pickers connect and get to know each other. She also uses the platform for training issues, using images to help familiarise pickers with what is ripe and what is good on the farm.