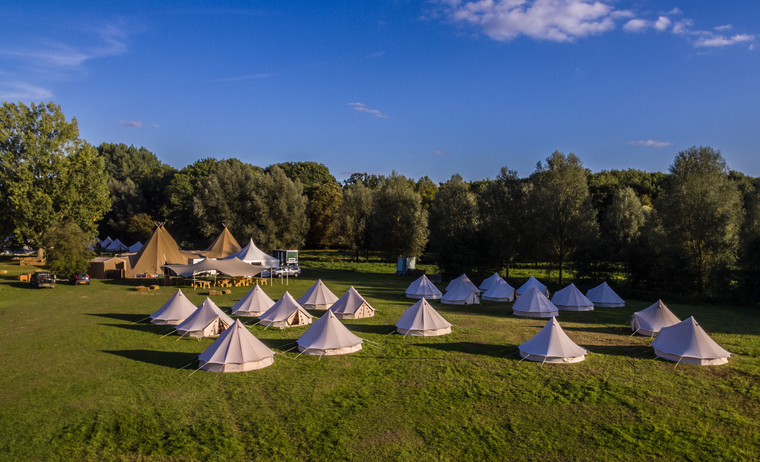 The past few years have seen a massive increase in demand for glamping. The global market size for this sector reached $2.1 billion in 2018 and is projected to grow at 12.5% until 2025. It is no wonder that many UK farmers looking for additional income are taking advantage of this growing trend.

Archie and Nat Browning are no exception, and after leaving university in 2012 they could see a new farm diversification project which they hoped would allow them to earn a living from the family farm working under their own steam.

Tey Brook Farm is a 400-acre organic farm located in the village of Great Tey, just six miles south-west of Colchester, Essex, and is still run by Richard Browning, the fourth generation to farm the land.

The brothers were fortunate enough to be able to utilise a small unused meadow and then expand into woodland on the farm that Richard planted after the devastation of the 1987 hurricane under the Woodland Grant Scheme.

They began with three bell tents, erected over the summer holidays, to see if there was any interest. Their experiment proved to be a success which they largely attribute to the farm’s close proximity to London.

The glamping site, known as Teybrook Orchard, now consists of ten dwellings which include a genuine shepherd’s hut, purchased by their grandfather approximately 70 years ago, and a converted grain silo that was moved from the farmyard to the woodland by Richard as a folly for his own use. Little did he know it would be instrumental in a successful farm diversification enterprise. Additional accommodation includes four Mongolian yurts and bell tents. Bookings can be made through their website www.browningbros.co.uk.

As well as glamping, the brothers were keen to tap into the UK weddings market, a £10 billion industry.

As a side business from the farm, they were hiring out music equipment, luxury mobile toilets and generators for weddings and other private events around the county. After spending many hours delivering and collecting equipment from other venues, the brothers soon considered exploring the possibility of bringing events to the farm.

“We realised that our main asset was the land that our family are lucky enough to own and as a result we came up with the idea of ‘wild weddings’; offering an alternative outdoor space to the abundance of conventional and traditional venues in the county,” said Archie.

“Our weddings also allow couples to celebrate over the course of a weekend, giving them the chance to celebrate with family and friends as opposed to the more conventional wedding which often feels rushed and over too quickly,” he continued.

As an outdoor venue, of course, the brothers know their limits, not least with the weather, and therefore the venue operates between May and September, at which point the site is dismantled and put into storage for winter. This allows time for them to rest and make both new plans and improvements for the forthcoming season.

I asked Archie what he loved best about their business. “I think the most enjoyable part of our business is that we have a blank canvas here to be as creative as we like. We are spoilt to be able to earn a living from the land that we call home and it is exciting to have the opportunity to maximise every aspect of the farm to its optimum potential that works not just financially but in a way that is both sustainable and regenerative,” he replied.

The brothers have two cabins on the lake site which are available to let all year round. The first cabin, Water Lily Lodge, was granted permission in 1987 but not in fact completed until recently, when Archie and Nat felt it would be perfect accommodation for the bridal party from the wedding venue.

The second cabin, Kingfisher’s Nest, was built with the help of Rural Development LEADER funding, which covered 40% of the build cost. It is a contemporary design with a luxury finish inside. They finished building the cabin during lockdown and it has been very popular since, something they attribute to the boom in ‘staycations’ this summer.

Intrigued to learn more about the planning side of their business, I asked Archie what their experience of working with their local council had been.

“On the whole, pretty tough – planning for the glamping site was reasonably straightforward because Great Tey parish council was largely very supportive of our venture.

“In contrast, the planning for the wedding site was very difficult, which was largely a result of issues around noise pollution, and there has been a great deal of blood, sweat and tears obtaining permission for this venture, which was finally won on appeal.”

The brothers are now able to host a total of 12 weddings over the course of the season, with a curfew of 11pm for the music to be switched off.

I ask about the impact of Covid-19. “Losing our weddings this year has had a massive impact on our business, as this is the backbone of the business,” I was told. “With that said, we have been really lucky in the fact that there has been greater demand for the campsite and cabins this summer as fewer people are travelling abroad.

“Unfortunately this has not balanced out the hit we have taken by not hosting larger events. Even smaller group events have mostly been cancelled, and trying to make the campsite and cabins as safe as possible for guests to feel comfortable has been difficult.

“With regards to next year, we are optimistic that we will be hosting all of our weddings and larger events. Obviously safety measures will have to be implemented, but by their nature outdoor weddings/events should be a safer environment for things to get back to normal as soon as possible.”

Since lockdown, sister Meg has also returned to the farm to run retreats, after previously catering for a professional sailing team. This year she has run five yoga retreats, doing the cooking and organising yoga and meditation instructors to come and run three sessions per day. Group sizes are kept to a maximum of 10 and this is something they are planning to push more next year.

In addition, Nat’s fiancée Becky is leaving her job in corporate events in London and joining the business at the end of the year. As the team has grown over the years, Archie and Nat have taken more of an interest in the farming venture as Richard has taken his foot off the pedal.

Hemp has recently been added to the rotation (after the business applied to the Home Office for a licence to grow it) around four years ago.

“It took about eighteen months to obtain consent; you have to give the grid reference of where you want to grow it. It can’t be near a footpath,” Archie said. The family now grows 25 acres. The seed is drilled into a cultivated bed in May. They then combine it in September and the seed is stored on a drying floor at a moisture content of 8% or below.

Most of the seed is sold to a cooperative called Hempen in Oxfordshire, which makes its own hemp products. This year they are also planning to sell the seed to a company called The Bristol Hemp Company, which will process it to make cooking oil and bodycare products (soap and moisturiser) that will then be sold from the farm. The rest of the hemp straw is baled up and processed – splitting the shiv from the fibre. The fibre is used for animal bedding and the shiv for hempcrete.

As well as drying their own hemp seed, they also dry hemp for other growers.

In addition to hemp, Richard grows around 25 acres of quinoa, 100 acres of wheat, 50 acres of barley, 50 acres of borage and 50 acres of grass and clover leys. The rest of the land is made up of woodland and permanent pasture (the water meadows and orchard).

“The farm is in the Countryside Stewardship Higher Level scheme and Organic Entry Level scheme and as part of these we have areas of pollen and nectar strips, wild bird food strips, grass margins and beetle banks within each field. We also have a couple of freedom hives for bees from Bee Kind Hives,” said Archie. More recently Nat has taken up amateur bee-keeping.

“The farm has been organic for nearly 20 years and we are now looking to make the conversion to a mix of biodynamic farming and agro-forestry with a mix of livestock that will be used to graze in the crop rotation,” said Archie.

When Richard’s grandfather came back to the farm before the war he was told it was not big enough and that he would have to create a new enterprise. He chose pig production and made a success of it. History has repeated itself with the latest diversifications.

The piggeries, meanwhile,have been converted to offices and industrial units and a storage business operates from the farm.

A sixteenth century barn has been converted into a successful restaurant, The Barn Brasserie, run by Richard’s sister and brother-in-law.

The future
Archie and his brother Nat are still optimistic that they will be able to host weddings next year. They are also building a more resilient business by constantly evolving and tapping into new trends.

It’s a fascinating model and an inspiration to other family farms looking into diversification. I look forward to following their progress on instagram (@browningbros) over the coming years and maybe staying in one of their quirky dwellings one day.