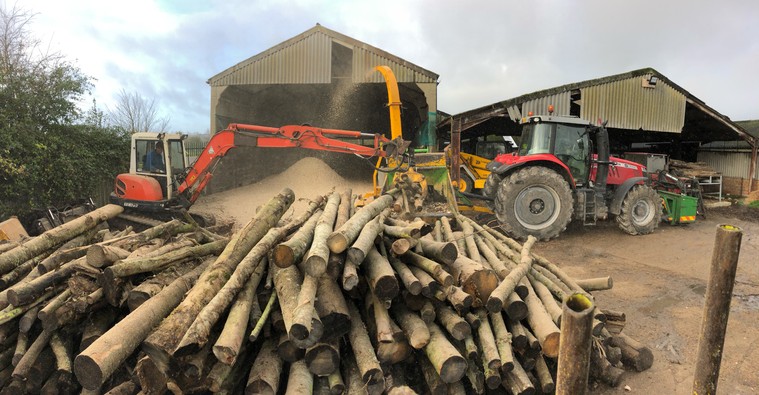 As an established supplier of woodchip for biomass boilers, Josh Penrose knew that the large tree trimmings he saw being burned on a bonfire could be put to a better use.

The Sussex-based contractor saw the wood as a renewable resource and arranged to take it back to his yard for chipping, demonstrating not just his business acumen but his environmental philosophy.

He applies the same thinking to the slurry application side of his business, where his aim is not just to empty the lagoon but to spread the valuable nutrients and trace elements it contains on fields that will gain the most benefit from it.

“Slurry is not a waste product that needs to be got rid of, but a cost-saving, yield-enhancing soil additive,” he commented.

Penrose Contracting, based at Willets Farm, Chiddingly, has grown steadily since 2012 and specialises in forage harvesting as well as in woodchip supply and slurry application. After starting up on his own, Josh now employs up to 14 people during peak periods.

That business growth has benefited from the support of Agrovista’s Ben Thorpe, who has worked closely alongside Josh in a professional relationship the contractor describes as “simply invaluable”.

As Ben explained: “Penrose Contracting carries out a range of contracted services for many of my clients, so it is in their interests for me to support Josh and give him any technical backup he needs. Agrovista has a large, specialist knowledge base to call on, and I am happy to share that knowledge with someone as committed to providing a first class service as Josh clearly is.”

One of the areas where Ben’s advice has been useful has been in carrying out inter-row grass drilling in maize crops within South East water catchments. The aim is to reduce run off of soil and nutrients into watercourses, while also boosting carbon capture, benefiting the land and the water. Josh has also seen improved field worm counts using this practice.

It is a specialist job which needs the right choice of grass which won’t compete with the crop, and needs careful planting at just the right distance from the maize. It’s also critical to sow the grass at exactly the right time.

Josh carries out the work using an adapted combination drill that he conceived and built himself, and has seen impressive results. “Ditches locally are now running clear, proving that less topsoil is reaching the watercourses,” Ben commented.

While the contracting business started, not unusually, with Josh offering a range of arable services such as ground preparation, hedge cutting and drilling, it was only about a year later that he spotted a niche in offering a new approach to slurry removal that focused on the benefits of putting a clearly valuable by-product to the best possible use.

While he started spreading slurry using an umbilical system, Josh has since broadened his approach, again with the aim of offering a more environmentally sound and productive service to farmers.

“Because the umbilical system relies on pumps and on a clear run from the lagoon to the field, you really are limited to spreading the product on nearby fields,” he explained. “Not only does that mean that fields further away are missing out, it also runs the risk of creating nutrient instability on the nearby fields, which can suffer from too much phosphate if you aren’t careful.”

It was to provide a more comprehensive service that in 2013 Penrose Contracting invested in its first slurry tanker, allowing it to deliver vital nutrients to fields more than a kilometre or so away. With the increasing focus on making the best use of those nutrients – and bearing in mind the current focus on ammonia release – the company is moving away from application by splash plate and instead using dribble bars or shallow disc injectors.

“This is a valuable resource and it makes sense to put it where it can do the most use,” said Josh, “rather than just splashing it across the field.”

He added: “According to technical data on the DEFRA website, using a dribble bar reduces wastage by 35% compared with a splash plate, using a trailing shoe cuts it by 65% and spreading it via a disc reduces it by 90%. Add to that the likelihood of stricter regulations around ammonia in future, and the argument is pretty conclusive.”

There will always be a place for umbilical slurry application, not least when bad weather means a speedy service is essential and might make it difficult for tankers to access fields. “We offer a comprehensive choice, but whatever approach we take we strive to deliver the best possible service,” said Josh.

The company has also recently introduced a ‘nurse tank’ service, taking slurry to a stationary tank on a field edge and using an umbilical system, dribble bar or deep leg injectors to spread it. “It’s a way of getting the slurry out to fields on the edges of the holding when the field conditions mean tankers could not travel without putting mud on the road,” Josh explained.

Given the value of the commodity in the average slurry lagoon, Josh also uses agitators to make sure not only that the whole lagoon can be emptied but that the solid and liquid elements are mixed into a homogenous and more beneficial whole.

“Consistency is key,” he explained. “Whether that’s in the slurry we are spreading, the carefully screened woodchip we supply or the forage crops we cut, we aim for a reliable, repeatable end product.” Using an agitator to break up the solid crust around the edge of the lagoon is so efficient that one of Josh’s clients has not had to bring in a digger for the past six years.

Josh is keen to offer an analysis service for the slurry he delivers so that farmers fully appreciate the benefits of a home-grown input that reduces fertiliser costs while improving soil health and boosting crop growth.

After earning a National Diploma in Agriculture from Plumpton College in 2008, Josh worked his way around America, Canada, New Zealand and Australia. Although the family farm, Burgh Hill Farm, Chiddingly, had by that time been rented out, Josh was soon offered some contracting work locally, and jumped at the chance.

“I never believe in turning down an opportunity, so I picked up a second-hand John Deere 7530 and a few bits of kit and started out,” he said. “I did 3,600 hours in that tractor in the first year.”

Helping and inspiring him both then and now has been wife Charlotte, who deals with the paperwork generated by a thriving business.

Penrose Contracting also operates a Pottinger forage wagon that runs alongside the self-propelled forager as a cost effective alternative in lighter forage crops which does not compromise on quality.

The woodchip side of the business started in 2015. “Woodland management has always been a passion of mine and I have great memories of spending time as a youngster in the forest with my father Antony, who is very supportive of what I am aiming to achieve within the business.”

Antony also has his own woodchip-powered boiler, which has given Josh a useful insight into the product and allowed Penrose Contracting to refine its service. The business also converts waste material from Copford Saw Mill into woodchip.

As with other aspects of the contracting business, Josh began by working with Ben Nicholson in Ockley and using his chipper, focusing his own efforts on hauling the timber and distributing the end product. Now he not only has his own chipper, but a full range of tree shears, grapples and all other necessary machinery, together with extraction and haulage kit – everything that is needed to harvest, chip, screen and deliver it.

Josh is always looking to acquire more standing timber, working with landowners to provide a resource within woodland management schemes.

“You can’t stand still; you have to keep moving on,” he said. “Margins are smaller, machinery and labour costs are higher – you have to get the maximum output from your investment.”