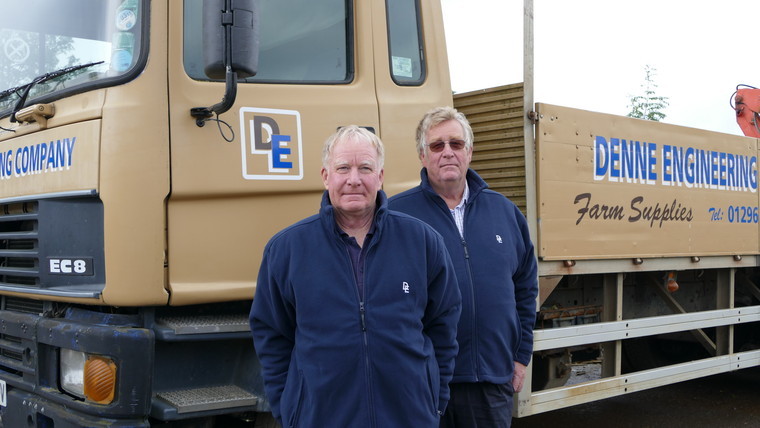 Before founding Denne Engineering Company in 1967, Ronald Denne, who was known to his customers as Mr Denne, led a rich farming career.

Having grown up on a tea plantation in Ceylon, Mr Denne moved back to the UK when his parents took over his mother’s family’s ironmongery and car business in High Wycombe. With a passion for farming, after the war Mr Denne enrolled on a course at the Berkshire College of Agriculture and upon graduating moved to a dairy farm in Swindon, Wiltshire, to milk cows.

From here, Mr Denne moved to a dairy herd in Sevenoaks, Kent, before taking on a role as farm manager in Hastoe, near Tring, Hertfordshire. During his time in Hastoe, Mr Denne saw an opportunity to help other local farmers and began making and selling pieces of equipment under the name Hastoe Engineering.

In 1967, however, he was made redundant. With a wife and four young children to support, he made the brave decision to purchase Old Bakehouse Farm, an eight-acre pig farm in the village of Drayton Parslow, Buckinghamshire and Denne Engineering Company was formed.

“Our mum’s parents bought the house and the land and dad’s parents lent him £2,000 to buy a car, a trailer and a bit of stock,” said Nigel Denne, who joined the business with his brother Hugh in the 1980s. “Father looked after the pigs in the evening and during the day he designed, manufactured and supplied feed hoppers to other farmers. The list of stock started to grow and over 50 years later, what started as one man with a Land Rover is now one of the largest independent farm suppliers in the area.”

During his lifetime, as well establishing Denne Engineering, Mr Denne also bought a 200-acre farm, which is now overseen by Hugh; set up Stewkley Storage Ltd, which is run by Nigel and Hugh’s sister Jo; and opened Denne Country Stores, which is owned by brother Mark and managed by Simeon Denne, Nigel’s son.

“For one man to be able to create what he did in a lifetime is quite remarkable really,” said Nigel. “He successfully created careers for all of his children for which we have been very grateful.”

Located within five miles of each other, the businesses are all very closely linked, and the Denne children all continue to work together to further their father’s legacy. While there is plenty of cross over between Denne Engineering and Denne Country Stores, the two businesses are actually operated separately.

“The Country Stores in Soulbury, near Leighton Buzzard, stock a lot of the same products as us, gates, timber and feed, for instance, but the shop is much more focused on the equine and pet sector,” said Nigel. “The Country Stores is a traditional retail unit, with a shop counter and instant purchasing system. Denne Engineering on the other hand understands that farmers are likely to make several orders throughout the month and so we operate an accounts system, providing customers with one simple monthly invoice.”

While Mr Denne, according to his sons, wasn’t an “overly outgoing” individual, finding the tasks of meeting and greeting new customers and cold calling very challenging, he did instil a strict ‘customer comes first’ attitude into all of his children.
Building on this core ethos, over the years brothers Nigel and Hugh have continued to nurture personal working relationships with farmers of all types, from smallholdings to large agricultural enterprises.

“Service is our mainstay,” said Nigel. “We know our farmers; they know us, and it is a very personal kind of relationship we have.”

While big multinational farm retail chains may have moved into the region, the Denne family’s approach to business has allowed them to develop a strong and loyal following and Hugh and Nigel still deliver to some of their father’s first customers.

“There are very few independent suppliers left,” said Hugh. “Our two local competitors both used to be independent but are part of much bigger chains now. It’s sometimes difficult, but we never struggle to compete with them for business because farmers appreciate our service. I have been serving some of the same people for over 30 years now, and there are one or two farms who are dad’s original customers and we are now working with subsequent generations.”

Through word of mouth recommendations, in the last five years Denne Engineering’s client base has increased by around 20% and today the company employs three other members of staff to help with deliveries, manage the busy yard, and arrange the accounts.

“We haven’t really changed much over the years because customers appreciate the reliability factor,” said Hugh. “We know what farmers want from their suppliers and that’s why we focus on doing the simple things really well.”

By getting to know each farm they supply to inside and out, the Denne brothers are able to tailor their services and can often take the pressure off busy farmers, especially when it comes to remembering to order regular stock and supplies.
“We know what our customers order and how often they usually need items replenished,” said Hugh. “If they have forgot to order something, we will make sure we have spare on the van so they can take it if they need. I also know where each of my customers keeps everything, from their dairy chemicals, sheep nuts and silage wrap to feed, rubber gloves and so on. If they have run out and no one is around, we will often leave stock, with a note saying that if they don’t want it, we will pick it up next time we’re passing. It is a very personal approach to business.”

Seeing it as much their responsibility to prevent their farming customers from running out of stock at crucial times, the brothers have developed a well organised fortnightly delivery schedule which operates across the counties of Bedfordshire, Buckinghamshire, Hertfordshire, Middlesex, Northamptonshire, Oxfordshire and North London.

“People are looking for reliable service and that is what we are here to provide,” said Nigel. “If something is out of stock, we can advise on and supply an alternative brand or product, and while our customers usually have ample stock to last two weeks between deliveries if there is an emergency, for instance if a dairy farmer runs out of calcium, we would rush out to them.”

Holding stock of everything

As well as sending stock out on its two HGV lorries, pick-up and two trailers, Denne Engineering also run a very busy yard which is open six days per week.

“We are home to one of the largest timber yards in Buckinghamshire, holding stock of everything from picket fencing to sawn rails,” said Nigel. “Alongside the timber we stock a huge range of items from well-known manufacturers, most of whom we’ve been working with for decades.”

One of the first suppliers who approached Mr Denne over 30 years ago was Deosan. Today, brothers Nigel and Hugh continue to work with the dairy hygiene specialist to provide their customers with a full range of cost efficient and effective cleaning and sanitation solutions.

A complete range of animal handling and feeding equipment comes from family run British firm LM Bateman, as well as IAE who also supply Denne Engineering with a vast range of fencing, gates and hurdles.

For those thinking about repairing or re-establishing fencing during the winter months, when animals are housed indoors, Denne Engineering’s timber yard is kept well stocked by James Davies, a family-owned sawmill and timber business known for its durable quality products.

Further fencing supplies come from the reputable Tornado Wire and others, and for forage preservation supplies such as baler string and nets, silage wrap and sheeting, farmers can choose between Trioplast, Cotesi and Visqueen.

As both Nigel and Hugh are registered R-SQPs, able to provide advice and supply the correct medicine for treatments including all endo and ecto-parasite remedies, certain mineral deficiency supplements and local anesthetic for livestock, equine and companion animals. The brothers are also fully qualified to supply rodenticides to both private and professional users.

“When it comes to choosing what products to stock, we have just focused on keeping up with the changes in farming,” said Hugh. “Customers will often ask if we can get certain products and we will always see what we can do.”

One of the newest additions to the range is a selection of mineral and feed buckets from Strathclyde, which is part of the Harbro group.

“The new pre-lambing mineral licks have worked just brilliantly for us,” said Nigel. “When we first took them on, we sold about 1.5-tonnes in a year, but last season we sold over 8-tonnes and I am forecasting sales at around 15-tonnes this year; sales have jumped at an alarming rate.”

Looking to the future, the Dennes certainly benefit from a large and very tight-knit family. While there is no pressure for the next generation to come up into the family business there are many opportunities for them to continue building on the independent, personal farm supplies business which was first started by Mr Denne all those years ago.