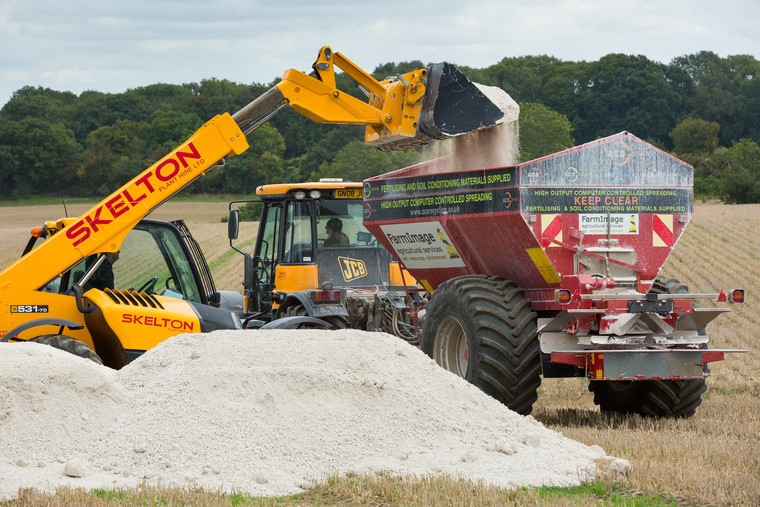 There can be few businesses that add value, deliver a vital public service and provide farmers with a subsidised source of nutrients for their land all at the same time quite as effectively as Austin Contract Services (ACS).

ACS collects, sells, stockpiles and spreads every last tonne of treated sewage sludge – more properly known as biosolids – produced in Kent, Sussex and Hampshire by Southern Water. That currently means finding a home for around a quarter of a million tonnes a year, no easy feat when production can’t be adjusted to meet demand.

The challenge is heightened by the fact that spreading has to be done at the right time for each individual farmer, depending on his or her own cropping pattern, making for some complicated logistics at busy times of the year.

It takes a dedicated team, a great deal of experience and considerable investment in plant and machinery to ensure the biosolids we all help to produce are put to good use delivering nutrients to the soil.

Because ACS is paid by Southern Water for the environmentally vital job of finding a home for the sludge, farmers pay a subsidised price for a valuable natural fertiliser.

The other good news for farmers is that ACS offers the complete package, an end-to-end tailored service that starts with soil sampling and ends with spreading the sludge on the fields at the requested time and gives farmers one single point of contact for the entire operation.

Managing director Charlie Austin has a good 30 years’ experience in recycling waste material as fertiliser, and with cropping patterns and variables such as the weather to consider, he needs every bit of it to match supply with demand.

Although the sludge has been treated, it still needs to be handled with care, and there is a strict compliance regime that has to be followed whenever biosolids are spread onto land.

The vitally important soil sampling aspect carried out at the start of the process is done by ACS’ subsidiary business ACS Farm Image, which has considerable experience and a well-deserved reputation for sampling and scanning.

ACS Farm Image makes absolutely certain the land is suitable for the treated sludge and ensures the legislative criteria are met and the necessary Environment Agency permits are obtained.

The ACS team, led by Head of Operations Bert Hessink, has to collect the treated material throughout the year, as Southern Water has very little storage on its sites. It then has to be stockpiled carefully on customers’ farms – again after complying with all the legislation – ready for spreading at the required time.

“We pride ourselves on delivering the whole package, from sampling to spreading, so that farmers benefit from better quality soil at low cost and with very little hassle,” said Charlie. “We do everything; all they have to do is tell us where we can stockpile it and when they want it spread.”

While moving, stockpiling and spreading the sludge is the visible part of the operation, the paperwork behind the scenes is if anything more complex.

“I have one member of the team, Carly East, whose only job is compliance,” explained Charlie. “She uses complex software that is designed to manage the safe application of biosolids to land. It’s something we take very seriously and it keeps Carly busy full time.”

As well as supporting the compliance side of the ACS business, ACS Farm Image also offers a wide range of other sampling and analysis packages that are designed to boost farmers’ productivity.

Precision sampling uses GPS technology to sample a field systematically, taking 16 cores from every hectare to paint a more accurate picture of the field and allow the creation of a precision map showing levels of pH, P, K and Mg across the area being reviewed.

For an even more detailed picture of the fertility of the soil, Farm Image’s smart scanner service uses Veris Technologies equipment to take 200 readings per hectare and create field maps that give an impressively accurate reading of pH, organic matter, soil texture and topography. The company believes this can save the farmer large amounts of money by allowing them to be more accurate and efficient with both drilling and spraying.

“When growers have invested hundreds of thousands of pounds in high-tech variable rate machinery they need to make the most of it, and that’s only really possible by sampling on an intensive scale and looking carefully at soil property zones,” explained Head of Farm Image Louise Burley.

Farm Image works closely with contractor T D Boxall to supply and spread agricultural lime after checking the pH of the field and advising the farmer on where lime is needed and the amount needed to correct any imbalance. The company also provides a GPS variable rate spreading service using the fleet of spreaders owned by ACS and Tim Boxall.

“It is impossible to stress how important it is to maintain the appropriate soil pH for the cropping system and soil type, and ACS Farm Image prides itself on providing a fast and efficient liming service that can cost-effectively help to minimise costs and maximise yields,” said Louise.

“We believe farmers should be able to spend a pound to earn ten by making sure their soil contains the right nutrients, but they need expert help to do that efficiently.”

ACS Farm Image is determined to build on its growing reputation and has plans to grow the business substantially over the next few years. New Agri Manager Steve will play a key part in developing relationships with the farming sector, while biosolids operations are managed by Sam Barnes, who looks after farmers and growers in Kent, Ted Hobden, who is responsible for Sussex and Alan Bate, who covers Hampshire.

ACS itself is also looking to grow the business, and Charlie is keen to talk to other water companies that need the by-product of their operation taken away and put to good use, as well as farmers looking for low-cost fertiliser supplied and spread “without hassle”.

Charlie first came across the industry 30 years ago when working as a tractor driver running sludge out of a paper mill. “I became interested in the process and then set up on my own 21 years ago with £200 in the bank while living in a two up, two down,” he recalled.

ACS became a “proper end-to-end contractor” in 2011 when it began taking the treated sludge from Southern Water, and the company has grown considerably since then. Its environmental importance was confirmed when ACS was given key worker status at the start of the coronavirus pandemic.

The purchase of Farm Image some years back helped make the process more efficient by bringing compliance and soil sampling in house, as well as giving the company’s clients easy access to ACS Farm Image’s liming and fertiliser supply services. ACS now employs around 40 people and is the biggest end-to-end biosolids operator of its kind in the South East.

The company operates a fleet of 13 lorries, 10 GPS-equipped spreaders and around 25 excavators and loading shovels, along with a fleet of Fendt 939 and 828 tractors.

Head of Operations Bert Hessink makes sure everything runs smoothly as well as supporting the area managers and working alongside ACS Farm Image.

“It’s not always easy because we need to schedule the spreading in with farmers’ requirements and we have to move the sewage cake out of the sites whenever Southern Water needs it moved. And on top of these variables we also have to worry about the unexpected – like traffic jams or the weather.

“There is a lot of plates to keep spinning, but this is a great team and we work hard together to deliver a great service, both to Southern Water and to the farmers we support.”