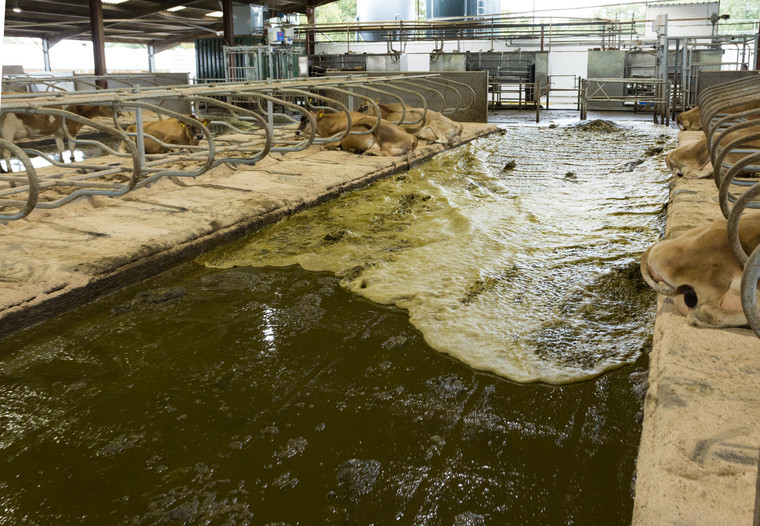 When Peter Sargent returned from university to join his parents Rosemary and Mike on the family dairy farm in Biddenden, Kent, the 100-strong herd of Jerseys was being milked in an old eight abreast parlour unit.

“I was milking for up to 10 hours per day and it was just too much,” said Peter, partner at S.E Lane and Partners, “so 10 years ago we made the decision to invest in two robotic milkers.”

The installation of the Merlin robots at White House Farm successfully reduced milking time by around 60%, with four hours a day alternatively spent training heifers, fetching up long hour cows and bringing in suspected mastitis cases. Yet, this still wasn’t efficient enough.

The system had also been adapted to work within the existing building, which is now used to house in-calf heifers. A long wooden feed barrier was located down the centre of the shed and the remaining space used for a straw yard. This, however, wasn’t an ideal set-up. The feed passageways were slightly too narrow and as the cows began producing more milk year-on-year the robotic milkers were being pushed to capacity too.

“As the years went on it became apparent that the cows needed more room,” said Peter, who is also the chair of the cooperative buying group, West Ashford Farm Supplies. “There were more cases of mastitis and there was still a lot of work involved with pushing the cows through to the straw yard in order to scrape up. It became time to not only give them more space, but to reduce the workload per cow, so I designed a new dairy unit.”

Despite there being plenty of uncertainties ahead for the farming industry, including an increasing number of consumers shying away from meat and dairy products, Peter is confident in the long-term future of dairy and with absolutely no future in the farm’s old milking system, the decision was taken to invest in new facilities.

“The nutrients from milk simply cannot be replicated and with an increasing worldwide population there will always be a big, consistent demand for milk,” said Peter. “There are a lot of challenges ahead over the next few years, but we can export around the world so there will always be a place for dairy. It is a diet staple and the nutritional value is just too important. We as farmers just need to keep up our end of the bargain, which is to increase animal welfare standards, lower the carbon footprint and invest in sustainable farming practices.”

While it is thought that Peter’s grandfather, Stan Lane, who purchased White House Farm in 1962, chose Jerseys because “they would have been the cheapest cows available at that time”, the Sargent family also have a lot of faith in the future of the “nice little breed” which is more efficient.

“Over my entire career the UK has been infatuated with liquid milk, but looking ahead, the most prominent milk contracts are those linked to processed dairy products and brands,” said Peter. “We have always worked with cooperatives and are currently members of Arla. They pay on the constituents of milk and while the black and whites might be great for volume, the Jerseys produce the solids.”

Using one of the farm’s existing straw and hay storage barns, with two lean-tos either side as the base, Peter came up with the fundamental design for the new unit. Following extensive research online, he then presented his concepts to parents and after being given the go-ahead sought final advice from knowledgeable cow house planning consultants CowPlan Ltd.

“We had a lot of help from Ivor Davey who made a few small tweaks along the way,” said Peter. “He knew how much space the cows would need and suggested we make the alleyways and cubicles slightly bigger. To make room for this, he suggested that we move the feeding barriers outside and now these are in a convenient horseshoe shape around the main housing area.”

Aiming to encourage the cows to lay down as much as possible, to prevent lameness and yield losses, each of the 210 cubicles benefits from a Wilson Agri mattress and fresh bedding twice a day, as new sawdust is added in the morning and fresh sawdust is brought forwards in the afternoon.

“The environment in the unit is just superb really,” said Peter. “We have left a large space in front of the head rails which takes into account that the cows will lunge one third of their body length when they get up. This has increased lying times for the herd.”

Work began on the project and after installing a polytunnel (used as a lambing shed, along with hay and straw storage) and gutting the existing structure, local Pluckley-based firm FGS Pilcher were appointed to complete the civils and concreting works within the housing unit. While on site, the team also extended the farm’s clay lined lagoon.

Designed with animal welfare in mind, Peter wanted to implement a system which would not need to be accessed by machines on a regular basis and would avoid having to push cows up unnecessarily. While the Sargents still need to fetch in young heifers and gather cows for the vet routinely, a special flush wash system ensures that the cows are no longer herded around on a daily routine.

“The system flushes 3,000-litres of recycled water through one of six valves every half an hour,” said Peter. “Each valve is connected to a 10-metre high water tower, which is controlled by a pneumatic valve. Once this is released, the height of the tower provides sufficient pressure to drive the water all the way through the housing unit, which is on a 2.5% gradient, to a channel at the bottom.”

From here the waste is transferred to a separator where solids are destined for the muck heap, to be ploughed into the maize ground in the spring, and liquid is recycled back into the holding tank, which also collects wash water from the robots, plate cooling water and rainwater from the feed alleyways and silage pit.

“The flush wash system is much cleaner than using the scraper and in summer the beauty is that the floor is always wet, there is never a slurry film which is just drying,” said Peter. “Some of the concrete flooring near the valves has been slatted and we were considering retrospectively grooving the rest of the housing unit, but the system is already doing a good enough job without, and the cows have not had any issues with grip under foot either.”

Milk first system
Moving from the cubicle area, the cows are able to access the feed barriers via a milk-first guided system. As they approach a drafting gate, a scanner will read the ankle tag on each animal and depending on whether or not the cow needs to be milked, it will either open a barrier leading to the feed area, or to the robotic milkers.

“The great thing about the milk first system is that it is all focused on positive reinforcement,” said Peter. “It only takes about half an hour to train them to use the drafting gates because the cows are very driven by food and no matter which way they go, they will be fed. If they don’t need milking, they have access to silage outside and if they do, they come into be milked and have access to the cake in the robots.”

This positive cow flow system gets the animals moving around naturally and once each cow has been out to the feed area, if they want to lie down again, they can simply come back into the cubicle area through a non-return gate system.
“We have also installed six feed stations which again incentivises them through the drafting gates,” said Peter. “These are spread out down either side of the shed to prevent bullying and spread the cows more evenly through the unit. A lot of people thought that the drafting gates would cause problems with feed intake, but in fact our cows are eating more, and we are happy because we don’t have to spend time getting 20% of our cows into the milkers morning and night.”

Once in the milking area, the cows are able to access the three robotic milking machines. Installed, maintained and serviced by Andrew Bayfield at MMT, the original two robots have been moved from the old dairy unit, with a third second-hand machine acquired to help the farm increase capacity.

The unit also benefits from an LED lighting system, installed by the farm’s electrician and one of the project’s main contractors, Andrew Kenwood. As well as providing even lighting through the unit, there is a special programme which promotes the increase of yield too.

“We have already noticed that in this system the cows are producing a lot more milk,” said Peter. “We are feeding them the same diet, but they are yielding around 15% more and are producing much better solids too. I think this is simply down to space, cleaner beds and happier cows. There is significantly less mastitis too which has made a huge difference. Our cell count has gone from 150 to less than 90, which is significantly better.”

The project has been part funded by an RDPE LEADER grant, which was overseen by Ben Watts at Kite Consulting who visits White House Farm on a bi-monthly basis and also helps to review the farm and other wider areas of the business such as profitability, nutrition, herd health and fertility, strategy and financial management.

Even with this funding, to make the large investment into these new and improved facilities economical, the Sargents are now in a transitional phase, focused on expanding the herd. Rearing their own replacements, numbers are already up to 170 head, which includes dry cows and heifers.

The new unit will happily house 200 milkers and the farm’s long-term goal is to reach 240 cows overall. This is to achieve year-round maximum capacity, pushing as many litres through the robots as possible. With this increased output, Peter is hoping to be able to employ some full-time herd assistants, so that Rosemary and Mike can choose how much time they want to spend working on the farm.

“In the old system, each robot could work with 65 cows,” said Peter. “We have invested in another robot and because of layout of this new system I think we can increase the number of cows per machine too. This winter is a really good opportunity to see where the numbers lie and whether we want to keep the milking herd back to 190 instead of 200.”

To keep an eye on the overall success of the system, the unit even includes an insulated dairy management office block which was provided and installed by Create A Cabin. This essential hub, which was fitted in just half a day, allows Peter to monitor the extensive computer programmes which feed information on everything from the activity of bulling heifers to milking data.