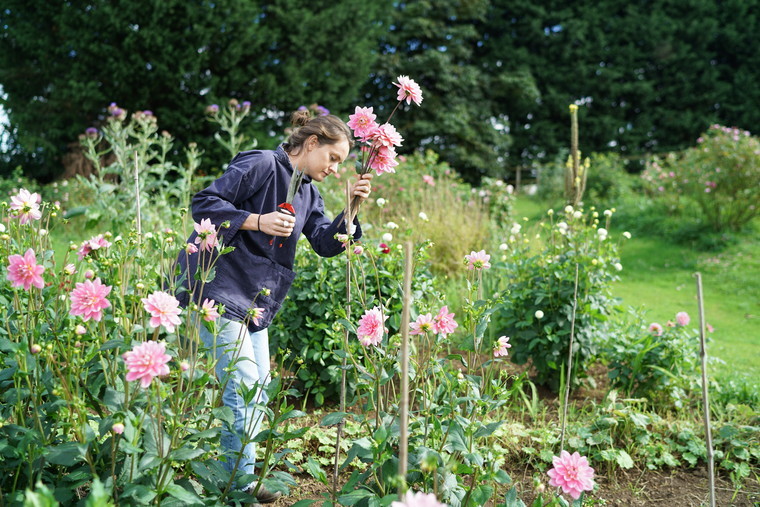 Both Bridget and her business partner Henrietta Courtauld are passionate about soil health. They met in London and founded The Land Gardeners back in 2012 to find ways of improving soil health for their own growing and for others.

Before that Bridget grew cut flowers and experimented with biodynamic gardening on the family farm, Craigmore Station in New Zealand, before moving back to the UK 12 years ago.

It was during this time that Bridget realised how serious climate change was and became concerned about the detrimental impact of inorganic fertilisers and conventional farming practices on animal and plant health.

The land gardeners and making compost

The gardening duo are fanatical about compost, believing it to be key to improving soil health and sequestering carbon. UC Davis in California has just finished a 19-year study, directed by Kate Scow, Professor of Soil Microbial Ecology, showing that the use of compost and cover crops is a game changer in sequestering carbon into the soil. Soil carbon content increased by 12.6% over 19 years, 0.7% annually. In addition the study concluded that “compost provides not only carbon but also additional vital nutrients for soil microbes to function effectively”.

On arrival we sit down for coffee and I am presented with three pots of compost to try. It’s a bit like wine tasting. Two pots contain well-known competitor brands, both of which feel quite dry, and one of which contains a large amount of undigested woody matter.

“Our compost feels like it’s alive; it’s sticky, which is an indication of humification and a high microbial mass. Humus is what drives healthy, productive soils. Soil biology is responsible for creating humus, which is the single most efficient storage of water, minerals and carbon within soils.

Gesturing to one of the other pots, a well-known organic brand, she said: “It’s more like a medium – it doesn’t have much mass or aggregation. If we run out of our compost it’s what we use.”

Bridget explained that it’s not easy to make good compost. She said the big composting plants, where the compost often reaches very high temperatures can churn out an inert medium that doesn’t add any microbial life to the soil.

In contrast, Climate Compost’s raison d’etre is to create microbial rich compost that improves soil health and sequesters carbon from the atmosphere, as well as increasing the water holding capacity of the soil. Another big benefit is the increased capacity of the soils to grow nutrient-dense food.

Curious to learn more about their approach, I asked who inspired them to start making Climate Compost. Bridget explained that several years ago they visited the Hex Garden Festival in Belgium, where they found a brilliant farmer called Marc Verhofstede in the walled garden teaching a workshop on how to make compost.

“We were deeply inspired by him and this led us onto discovering Austrian soil scientists Angelika Luebke and Urs Hidlebrant, who teach a microbial composting method which has had remarkable results on soil health in Austria and around the world,” she said.

“We are also avid followers of Kay Baxter at the Koanga Institute in New Zealand and her work with nature, soil, composts and seeds,” she continued. She highly recommends Kay’s online learning programs Regeneration Productions for a wealth of knowledge.

Not all food is equal

I was fascinated to learn that the garden team at Wardington has been measuring the nutrient density of the food they produce with a refractometer. When they first began testing before starting Climate Compost they were broadly a two on the brix scale. They now fluctuate between a six and a 12, testament to the huge improvements they’ve made to their soils.

They have been making microbial compost at Wardington Manor for a number of years now and have scaled up from small batches to bigger compost windrows. Making their compost is a six to eight week process, explained Bridget. Ratios of ingredients are key to getting the final product right. They recommend using around 40% carbon, such as straw, to 30% nitrogen, which can be a mix of 10% fresh greens and manure. They then add 10% old compost as an inoculant and 10% clay, which they use as a stabiliser, which provides a home for the microlife as well as greatly extending the life of the compost.

In addition it is vital to create the right conditions for the microbes to thrive and start to digest all the matter, Bridget explained.

“Its about achieving initial temperatures of between 59 and 65 degrees and turning it to ensure it does not become too hot and that the compost stays aerated, providing oxygen for the microlife. You need to keep it well watered, too,” said Bridget. The height of the windrow has also been standardised to help keep it from overheating and killing off essential microbes.

Bridget explained how they build their windrows in layers like a lasagne. They start with a carbon layer of straw then alternate carbon and nitrogen, finishing with a layer of clay. They water it as they go and finally turn and cover it.

“We then start measuring it on a daily basis to test its temperature, oxygen and moisture levels, turning when it becomes too hot or if there is not enough oxygen in the pile,” she said.

More recently they have invested around £12,000 to buy a Swiss made Gujer Compost Turner (TG 201) designed to fit compact loaders from 30hp.

I was excited to see this bit of kit in action and we took a short drive to a nearby farm where they have rented some empty livestock buildings for the summer months.

The buildings contained several long windrows of compost on a concrete floor. In the corner was an intermediate bulk container (IBC) filled with carbon filtered water and an electric pump. Catie Jarman, who is coordinating the compost at the Land Gardeners, hooked the compost turner on to an Avant – a small green loader – with a little help from Bridget.

Positioning the green loader at the start of the windrow and attaching the water hose, Catie engaged the hydraulics. The machine burst into action, turning over the compost while also jetting water into it. As the machine moved along the windrow, it left behind a beautiful dark material. I was impressed.
Eager to hear the results of their own trials, I asked Bridget what impact using Climate Compost had had on their own garden.

“We found our sweet peas grow a lot longer and they lasted longer,” she said. They also found the following year’s growth was much better than the first, suggesting a legacy effect.

They also had a bad area of the garden and decided to use compost and cover crops to aerate the soil. The second year when they planted salad leaves in the area it was completely transformed, producing a good yield.

They have also started working with farmers on a bigger scale.

In 2016 Bridget and Henrietta set up trials with Innovative Farmers, a not-for-profit organisation created by the Soil Association. During these trials they worked with farmers and growers in Sweden, Belgium, Mozambique, New Zealand and Austria and found this method worked with different ingredients and climates.
They worked with an island off Mozambique which was unable to grow vegetables due to the lack of topsoil until they introduced this method of composting. Polly Nicolson led the trial and made windrows using chopped up banana leaves, goats’ manure swept up from the village and grey water from the homes on the island.

Closer to home they have been making compost at Culworth Grounds in Northamptonshire and are also working with the team at Waddesdon Manor in Buckinghamshire. They hope to start trialing it at Fir Farm in Gloucestershire this autumn, too. They are hoping that the information gained from these trials will help mould their future tool kit for both gardeners and farmers.

More recently Bridget and Henrietta have started working with Dr Mark Pawlett, Senior Research Fellow at Cranfield University. He is a Soil ecologist (C.Env) interested in the implications of manipulating soil biological properties on soil function.

Together they are looking at microbial activity, carbon sequestration and nutrient availability in Climate Compost.

Plans for the future

While planning to sell small amounts of their compost this autumn, they will be launching properly in the spring with 2L, 10L and dumpy bags. In the meantime they are researching packaging, aiming to make it out of breathable, biodegradable bags and linens.

In addition they are developing their toolkit for farmers, which can be scaled up and down depending on the size of the interested farm or horticultural unit, which they hope to have on their website for their launch next spring.

Ultimately they would like farmers, growers and gardeners across the country and beyond to be making ‘climate compost’ and using it on their farms and in their gardens to improve their soil health. Their goal is to be able to use Climate Compost, as both an inoculum and in tea form, on a 10,000 acre farm in New Zealand without the need for any other fertilisers.

Bridget envisages groups of farms working together to make compost, especially as the compost turner can be quite expensive, though from a brief bit of research on YouTube, there are a number of farmers making their own from bits of scrap machinery.

Buying compost in can be expensive, but it was encouraging to see that this compost was made using materials that are easily accessible to most farmers, such as farmyard manure and old bales of straw and hay. This compost stands out because it is ready in eight weeks and is full of microbial life. Unlike green waste compost which needs to be applied in thick layers to have impact, this compost can begin to improve soils from even a small application. The benefits of this microlife can be scaled up for larger farms by making compost teas that can be used as a foliar feed.

With the Environmental Land Management (ELM) scheme on the horizon and carbon becoming a hot topic in farming, it’s important to begin to understand the soil beneath our feet and how we can rebuild organic matter and sequester carbon in the ground, as well as growing nutritious food. I’m sure this toolkit will prove a useful guide to those looking to advance in regenerative agriculture.