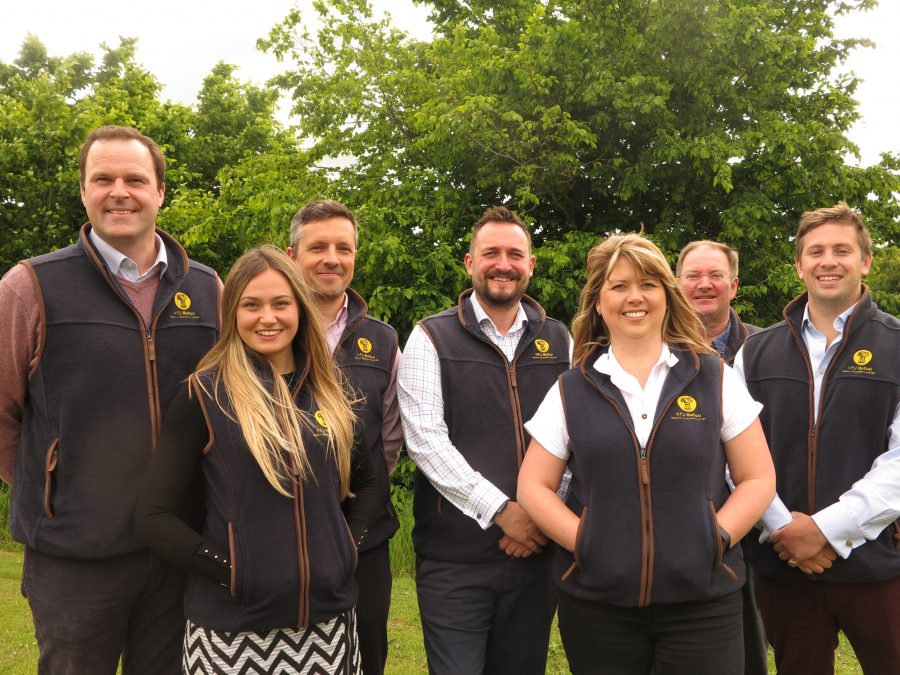 Technology is a wonderful thing, but when storm force winds are tearing the roof off the barn and torrential rain is exploiting the holes left by missing tiles, all you really want is a friendly voice on the end of the phone.

While online communication channels have their place, customers of NFU Mutual Ashford, Tenterden & Whitfield continue to enjoy the reassurance provided by a calm, professional voice offering help and support in an emergency.

Doug Jackson, senior partner of the three colleagues who head up the agency, explained the philosophy.

“The fact that we are available on the telephone or in person is something our customers value greatly and is at the forefront of the service we offer. We pride ourselves on the fact that we are just a phone call away, or on the doorstep of, the clients we serve,” he said.

And while direct and easy access to account managers goes hand-in-hand with a more locally focused insurer, the Ashford, Tenterden & Whitfield agency’s place within the wider NFU Mutual Group means it also benefits from the scale of the long-established, UK-wide, composite insurer.

That combination of over a century of experience and fleet-of-foot local office was well demonstrated in the days following Storm Eunice, when hundreds of farmers and householders were phoning in to report damage to their buildings.

Rather than putting clients through to a specific claims team, every member of staff in the offices in Ashford, Tenterden and Whitfield simply stopped what they were doing and answered the calls.

“It was all hands to the pump,” recalled George Ashby, partner (farming). “Our priority at that time was dealing with the influx of claims. Many of our customers were picking up the pieces after the devastation caused by the storm – so everyone in all three offices was tasked with taking calls.”

NFU Mutual Ashford, Tenterden & Whitfield is headed up by Doug, George and fellow partner Darren Smith. Doug and George worked alongside the previous incumbent at what was the Ashford and Tenterden offices and were then joined by Darren, who was made a partner after having worked for the business since 2006.

Jackson, Ashby and Smith took on the Whitfield office in 2018 to create the agency as it is today, and the trio are determined to deliver the best possible service across their area of Kent and East Sussex.

With the central admin team conveniently based at the Invicta Business Centre, on the same site as Ashford Market, the business is investing heavily in improving both the Tenterden office, which is just off the High Street, and the newly renovated Whitfield site, on the White Cliffs Business Park.

Customers are encouraged to visit the offices, and since all the records are held centrally, a Whitfield customer who happens to be visiting Ashford Market on a Tuesday can easily pop in to the Ashford office to discuss any aspect of their policy or talk about any of the other NFU Mutual offerings.

NFU Mutual offers a wide range of products, including general insurance, life, pensions, and investments. These products and services are delivered through a network of NFU Mutual agency offices, as well as through direct sales and service centres. With over 295 local businesses located in rural towns and villages throughout the UK, NFU Mutual has become part of the fabric of rural life and remains committed to serving the needs of members nationwide.

NFU Mutual is owned by and run for its members, which allows it to reward general insurance customers for renewing their policies by offering a mutual bonus in the form of a saving on the renewal premium. The organisation also has a strong community focus and supports a number of rural and farming initiatives.

While the Ashford, Tenterden and Whitfield team has a focus on farming customers – with partner George Ashby heading up a specialist team in that area of the business – the business also offers home and car insurance and is increasingly providing insurance to larger commercial customers, particularly in fields such as food and drink, hospitality, viticulture and retail.

Darren Smith looks after corporate and commercial customers and explained: “Because our farming and business customers appreciate the service they receive and have come to trust NFU Mutual, they often come to us to insure their homes and cars as well.”

That satisfaction with the insurer is borne out in the statistics, too. As a leading insurer, NFU Mutual boasts an exceptional retention rate, with 95.5% of policies renewing each year (based on three years to April 2022). “There are some family farming businesses that have insured with NFU Mutual for the past 100 years or more,” added Darren.

Both George and Doug are also Group Secretaries and together look after the NFU members across their Kent and Sussex area. Darren heads up the Tenterden office, where he has built up many local contacts, having worked across all areas of the agency before being made a partner.

Supporting the three partners is a strong team of insurance executives who ensure that all businesses are offered a yearly review to ensure their policies are suitable and cover their potential risks, from the age-old fire and theft cover to the more recent and ever-present threat of cybercrime. Each office also has a dedicated claims team to support customers when they most need help and advice.

Alongside the significant investment in the offices at Whitfield and Tenterden to create modern, welcoming surroundings for customers, the business has invested in people, with 50% more staff serving local farmers, business and private customers, and the number of insurance executives doubled from four to eight. There is now a 50-strong team serving customers across the area.

The partners have a broad range of experience, both within the industry and in other areas. George comes from a solid farming background but has also served in the Household Cavalry and spent time with Lloyds of London, while Doug worked as a farm business consultant with a major, multi-national firm. The team regularly meets customers old and new at ploughing matches, trade shows and other agricultural events.

NFU Mutual has strong links with the community and supports a number of local charities, and the Ashford, Tenterden and Whitfield agency is no exception. Having distributed charity funds on behalf of NFU Mutual to three local charities – Dandelion Time, Family Food Bank and Warming up the Homeless – the team continues to run other fundraising events for the charities.

Last year the three partners were joined by Phil Wheeler, a farming client and member, to complete Trailwalker, a 100-kilometre trek along the South Downs, in just 27 hours, raising more than £5,000 for Oxfam and the Gurkha Welfare Trust in the process.

“In our community work, as well as in the service we provide to our insurance clients, we do our utmost to make sure the Ashford, Tenterden and Whitfield agency is the best it can be,” concluded Doug Jackson.

Worked for various departments within NFU Mutual since 1977 and now specialises in reviewing farming and commercial clients’ insurance cover.

Joined the business in 2019 as an insurance executive with a background in project management, advising clients on how we can best protect them.  Claire follows in her grandfather’s footsteps; John Coles was a former Tenterden agent and Group Secretary.

Worked for the agency since 2010 in several aspects of the business. Jodie has been a claims handler and was once an agent herself in another area of the country.

Joined the agency in 2017 after working predominantly in the hospitality industry. Fully licensed in all NFU Mutual products, Ben also specialises in the National Intermediary Service (NIS) to help clients with more niche insurance needs.

Worked as an agent in another agency for the past 10 years, gaining considerable expertise.  Dan has worked on all aspects of farming and commercial insurance cover and has more than 25 years’ experience in the financial services sector.

Joined the Ashford customer service team in 2012 as a dedicated account handler helping customers with personal, business and farm insurance and now responsible for visiting existing customers to review their portfolios.

Charlie joined the Ashford, Tenterden and Whitfield Agency in 2018 as a member of the new business team. Having attended the Royal Agricultural University, he has close family links to agriculture and specialises in farm, commercial and personal insurances.