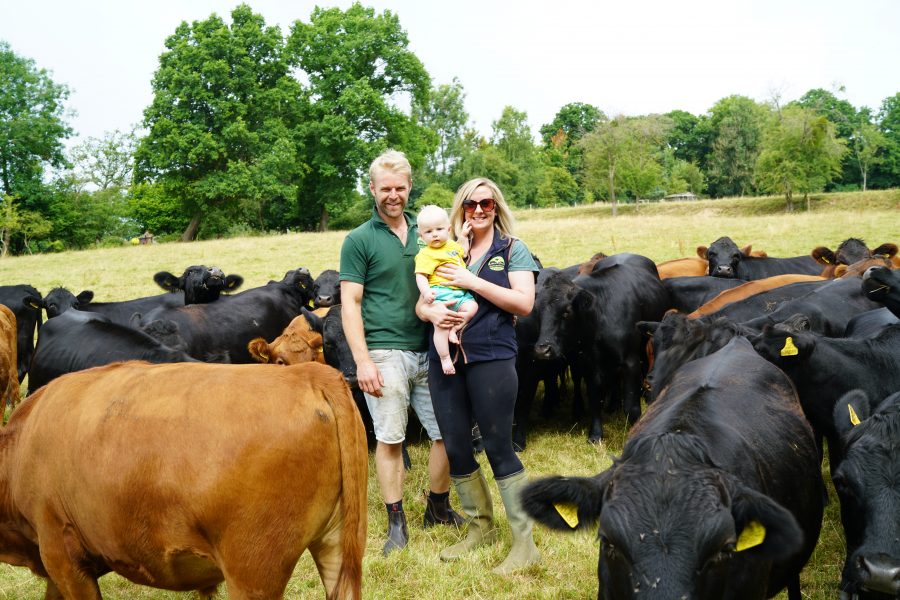 Arriving at Butterbox farm I drive past a picture postcard farmhouse and arrive in a traditional farmyard with a mixture of modern and old buildings, including a lovely old Sussex barn. I park up and make my way to the lodge, a Scandinavian-made log cabin, that is home to Gavin, Holly and their two young boys William (aged thee) and Oliver (eight months).

I learn that the 388-acre farm has been in the same family for nearly 100 years. The current owner, Pat Garratt, lives in the old farmhouse and keeps a close eye on her Dexter cows when they are calving, explained Gavin.

Pat and her late husband John have been long-time supporters of the breed, the smallest of the European cattle breeds (roughly half the size of a traditional Hereford cow), which until recently was rare, with only 2,050 cows registered in the UK in 2000.

Thankfully, by 2007 numbers had doubled and their popularity continues to grow amongst smallholders and farmers as efficient converters of grass. The fact the meat is much sought after by chefs and foodies has also helped their revival.

At Butterbox Farm they have around 40 Dexter suckler cows and around 125 head of cattle in total. The day to day running and management of the farm is shared between farm manager Peter Froggatt and Gavin the stockman, who have both worked on the farm for nearly 15 years.

Holly joined the team after marrying Gavin and moving into the newly built log cabin three years ago, just before the arrival of their firstborn, William.

Chatting to both, it is easy to see why the farm and meat boxes have gained such a following locally. They love what they do and revel in ‘selling the dream’ to customers, explained Holly.

When she first moved to the farm, she realised that selling direct was what they needed to do.

“It was a case of fresh eyes on a project. I could see Gavin was so great at showing people around the farm,” she said.

Holly offered to lend a hand and began working part time for the farm at the beginning of 2020.

“We started the whole thing during the first lockdown. The first thing I did was make some signs, pictures of us and the farm, and write about what we do and stick them up on gates as we have footpaths running through the whole farm.”

To create a brand, she designed a Butterbox Farm logo, putting their small family as the face of it, and set up social media channels to tell their story
(@butterboxfarm). She also built a website
(www.butterboxfarm.co.uk), a central hub to make it easy for people to find them online.

She began blogging and posting regularly on social media. The reaction was overwhelmingly positive, she said.

Finding out where your food comes from

Before long they were inundated with interest in their 10kg beef boxes and they started offering monthly collections from the old Sussex barn at the farm.

Getting the meat boxes back from the butcher, labelled and vacuum packed, they store them in second hand fridges (sourced online) ready for customers to collect them. They priced their standard 10kg box at £140 and sell out every month, she said.

“Families would bring their kids and Gavin and I would spend every collection weekend showing people around the farm,” she said.

“It’s a huge part of what we do – to build a bridge between the farm and our local community, making it an immersive experience. If we can just get people here once and they meet the animals, walk round the farm, you can generally get them to return as they see our farming practices and realise it’s so much better to buy their meat from a local farm,” continued Holly.

They now have a sizeable following of over 1,200 followers on Facebook and a large mailing list of regular customers, enabling them to sell between two and three bodies of beef a month.

Customers love that it’s Dexter beef, “which is still quite rare in this area,” explained Holly.

In addition to the Dexter cows, the farm is home to a breeding flock of 230 Romney ewes, though most of the lambs are sold through Hailsham Market. “There is also a DIY horse livery, a shoot, a large fishing lake and some commercial lets – all bringing in vital additional income,” said Gavin.

The latest addition to the farm are two Saddleback sows and a boar, with 10 fattening pigs, all living in the woods. Pigs aren’t something they’d previously considered, but beef customers kept asking about buying pork and with over 70 acres of woodland they decided to give it a go.

I ask Gavin and Holly how they got into farming?

“I wasn’t academic at school and fell into farming as I didn’t know what I wanted to do,” answered Gavin.

After taking a year out after school he did a carpentry course but didn’t enjoy it. He then tried his hand at landscape gardening which he preferred, working mainly outside, and picked up a job mowing the lawn at the farm. Pat the owner liked Gavin and asked him if he would do a few more hours on the farm.

“I don’t know one end of a cow from the other, so you’ll need to teach me from scratch,” he told her.

She agreed, putting him through Plumpton College on a day release course. The rest, as they say, is history.

Holly was always interested in farming and helped out with lambing on a local farm as a youngster. Initially she was deterred by a careers advisor, who told her she couldn’t be a farmer unless she was born on a farm. She followed their advice and went off to do a three-year English degree but couldn’t shake the call of the land.

Back home, she contacted Plumpton College and enrolled on a course studying agriculture. She met lots of great people, she said, including local dairy farmer Joe Delves, for whom she later worked before going on maternity leave and launching the Butterbox Farm brand.

Both Gavin and Holly are passionate about making farming more accessible and changing its perception in the public domain.

“Often farming gets a bad press. Older farmers wear it like a badge of honour – how hard farming is and the hours you work. You have to work 25 hours a day eight days a week, they suggest.

“Sometimes it’s nice to tell customers we’re off down the beach like a normal family. Farming doesn’t have to be all work and no play,” she said.

“We both love talking about farming and giving it the big sell; how cool it is and how people should buy their food from small regenerative farms.”

“All the animals are 100% grass fed,” explained Holly. They don’t have organic status but farm ‘organically’ she said, and use no bagged fertiliser on the land.

Cattle and sheep are currently set stocked and moved to a fresh field every few weeks, depending on growth rates. They make all their own hay and silage on the farm and the cattle are housed in a modern barn through the winter months, with the dung being spread back onto the land.

Recently they have visited some local regenerative farmers using mob grazing and bale grazing during the winter and are keen to give both a go, though admit getting the right electric and water infrastructure set up first is key.

I ask Holly which social media channel she prefers and what type of content she finds works best?

“Facebook is the best one for reaching customers. We rarely advertise what we have for sale. We did do that back at the start but found it wasn’t really working,” she replied.

“I noticed that as I put us in the stories more, stupid stuff that would happen – like William falling in a water trough during lambing – people would jump on the post and massively respond to it,” she added.

She would then get lots of people asking to join the mailing list and now posts at least two or three times a week, which she thinks is important to keep their audience engaged.

“The posts are long and bloggy. I try to make them funny. Me and Gavin had a bit of a marital the other day when we were trying to move the pigs, so I posted about that. People loved it and we got three orders.

“I think it’s more people following our story and our journey. That’s what they are buying into and why they buy their meat from us.

“I use Instagram but I don’t know if that gets me many customers – it’s more to reach other farmers. I started a separate account for the pigs so I can ask lots of questions about them, particularly about having them in the woods,” she added.

“I use Facebook to post on all the local community sites. I’m like ‘Hi, I’m Holly your local farmer, we just live up the road’  which I think –people like. I get quite badly trolled by vegans, but I just ignore it. The few times I’ve engaged is when they say something blatantly wrong about our farm. Somebody once called me a factory farmer and so I replied with a photo of our ‘factory farm’.

“I’m always super polite. I’d never judge or confront anyone – if you want to be a vegan that’s cool,” she said.

“Now we’re at a stage where we can customise our offering a bit, as I have a bit more time,” said Holly.

“We have several regular customers, some who prefer smaller joints, and there are a couple of others who like bigger ones as they have bigger families. I’d say we know our customers really well.”

Recently they introduced a 5kg box to appeal to a wider audience of couples and smaller families which means more admin but has helped them sell nearly three bodies of beef a month.

“The most volatile thing about our business is the butchery; our order can be quite fiddly and we need it all vacuum packed, which they find challenging as they don’t have the man hours to stand there.”

They use the butchery at their local abattoir in Henfield, which works well, but bringing it in-house would give them a lot more flexibility in being able to offer custom cuts and having complete  control over how the meat is packaged and labelled.

Ideally, they would like a facility on farm and are looking into converting a couple of old buildings into a butchery. They would then look to work with a part-time retired butcher, and Gavin is keen to get involved too.

“It’s a big investment,” said Holly, but with meat box sales booming they both think it wouldn’t take long to recoup and it’s another reason for people to visit the farm.

Longer term they would like to run educational tours for schools and other groups. I ask what the family that owns the farm thinks of all the progress they’ve made over the past few years.

“They’re delighted,” replied Gavin, “and are happy to see the farm being farmed and loved by a family as if it were their own.” 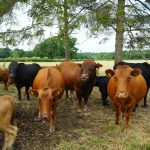 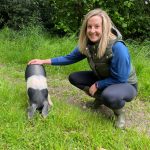 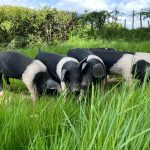 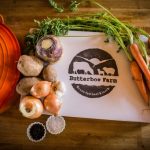 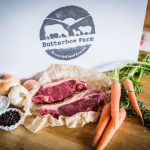 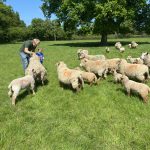 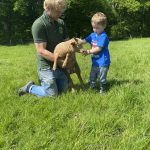 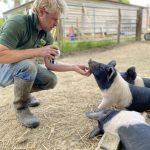 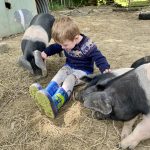 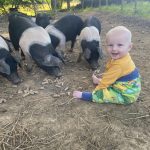 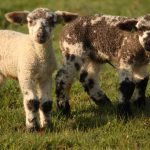 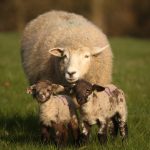 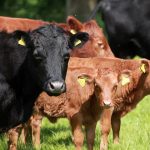